For the second consecutive morning, low temperatures hit their lowest point in over three months and bottomed out at 61 degrees in Baton Rouge. Gradual moderating will begin on Thursday.

Next 24 Hours: Though not quite as cool as previous nights, low temperatures are expected to dip into the mid 60s again. Look for mainly clear skies with calm winds. On Thursday, ample sunshine is on tap. The slight warming trend will continue with high temperatures in the upper 80s.

Up Next: By Friday, high temperatures will challenge the 90s again. Still, not much will be happening in skies. Over the weekend, an onshore wind direction should return some moisture, low temperatures in the 70s and possibly isolated showers for locations closer to the coast. In addition to high temperatures near 90 degrees, that familiar humidity will be felt as well. The small rain chances will quickly diminish again early next week with a bout of warmth and late season humidity. Several days in the 90s are possible next week. CLICK HERE for your detailed 7-Day Forecast. 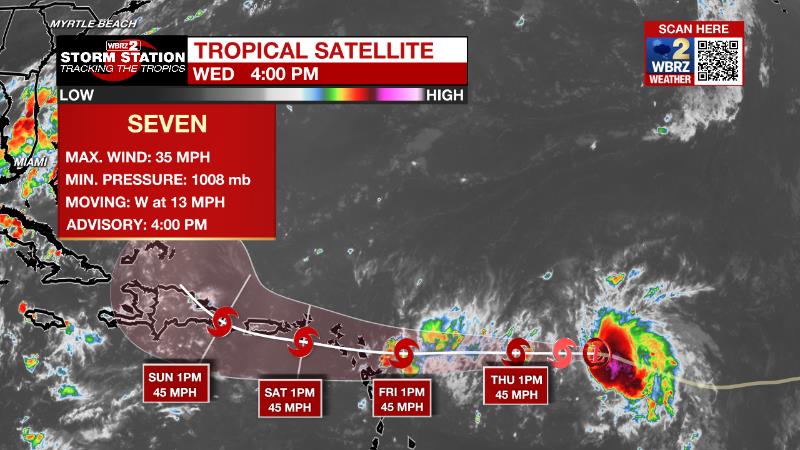 The Tropics: Tropical Depression Seven formed on Wednesday and is moving west toward the Leeward Islands at 14mph. This general motion is expected to continue during the next few days with the center of the system forecast to move through the Leeward Islands on Friday or Friday night, and be near the Virgin Islands and Puerto Rico this weekend. Maximum sustained winds are near 35 mph with higher gusts and some gradual strengthening is forecast during the next day or so, and the depression is forecast to become a tropical storm tonight or Thursday.

The Explanation: The axis of an upper level low over the Northeast U.S. extends all the way to the Gulf of Mexico with the associated cold front just south of land. Pleasant weather is expected to continue with dew point temperatures remaining in the 50s and 60s and total moisture in the atmosphere well below average. This combination of features will make for mostly clear skies and cooler than average nights in the low to mid 60s through Friday morning. By the end of the week, moisture will start to creep back up at all levels of the atmosphere as onshore flow returns. The old front may get drawn slightly northward as a weak upper level trough of low pressure passes to the north. With this, a few showers will be possible, especially south of I-10, over the weekend. However, early next week, an upper level ridge of high pressure will expand over the region causing sinking air and dry, warm conditions.