Today & Tonight: Temperatures today will max out around 95° and the heat index will be 100°-105°. A stray shower will be possible, but you have a better chance of catching a sunburn. Temperatures tonight will be in the mid-70s.

There is also an Air Quality Alert due to some Saharan dust in the atmosphere. The current weather pattern is not allowing the dust to disperse away from the local area. Air quality may be unhealthy for sensitive groups. Sensitive groups, such as people with lung disease (including asthma), heart disease, children and older adults, and people who are active outdoors should limit prolonged exertion. 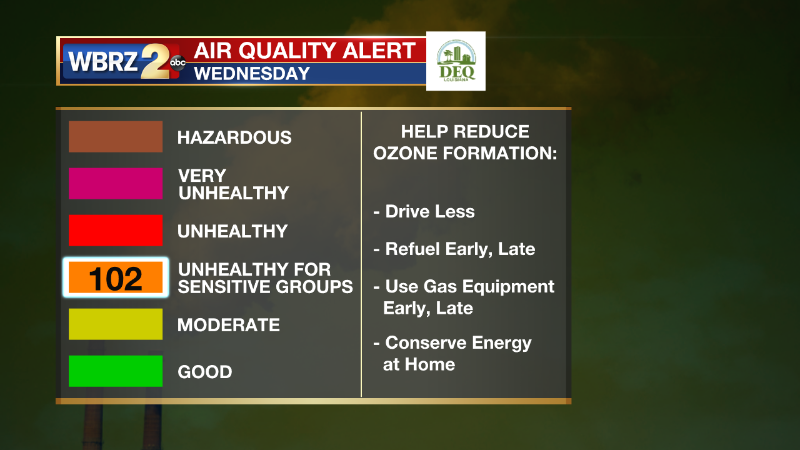 Sun and Heat Safety: Some friendly reminders as the intense heat makes a comeback—sunburn can occur in less than 15 minutes with the extreme U.V. Index typical of this time of year. In addition to that, heat exhaustion and heat stroke can set in just as quickly. Seek medical attention if you or somebody you know is affected. While we all enjoy a list of cool beverages, be sure water is at least a part of that list! Finally, look before you lock. DO NOT leave people or pets in an unattended car.

Up Next: Temperatures will trend in the mid-90s through the rest of the week. Overnight temperatures will fall into the mid-70s. There will be no significant shower activity, but isolated action will be more likely as we head into the weekend. Friday, Saturday, and Father’s Day Sunday will bring isolated showers and storms, but we are not tracking any total washouts. Temperatures will continue to trend in the 90s in the afternoon and in the 70s overnight. Next week, the heat is expected to really turn up. Temperatures will be in the upper 90s, scratching 100° before factoring in the heat index. Click here to see the 7-day forecast.

We are monitoring an area in the Caribbean that could develop over the next 5 days. It will likely run its course in the Caribbean, and it is not expected to impact the local forecast. Continue to check back for updates.

Southwestern Caribbean Sea: Satellite imagery and surface observations indicate that a small area of low pressure is located over the far southwestern Caribbean Sea near the east coast of Nicaragua. This system is currently accompanied by disorganized showers and thunderstorms. Development of this system is possible while it drifts northwestward near the coasts of Nicaragua and Honduras, and it could become a tropical depression later this week if the disturbance remains over water. An Air Force Reserve Hurricane Hunter aircraft is scheduled to investigate this system later today, if necessary. Regardless of development, the low could produce periods of heavy rainfall across portions of eastern Nicaragua and eastern Honduras through late this week.