A summer like pattern of afternoon showers and thunderstorms is ahead. By the weekend, another familiar summer foe, in the tropics, may play a role in our weather.

Today and Tonight: Today will restore the typical summertime pattern of early warmth followed by isolated, afternoon showers and thunderstorms. The best chance for rain today will be found mainly south and east of Baton Rouge—in the coastal areas. High temperatures will top out near 90 degrees prior to any activity developing. The showers can be expected to wane overnight with lows in the low 70s.

Up Next: An uptick in the shower and thunderstorm action is anticipated on Wednesday due to some tropical moisture surging into the area. The workweek will end with the standard warmth and humidity followed by pop-up afternoon showers and thunderstorms. Into next weekend, the local forecast will depend on the tropics as Tropical Depression 3 could spew heavy rain over a portion of the Gulf Coast states. However, it is too early to be sure what track that system will take. Stay tuned, as a reminder that we are now officially in hurricane season. 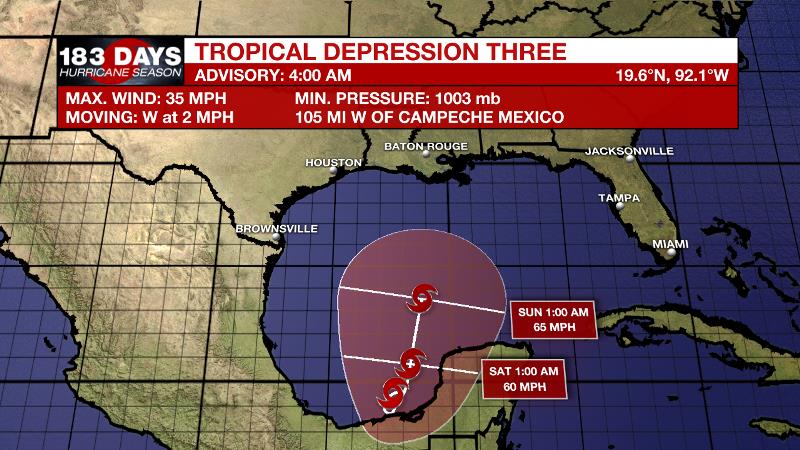 The Tropics: Tropical Depression 3 formed in the Bay of Campeche on Monday. This system is expected to spin in place for several days, possibly strengthening into Tropical Storm Cristobal. It remains unclear if this storm will drift westward into Mexico or take a northern track into the central Gulf of Mexico. Should the second scenario play out, heavy rain could be an issue for parts of the central Gulf Coast this weekend into next week. Details on the storm’s path and strength will become clearer by the end of this week.

The western edge of an upper level ridge of high pressure remains over the local area. Due to this, as well as weak surface winds, convection should remain limited on Tuesday. The latest thinking is that daytime warming and the marine breeze with activate isolated showers and thunderstorms but weak surface winds should keep the storm motions low and therefore confined primarily to coastal areas. As the upper level ridge moves farther east on Wednesday, a shortwave trough of low pressure will move overhead. That, combined with southeasterly surface winds and more abundant moisture will create more robust convection. The moisture will decrease slightly for Thursday and Friday, but an inverted trough of low pressure, tied to a developing tropical system in the southern Gulf will maintain enough instability for typical daytime heating/marine breeze afternoon showers and thunderstorms. Beyond that, the local weather will be highly dependent on the eventual evolution of that area of tropical low pressure in the southern Gulf of Mexico. As of now, the expectation is for this system to park over the Bay of Campeche and slowly develop through the upcoming week. The subsequent track ranges from due west into Mexico to northeast and toward the central Gulf Coast. Obviously, that is a wide range of potential outcomes that will not be clear until this system takes a more pointed direction later this week. Should the central Gulf Coast scenario come to pass, substantial rainfall could become an issue. 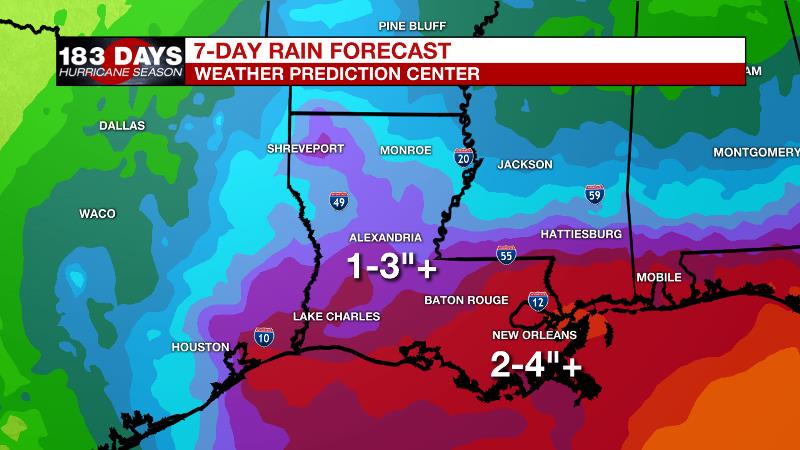 As of now, the Weather Prediction Center’s 7-Day rain forecast through Monday calls for 1-4”+ of rain across southeast Louisiana and southwest Mississippi. At this time, the low is worth attention though as it could bring a heavy rain threat to part of the Gulf Coast if it survives.
--Josh