Temperatures will gradually warm through the weekend. A weak front will come by on Sunday night followed by a more potent system Tuesday or Wednesday.

The Next 24 Hours: After four straight mornings in the 40s, Friday will begin in the mid 50s. A few clouds may appear in area skies overnight. The week will end on a mostly sunny and milder note with highs in the upper 70s. A stray shower is possible near the coast.

After That: The mainly dry pattern now looks to hold through the weekend. By Sunday, temperatures will be a good 5-10 degrees above average and could run for 80. A weakening cold front will pass through by Monday morning but is not likely to produce any showers or significant temperature changes. A more vigorous storm system will move across the Mississippi River late Tuesday into Wednesday. Exactly where the surface low passes is still unclear, but a track farther north would mean just some showers and thunderstorms for the local area while a track farther south would mean severe weather is possible. This is certainly the time of year where these types of event become more common. It is still a long way out, so that is just a timeframe to watch for now. CLICK HERE to view your complete 7-Day Forecast. 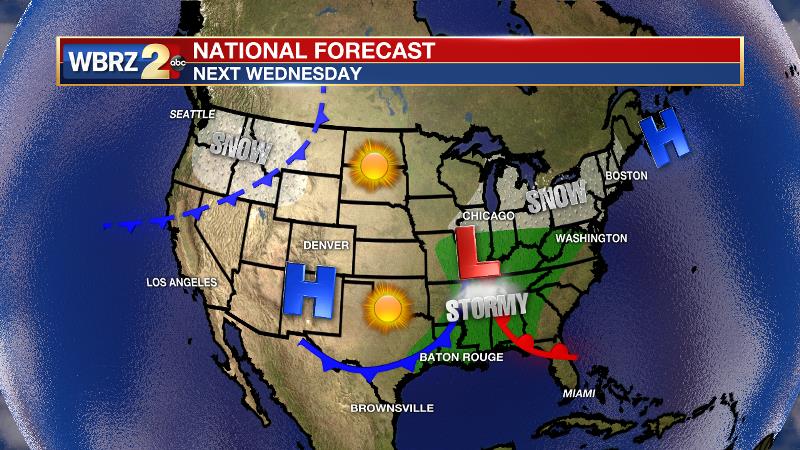 The Tropics: A non-tropical area of low pressure could form between the Bahamas and Bermuda by early next week.  There is a 20 percent chance that this system could develop subtropical characteristics through the middle of next week while it moves northeastward.

The Explanation: The next upper level trough will cause a surface storm system to form over the weekend. Ahead of that, some warmer temperatures and clouds will return with perhaps just enough humidity to aid a coastal shower on Sunday. As the upper trough passes by to the north on Sunday night, a weakening cold front will push through the area on Monday. Therefore, expect minimal precipitation and only slim adjustments to temperatures, which should trend 2-4 degrees cooler. Trailing this system, a more potent trough will develop over the Rocky Mountains and orient more favorably for active weather as it moves into the Mississippi River Valley on Tuesday and Wednesday. Depending on the amount of moisture return that can occur after Monday’s front as well as the track of the upper trough and surface low, this system could become a severe weather threat. At this time, the American model has been more consistent in a track farther north of our area. Meanwhile, the European model has been wavering but currently suggests more impacts to the local area. Since this is beyond the 7-Day Forecast, there is plenty of time to monitor.