Unchanged and starting to search for showers

For a third straight day, poorly mixed air will allow pollutants to settle and ozone to increase. An *AIR QUALITY ALERT* has been issued for the Baton Rouge area from 6am through midnight Thursday. Levels are low enough that only those with breathing sensitivities such as asthma would be affected by spending longer periods outside. You can reduce emissions by driving less and refueling very early or very late in the day. In addition, the U.V. Index is very high at 9, making sunburn times less than 20 minutes. Also, grass, weeds and tree pollen is moderate.

Today and Tonight: At least one more afternoon is ahead with very little change expected in the weather pattern. Mostly sunny skies and low to no humidity will allow high temperatures to climb into upper 80s and low 90s. Winds will be light and southwesterly. Overnight low temperatures will be in the upper 60s beneath mainly clear skies.

Up Next: On Friday, return flow off the Gulf of Mexico will allow low-level moisture to increase. Initially, this will result it a bit more humidity to end the week as skies stay mostly clear to partly cloudy. By the weekend, just enough moisture should be available for daytime heating to trigger an isolated shower or thunderstorm on Saturday afternoon. Overall, it appears as though outdoor events including LSU Baseball will not meet much weather resistance over the weekend. 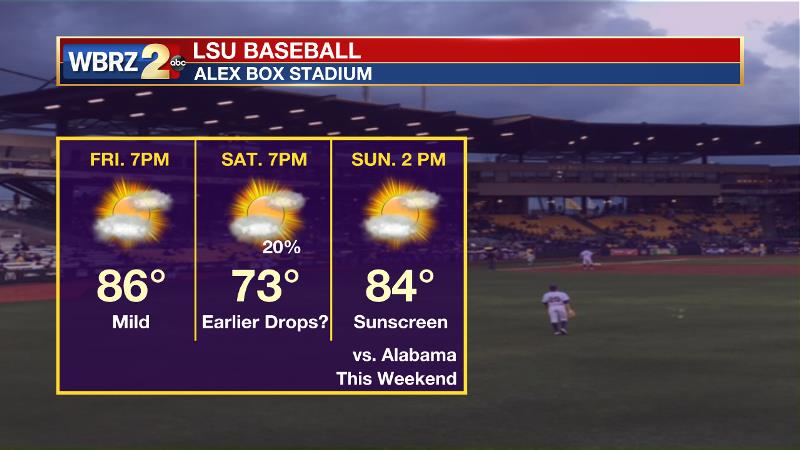 Though small, Saturday appears to be the best shot at rain in the 7-Day forecast. Running a one-inch deficit for the month, the Climate Prediction Center 2 week forecast offers only a small chance of above average precipitation. Keep watering those lawns and gardens! There are signs that a slow-moving upper level disturbance could bring more appreciable rain chances for the middle and end of next week. 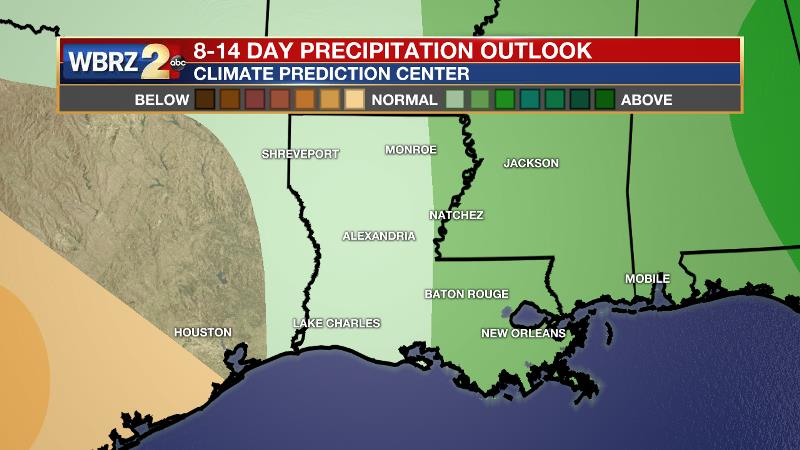 An area of high pressure at the surface will move from the northern Gulf to Georgia by Saturday. The high will be close enough to the local area to keep convective development at bay through Friday. Thanks to mostly sunny skies during the afternoons, high temperatures will continue to outrun forecast model guidance. 90 degrees seems possible each of the next two afternoons. Additionally, since humidity will be slow to return, the more efficient warming properties of dry air support this idea of highs going above model guidance. A more southerly flow will return by Saturday. By that time, the atmosphere may uncap just enough for this moisture to trigger an isolated afternoon shower or and thunderstorm. However, rain chances will remain quite low for the time of year. A ridge over the Southeast will create low rain chances and continue warm temperatures into early next week. Thanks to onshore flow, dew points in the upper 60s will make it feel a bit more humid than this week. There are some signs in the forecast models that an upper level trough moving from east to west across the Gulf of Mexico could enhance rain chances by the middle of next week but it is still too early to place any bets on this.