Chief Meteorologist @DrJoshWX with an update on the FLASH FLOOD WARNING in place across parts of #BatonRouge. The full forecast is available right, here: https://t.co/gahuyNzhsg pic.twitter.com/IHS8FzMyrK

The number of showers and thunderstorms that developed on Tuesday was considerably fewer than Monday. Heat remains the main player in the weather game.

Next 24 Hours: Once any stray showers diminish, skies will largely clear. Low temperatures will stop in the mid 70s and it will continue to feel very sticky. Hump Day will begin with blue skies and sunshine. High temperatures are expected to reach 93 degrees with humidity sending feels-like temperatures to between 105 and 108 degrees. The *HEAT ADVISORY* has been extended to a sixth consecutive day. Isolated showers and thunderstorms will pop-up around about 30 percent of the 13 Parish, 3 County forecast area during the afternoon.

Up Next: Thursday and Friday, a weak upper level disturbance may race across the Gulf of Mexico from east to west. While this may slightly increase showers and thunderstorms, it will barely be noticeable when compared to the beginning of the week. Rain coverage in the viewing area should stay between 30 and 50 percent. By next weekend, conditions could turn even drier and hotter with some highs potentially reaching 95 degrees. A weak front is expected to move into the area early next week resulting in an uptick of showers and thunderstorms and some slightly cooler temperatures. CLICK HERE for your full 7-Day Forecast. 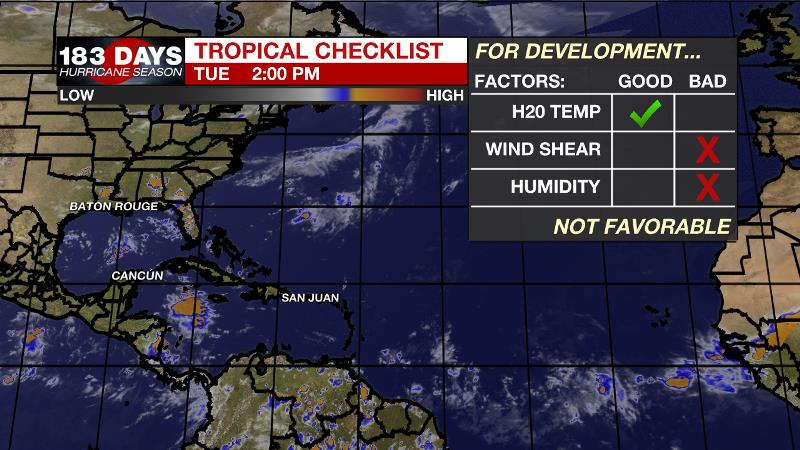 The Explanation: The axis of an upper level ridge of high pressure will build over the area from the Midwest. This will result in lower daily rain coverage than previously expected, perhaps around 20 to 40 percent. On the southern edge of this ridge, a weak inverted trough may ride over the Gulf of Mexico late Thursday into Friday to provide a slight enhancement in showers and thunderstorms, but the activity could be held offshore due to the advancing ridge. By Saturday and Sunday, atmospheric moisture is expected to be at or even below average for the time of year while the upper level ridge centers over the Gulf Coast. Not only will the associated sinking air push rain coverage back down to very isolated but it will also raise temperatures. The best chances for cooling showers will likely be near the coast for locations on the southern perimeter of the upper level ridge. The weekend could feature highs that easily achieve the mid 90s, or higher. Another pattern switch is on tap for next week. An unseasonably deep upper level trough will dig into the Eastern U.S. on Monday and Tuesday sending a cold front into the Southeast. These features will combine for a few days with more widespread, possibly heavier showers and thunderstorms. However, if the front can actually pass through the area, which is possible though unlikely, we could feel a nice dip in humidity.