Well above average afternoon temperatures and morning fog will remain the weather headlines through the week. A better shot at showers will come this weekend.

Next 24 Hours: Some clouds will linger overnight. Meanwhile, dew point temperatures in the mid to upper 60s and southerly winds will continue to bolster lows in the upper 60s. Those readings are in line with average highs for the month, not overnight temperatures! In the muggy air mass, some patchy fog may develop close to daybreak. Wednesday will be a continuation of the unseasonable warmth. As some sun works out into the afternoon hours, highs will top out in the low 80s again. A sprinkle or too is possible from any afternoon clouds thanks to the overabundance of moisture in the atmosphere for the time of year.

Up Next: Thursday and Friday will be partly sunny and rather warm with high temperatures topping out in the low 80s—especially in areas that receive the most sunshine. Mornings will be mild with low temperatures in the mid 60s. Patchy fog will remain possible. A weakening front will approach the area on Saturday causing increasing clouds and possibly a shower. This front will stall in the area resulting in isolated showers and temperatures in the mid 70s on Sunday. A strong front and better chance of rain and thunderstorms is expected early next week, although confidence in the timing and specific impacts of that feature is currently low. CLICK HERE for your detailed 7-Day Forecast.

The Explanation: Once again, the excess low level moisture and continued onshore flow may allow for some patchy fog formation overnight into Wednesday. An upper level ridge of high pressure will remain parked over the Gulf Coast and will protect the region from any upper level disturbances that try to spark showers. Sinking air beneath the ridge will keep much warmer than average temperatures in place. With daytime warming and ample low level moisture, some clouds will continue to develop. Perhaps one can squeeze out a few sprinkles. The ridge will hold sturdy Friday into the upcoming weekend. A very weak upper level trough will moves well north of the area sending a weakening front into the region on Saturday. Any substantial precipitation with this system is expected to still well north of the local area. An isolated shower will be possible on Saturday followed by a slightly better chance on Sunday, especially with the front stalled in the region. 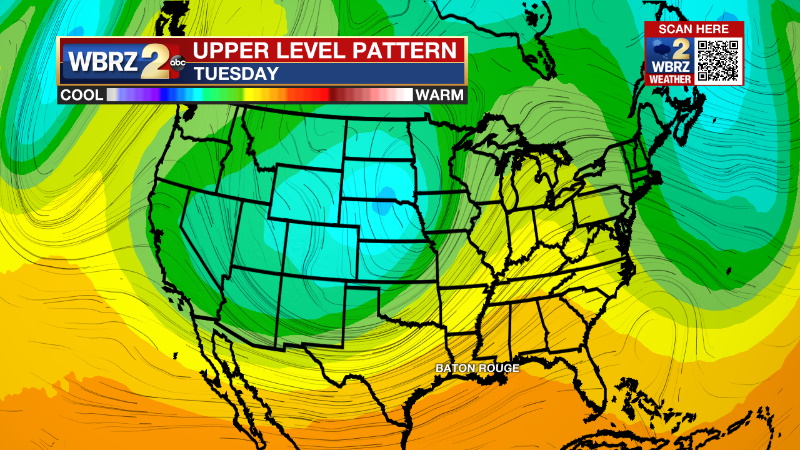 A much deeper and stronger trough will dig into the Mountain West early next week, which could be the next major storm system for parts of the Southeastern U.S. This one will bring the potential for widespread rain, thunderstorms and perhaps a more significant drop in temperatures. It remains too early for fine details.