Hot temperatures will carry the central Gulf Coast out of astronomical summer and into fall. The tropics are rather busy and at least one wave is worth watching, locally.

Next 24 Hours: Expect clear skies and mild temperatures overnight with lows in the low 70s. Wednesday will be mainly sunny and warm with highs in the mid 90s. Thermometers would need to reach 96 degrees to tie a record at Metro Airport. A stray, late day shower is possible, especially south and east of Baton Rouge.

Up Next: Thursday will be the hottest of the week and the entire forecast period. Beneath a dominant ridge of high pressure, sinking air will cause abundant sunshine and warmer than average temperatures that top out between 95 and 97 degrees. Since humidity will not be at July and August levels, feels-like temperatures should be around 100 degrees. A weakening front will come into the area Friday and do little more than drop dew points by a couple of degrees. It will remain warmer than average over the weekend with highs in the low 90s. A more substantial cold front will come into the area late Sunday helping a few showers and thunderstorms develop until it passes Monday. On the other side of that front, drier and more seasonable air is expected with highs in the upper 80s and lows in the mid 60s for much of next week. That front could also play a critical role in steering any tropical system that may approach the southern Gulf of Mexico next week (more below). CLICK HERE for your detailed 7-Day Forecast. 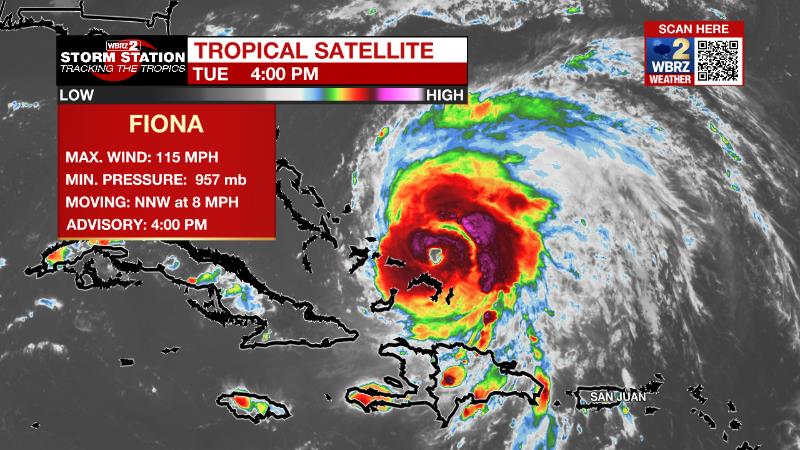 The Tropics: Hurricane Fiona continues to bring impactful weather to The Turks and Caicos. As of 4pm Tuesday, Fiona was producing maximum sustained winds of 115mph and moving northwest at 8mph. Strengthening will continue over the next few days as Fiona turns northeast and accelerates. This storm could threaten Bermuda on Thursday.

A tropical wave located a few hundred miles east of the Windward Islands continues to show signs of organization.  There is an eighty percent chance of additional development and a tropical depression is likely to form within the next few days as the system moves westward to west-northwestward at 15 to 20 mph across the eastern and central Caribbean Sea. 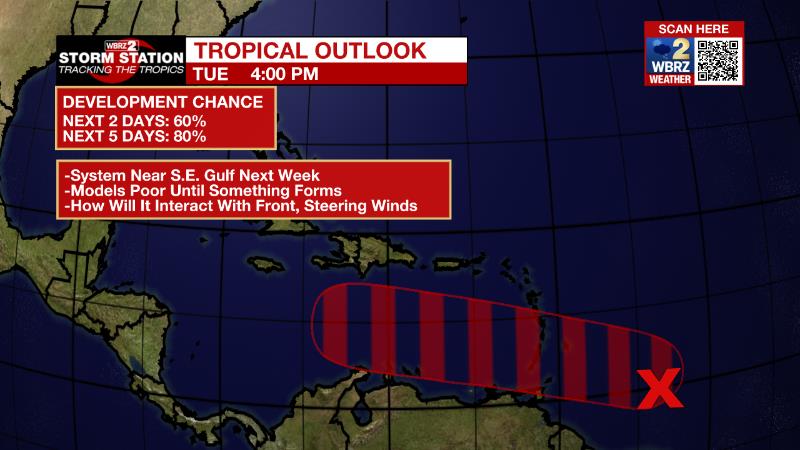 This system will enter a favorable environment for strengthening atop very warm water and below low wind shear. A lot of guidance, that stretches beyond the scope of what would be considered reliable, does place a tropical system near the southeastern Gulf of Mexico around the middle of next week. Keep in mind that until a system has formed a closed circulation and become a depression, forecast models do no not perform well. We are still very much in the middle of hurricane season and should continue to monitor this system and remain prepared.

Tropical Storm Gaston formed in the north, central Atlantic Ocean on Tuesday afternoon. Gaston was producing maximum sustained winds of 40mph and moving northeast at 17mph. Additional strengthening is possible over the next day or so before the storm turns east. It is not a threat to the United States.