Thursday PM Forecast: front knocking back warmth over the weekend

The final day of the workweek will be rather warm ahead of an approaching front. That system will pass through without rain early this weekend as we near one month without substantial precipitation.

Next 24 Hours: Expect clear skies overnight with low temperatures bottoming out in the low 60s. Friday will be the warmest of the week with several locations notching high temperatures in the upper 80s and one or two spots possibly nipping 90 degrees. A few cumulus clouds may bubble up with the daytime warmth.

Up Next: A cold front will sag south through the area on Saturday morning. That system is likely to pass without rain; and it will be followed by a sunny and mild afternoon with north winds of 5-10mph. LSU Football fans can expect clear and quiet weather for tailgating. For the 11am game, temperatures will begin in the mid 70s and warm into the mid 80s. Southern fans will feel warmer temperatures over in Prairie View, Texas. Afternoon temperatures will top out in the 90s and remain there through the 4pm kickoff. Overnight temperatures will return to the 50s Saturday and Sunday night. There next chance for showers appears to be in sight toward the middle and end of next week. CLICK HERE for your detailed 7-Day Forecast.

The Tropics: A disturbance in the southern Caribbean Sea continues to get better organized and is expected to become a tropical storm and eventually a hurricane. The system will bring wind and rain to the ABC Islands and northern South America while moving west at 15-20mph. With gradual strengthening expected, Hurricane Julia will approach Nicaragua this weekend. 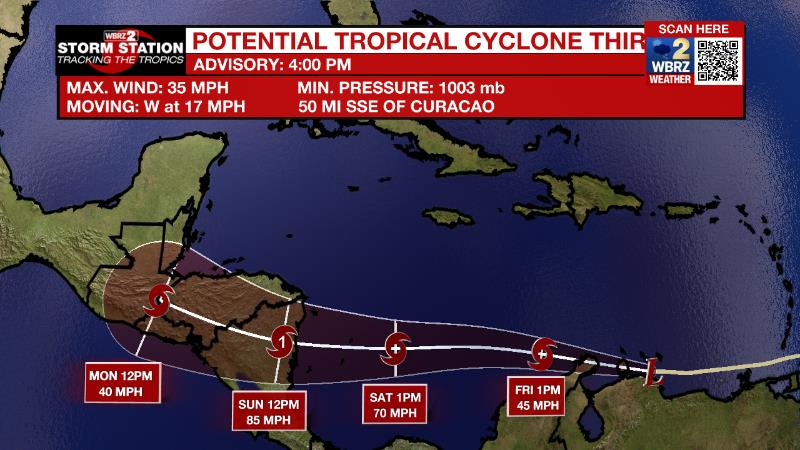 As of 4pm Thursday, Tropical Depression Twelve was well west of the Cabo Verde Islands moving northwest at 15mph with maximum sustained winds of 35mph. It is expected to become a remnant low by Friday morning.

The Explanation: A surface high pressure system will settle just north of our region by Friday. Aloft, the wind flow will become zonal (west to east) through the rest of the forecast period, bringing much of the same weather as we have been seeing for the last few weeks. By Friday night, a weak cold front is forecast to move toward our region. Without a high quality moisture return and the weak nature of the system, rainfall is not anticipated. With that dry frontal passage on Saturday, temperatures will trend down just a bit. The GFS model is a tad more aggressive with this front compared to the ECMWF, and puts high temperatures in the low to mid 80s and low temperatures in the mid to upper 50s for this weekend and early next week. By the middle of next week, a more robust upper level trough of low pressure could finally bring a chance of some rain to the area.