Thursday PM Forecast: back into an active pattern

Rain will be a possibility each of the next seven days. Any heavy thunderstorms could cause some brief, localized poor drainage flooding.

Up Next: Over the weekend, deep tropical moisture will remain in the atmosphere, but there may be a lack of a trigger for showers and thunderstorms other than daytime warming. After high temperatures reach the upper 80s and low 90s, look for scattered afternoon activity. Neither day looks like a washout, but outdoor plans could be chased inside at times. A favorable setup for the daily douse will be in place next week. A round of showers and thunderstorms is possible, if not likely, each afternoon. Since precipitation will develop rather quickly, high temperatures will not do much better than the upper 80s. Nights will be quieter with low temperatures in the low 70s. CLICK HERE for your detailed 7-Day Forecast. 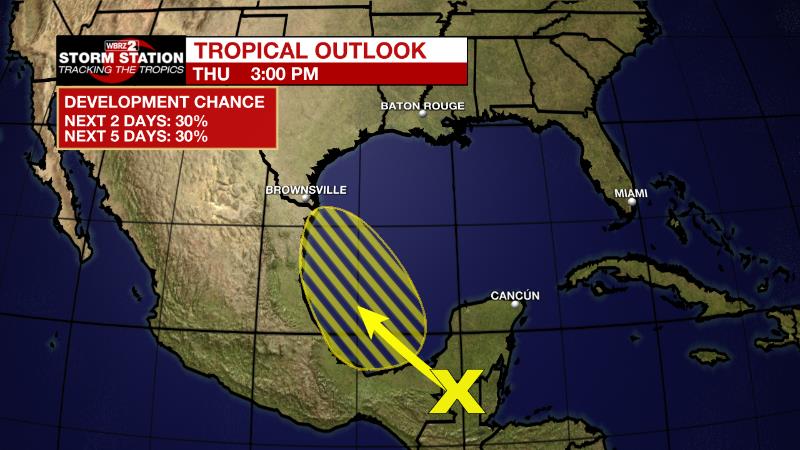 The Tropics: The showers and thunderstorms associated with a tropical wave located over northern Guatemala and southeastern Mexico, have become a little better organized since Wednesday. This system is forecast to emerge in the Bay of Campeche Friday, where an area of low pressure could form. After that, there is a 30 percent chance of additional, slow development of this system while it moves northwestward over the southwestern Gulf of Mexico.  By Saturday night, the system is expected to move inland over northeastern Mexico.

Aug. 17, 2022 -- for the first time in 2+ #hurricane seasons, we are at a point in the calendar where observed tropical activity has been below average to date. pic.twitter.com/dYcLTlXMzc

The Explanation Deep tropical moisture has returned to the area. Even though a dissipating front will drift north on Friday, upper level winds out of the southwest will continue to pump moisture into the region and send numerous disturbances through. These features will generate the lift needed for continued rounds of showers and thunderstorms. Due to this, you can expect some rain at "off-peak" times, with Friday morning being one example. To a slightly lesser extent, more of the same is expected this weekend before the next big weather feature moves into the region. A strong, upper level trough of low pressure will dip into the Lower Midwest by Monday with yet another poorly defined front drifting into the region. Tropical moisture remaining in place, enhanced lift due to southwest flow on the east side of the upper level trough and the weak front will all aid in scattered to widespread showers and thunderstorms each day through the first half of next week.