Thursday AM Forecast: The next cold front is on its way

The cold front is on its way here!

Today & Tonight: Temperatures today again will be just a touch warmer. This afternoon will bring mostly sunny skies and temperatures in the upper 80s. Baton Rouge will max out at 88°. A few spots south of Baton Rouge could hit the 90s. Tonight, temperatures will be in the low 60s.

Up Next: As we anticipate the next cold front, temperatures will continue to climb little by little. Friday afternoon high temperatures will be near 90°. Overnight temperatures will be in the mid 60s and muggy. A cold front is set to move through clearing out the clouds on Saturday. Cooler air will be more noticeable Sunday morning with temperatures in the upper 50s. The cold front will also bring the humidity down and keep all the tropical activity confined to the Caribbean. Clear skies will last through the first half of the week. Starting Wednesday, isolated showers are back in the forecast. Click here to see the 7-day forecast.

The tropical wave in the eastern Caribbean is organizing, but it not expected to enter the Gulf regardless of development. If/when it develops, it will be called Tropical Depression Thirteen. 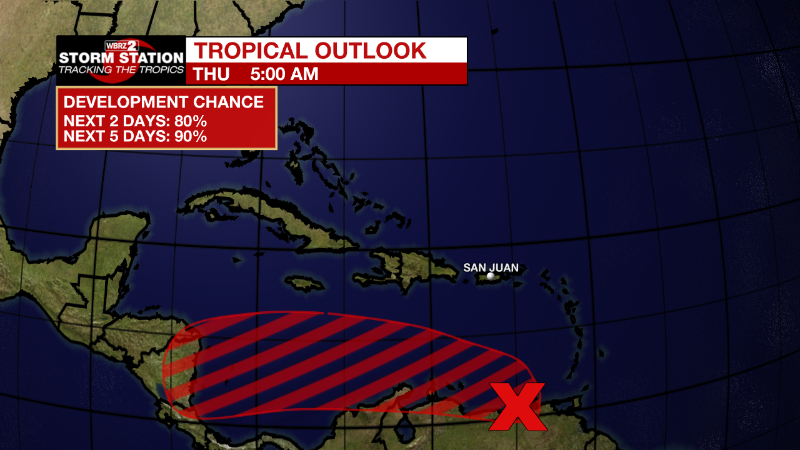 Southeastern Caribbean Sea:
An area of low pressure located over the far southeastern Caribbean Sea is producing a large area of showers and thunderstorms over the southern Windward Islands, northern South America, and adjacent waters. Satellite-derived wind data indicate that this system does not yet have a well-defined center of circulation. While land interaction with the northern coast of South America may hinder significant development during the next day or so, environmental conditions are expected to be mostly conducive for development as the system moves generally westward, and a tropical depression is likely to form in the next couple of days by the time the system
enters the south-central Caribbean Sea.

Regardless of development, heavy rainfall with localized flooding, as well as gusty winds to gale force, are expected over portions of the Windward Islands, northern portions of Venezuela including Isla Margarita, and the ABC Islands during the next day or two. Interests in those locations, in addition to those in Central America, should continue to monitor the progress of this system.
* Formation chance through 48 hours...high...80 percent.
* Formation chance through 5 days...high...90 percent.