August 2022 was the 10th wettest on record with 10.29 inches of rain. The beginning of climatological fall has been dry, but that will not last for long.

Next 24 Hours: Mostly clear skies will prevail this evening with low temperatures stopping just above average around 74 degrees. The forecast for Friday has trended drier than previously thought. Just a stray shower or thunderstorm will be around in the afternoon. With much more dry time, most neighborhoods will warm up to about 93 degrees with partly sunny skies.

Up Next: Moisture from the Gulf of Mexico will surge back into the area Friday night. As a result, scattered to widespread showers and thunderstorms are anticipated both weekend days. The return of more rain and more clouds will limit high temperatures to the upper 80s, which is only three, or four degrees below average for early September. Higher rain coverage with slow moving thunderstorms for a few consecutive days could again heighten the concerns for street and poor drainage flooding through at least Monday. If you are traveling to New Orleans for the LSU Football season opener, do plan to dodge showers and thunderstorms before the game. Of course weather will not be a factor inside of the dome and the drive home will be dry. CLICK HERE for your detailed 7-Day Forecast. 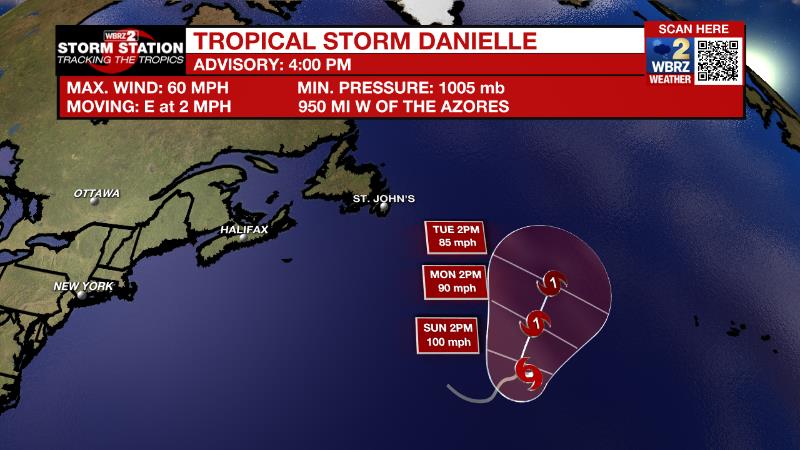 The Tropics: Tropical Storm Danielle is intensifying over the open water of the central Atlantic Ocean. With maximum sustained  near 60 mph, strengthening is forecast during the next few days, and Danielle is expected to become a hurricane by Friday while remaining nearly stationary. 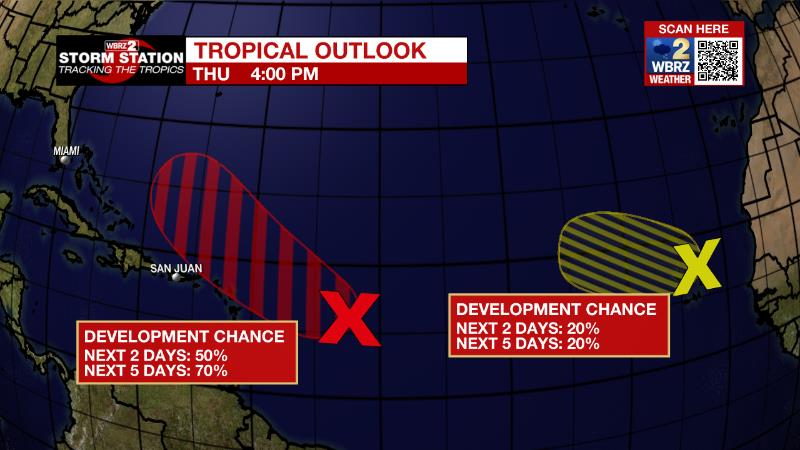 Showers and thunderstorms associated with a broad area of low  pressure located several hundred miles east of the Leeward Islands  have recently decreased in coverage. Although environmental conditions remain only marginally conducive, there is still a seventy percent chance of a tropical depression developing. The disturbance is forecast to move slowly west-northwestward, toward the adjacent waters of the northern Leeward Islands.

Satellite imagery and surface observations show that a broad area of low pressure is located over and to the northwest of the Cabo Verde Islands. The associated shower activity has diminished through the day. There is still a twenty percent chance for the system to become a short-lived tropical depression within the next day or so.

The Explanation: Drier air will remain in the atmosphere through Friday afternoon making it harder for showers and thunderstorms to develop. Convection may not be absent, especially near the coast, but most will stay dry. The front responsible for the drier air will retreat north and stall Friday into the upcoming weekend. With deeper tropical moisture returning, scattered to widespread showers and thunderstorms will develop. Steering winds will be light and so movement will be based on marine breezes and storm outflow. The area is only just beginning to dry out from a wet August and so any spot that is hit with multiple heavy storms in a few days could have some nuisance flooding issues develop. With the increase in shower and thunderstorm activity, high temperatures will be several degrees cooler in the mid 80s. Late in the weekend and early next week, a broad, upper level trough will remain over the central Gulf Coast. Daytime warming will continue to allow daily showers and thunderstorms, perhaps tapering a bit in coverage by the end of next week.