More sun is ahead of the remainder of the week and this will allow gradual temperature moderation. Astronomical Spring begins on Wednesday at 4:58pm as the most direct rays from the sun move north of the equator and daylight time continues to get longer in the northern hemisphere. For better record keeping, months are grouped into climatological seasons offering more even three-month spans of similar weather. Climatological spring began on March 1.

Today and Tonight: The weak upper level disturbance that created clouds on Monday will push east of the area this morning. Expect much more sunshine but thanks to a weak reinforcing cold front, high temperatures will be similar to Monday’s upper 60s with continued northeasterly winds. Overnight will be mostly clear with lows in the low 40s. 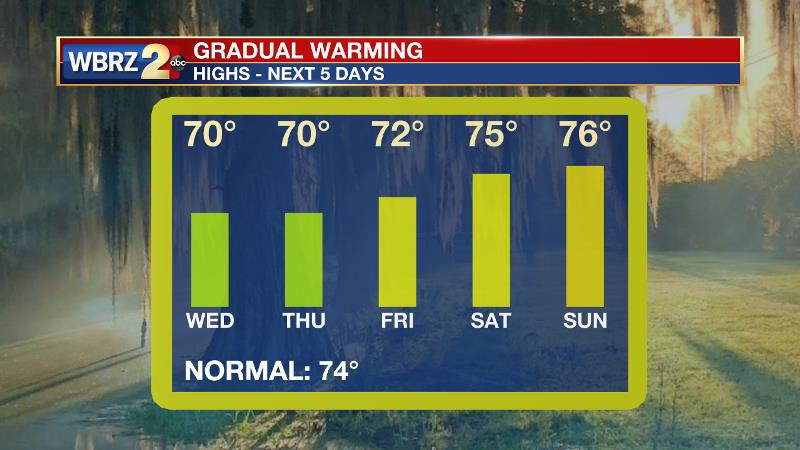 Up Next:  Highs will break into the low 70s by Wednesday. Sunny to mostly sunny skies stay the course through the rest of the week. Another weak front will not cancel warming, but keep it gradual with highs warming into the mid 70s and lows increasing into the low 50s by the weekend. The next significant shot at rain will hold off until at least Sunday or Monday and it is too early to hash out any details on this one. 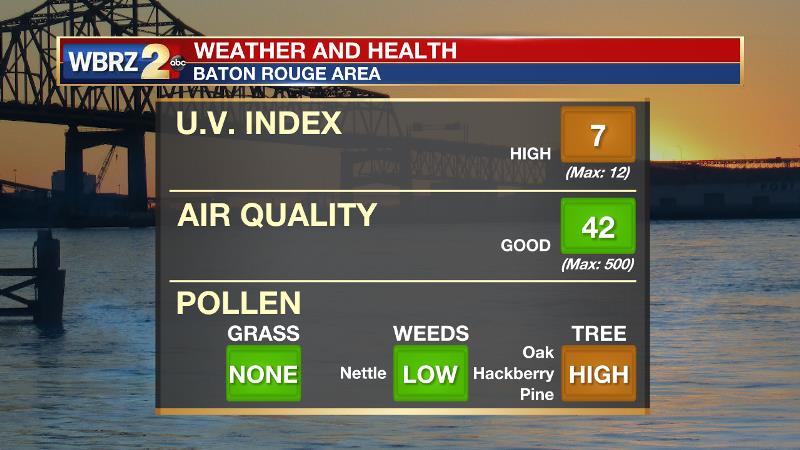 The Mississippi River: At Baton Rouge, major flood stage continues with a level of 44.0’ as of Tuesday morning. Due to rover flooding and drainage north of the area, runoff will keep the river near this crest for the next several days. The high water is primarily an issue for river traffic and river islands, although some inundation will continue for a few spots north and south of Baton Rouge that are not protected by levees. Unprotected low-lying areas will be flooded and agricultural operations will be impacted on the west side of the river. The grounds of the older part of Louisiana State University's campus become soggy. This includes the area around the Veterinary Medicine building, the Veterinary Medicine Annex, the stadium and ball fields. The city of Baton Rouge and the main LSU campus are protected by levees at this level.

By Tuesday a plume of mid-level moisture will finally depart east and surface high pressure will help to open up skies to a bit more sunshine. A reinforcing front will move through the area Wednesday night but will be passing by dry. There is a slight possibility of a shower but no measurable rain is anticipated through Saturday at this point. The weak boundary will not even be capable of significantly shifting wind direction. Only by Friday will winds stream easterly and allow a bit of moisture to return ahead of a weak front. While the near term is quite and straightforward, forecast model guidance is in disarray for the long-term portion of the forecast. The American model brings a weak front through on Sunday with possibly a few showers. The European model brings a much more dynamic storm system through Monday into Monday night with potential for strong to severe thunderstorms. Some of this should be cleared up in the days to come.