The above average heat will be halted by showers and thunderstorms on Wednesday. Standard August weather should be restored for the end of the week.

Today and Tonight: Make no mistake about it August is a hot month. Although the steam relief will be slight, afternoon clouds, showers and thunderstorms keep thermometers and feels-like temperatures in check. Expect high temperatures to stop in the low 90s near lunchtime. It will be humid, so feels-like temperatures will still be close to 100 degrees but farther from the dangerous heat indices experienced over the last five days. By mid to late afternoon, a weak front will kick out a round of rain and thunderstorms.

Today, long duration heat should be reduced by widespread clouds and thunderstorms. There is plenty of energy and moisture available for these storms, so some could be strong. Remember to go inside if you hear thunder and not to drive across flooded roads! #BatonRouge pic.twitter.com/YsBPLCSXzX

Ample instability will mean that some thunderstorms could produce gusty wind. Additionally, very heavy rainfall will be possible with “off the chart” moisture in the atmosphere according to the National Weather Service. Some locations could see rainfall amounts as high as 3 to 4 inches. Expect some areas of street and poor drainage flooding.  Showers and thunderstorms may linger into the overnight hours with low temperatures in the mid 70s.

Up Next: Isolated showers and thunderstorms will stay in play on Thursday as the weak front washes out over our region. Fewer will be around on Friday and Saturday. Temperatures will still be hot, but closer to average with highs in the low 90s and lows in the mid 70s.

A weak front will move into the region on Wednesday. The center of the upper level ridge will slide into the Southwest U.S. The relief provided by this front will not really come via cooler temps but more so because of greater coverage of rain, thunderstorms and clouds. There is an outside chance of some severe storms on Wednesday and the Storm Prediction Center has introduced a “marginal risk” of severe weather.  Storms will be capable of gusty wind and frequent lightning. 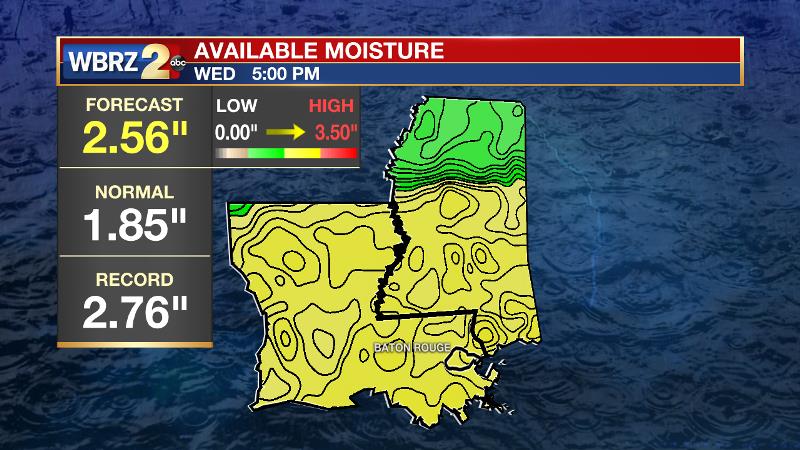 Precipitable water, or atmospheric moisture content, will be near record levels on Wednesday meaning thunderstorms will be capable of very heavy rain

The Weather Prediction Center has also placed the area in a “marginal risk” for excessive rainfall as precipitable water values are expected to be near record levels and thunderstorms will be moving very slowly. Street and poor drainage flooding will be likely in some locations. The weakening front will stall along or just south of the coast. Convergence along the front will lead to development of showers and thunderstorms but this may be confined to coastal areas to end the week. By the weekend, models diverge on whether or not the ridge builds back over the region. The ECMWF has been more consistent than the GFS over the last two weeks so we will favor that outcome, which would lead to at, or slightly above average temperature an only isolated convection.