A drier weather pattern is setting up to start the workweek. At least through Wednesday, daily rain coverage will be very low.

Today and Tonight: Mostly sunny skies welcome the new week. There is an outside shot at a pop-up shower, but very few will benefit from a cool down. High temperatures will reach near 93 degrees, with calm winds. Overnight will be mostly clear with low temperatures around 75 degrees.

Up Next:  An upper level ridge is setting up over the Gulf Coast for the beginning part of the week, which will bring drier conditions through Wednesday. We still could see some isolated showers or thunderstorms during this period, but minimal chances will stay confined to peak afternoon hours. Temperatures will also be soaring above average and into the mid 90s, which should be peaking on Tuesday. This ridge will break down by Thursday, which will open the door to a short wave trough from the north. This trough will help to increase moisture and storm chances Thursday through Saturday, which will also help to cool high temperatures back down into the low 90s. 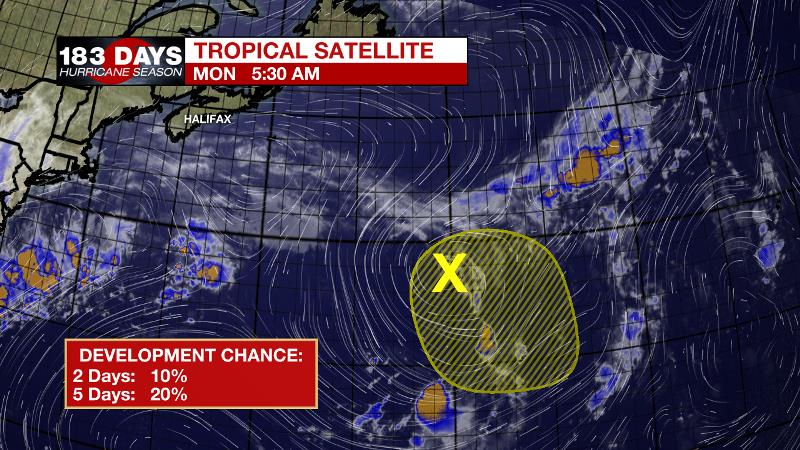 The Tropics: After a busy week, the Eastern Pacific has quieted down. Meanwhile, the Atlantic Basin remains (fingers-crossed) a hostile environment for tropical cyclone formation. Only one non-tropical low pressure area exists in the north central Atlantic Ocean and this will drift southeast over the next 5 days with just a 20 percent chance of development. This minor disturbance is not a threat to land.

A weak subsidence high aloft coinciding with a surface based Bermuda ridge extension should offer lower than normal rain coverage through Tuesday. With summer heat and humidity, isolated shower and thunderstorm development is possible near subtle boundaries due to the gulf breeze. Temperatures will be near normal. A trough will begin to break down the ridge and develop a weak front north of the region. Some convection along the boundary may advance southward and possibly augment the sea breeze activity by Friday. The trough will broaden and sustains this weekend to place the area in favorable position continued showers and thunderstorms, possibly even at night. Expect increased areal coverage during the daytime hours, possibly lingering into the evenings Saturday and Sunday. Temperatures will trend down a few degrees due to extensive cloud cover and rain cooling.