Sally makes landfall, drier conditions for the end of the week

Hurricane Sally made landfall this morning and conditions are very pleasant at home.

Today and Tonight: As Hurricane Sally continues to impact coastal Mississippi, Alabama, and Florida, the Baton Rouge area will remain mostly dry today. Temperatures will heat to near 89 degrees with building clouds in the afternoon and breezy winds. Just a few isolated showers are possible in the evening hours, but the majority of the area will stay dry. Overnight lows will be near 72 degrees.

Hurricane Sally made landfall at 4:45 am as a category 2 hurricane near Gulf Shores, Alabama. The maximum winds at the time were near 105mph and heavy rain continues to fall.

In addition to Sally, both Paulette and Teddy are at hurricane strength in the open Atlantic. Teddy is forecast to become a major hurricane (category 4) before weakening to near category 2 as it approaches Bermuda.

We are also watching an area off the western coast of Africa with a high chance of tropical formation over the next 5 days. None of the new developments are a threat to the local forecast at this time.

At 400 AM CDT (0900 UTC), the center of the eye of Hurricane Sally was located an Air Force Reserve Hurricane Hunter aircraft and NOAA Doppler weather radars near latitude 30.1 North, longitude 87.7 West. Sally is moving toward the north-northeast near 3 mph (6 km/h). A north-northeastward to northeastward motion at a slightly faster forward speed is expected later today and tonight, followed by a faster northeastward motion on Thursday. On the forecast track, the center of Sally will approach the northern Gulf Coast this morning, and make landfall in the hurricane warning area later today. Sally is then expected to move inland across southeastern Alabama tonight.

Recent data from An Air Force Reserve reconnaissance aircraft and the Mobile Alabama Doppler weather radar indicate that maximum sustained winds are near 105 mph (165 km/h) with higher gusts. Some slight increase in strength is possible before the center of Sally's eye makes landfall later this morning. Rapid weakening is expected after landfall occurs. 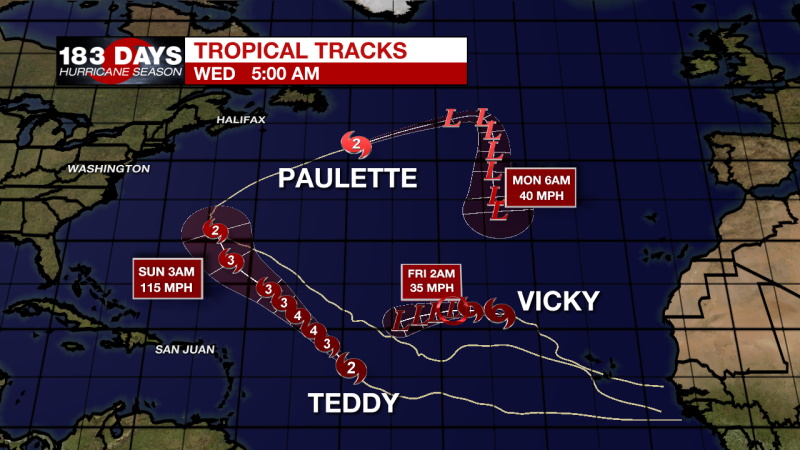 At 500 AM AST (0900 UTC), the center of Hurricane Paulette was located near latitude 41.9 North, longitude 49.1 West. Paulette is moving toward the east-northeast near 29 mph (46 km/h), and this general motion is expected into Thursday. Afterward, Paulette is forecast to slow down and turn toward the south-southeast and south late Thursday and Friday. Maximum sustained winds are near 100 mph (155 km/h) with higher gusts. Although gradual weakening is forecast, Paulette is expected to become a powerful extratropical cyclone later today. Hurricane-force winds extend outward up to 80 miles (130 km) from the center and tropical-storm-force winds extend outward up to 255 miles (405 km). The estimated minimum central pressure is 966 mb (28.53 inches).

At 500 AM AST (0900 UTC), the eye of Hurricane Teddy was located near latitude 15.8 North, longitude 49.0 West. Teddy is moving toward the northwest near 12 mph (19 km/h). This general motion is forecast to continue for the next few days. Maximum sustained winds have increased to near 100 mph (155 km/h) with higher gusts. Some strengthening is forecast during the next few days, and Teddy is likely to become a major hurricane later today and could reach category 4 strength on Thursday. Hurricane-force winds extend outward up to 25 miles (35 km) from the center and tropical-storm-force winds extend outward up to 175 miles (280 km). The estimated minimum central pressure is 976 mb (28.82 inches).

At 500 AM AST (0900 UTC), the center of Tropical Storm Vicky was located near latitude 21.6 North, longitude 33.9 West. Vicky is moving toward the west-northwest near 9 mph (15 km/h). A westward motion is expected to begin later today, followed by a west-southwestward motion by late Thursday. Maximum sustained winds are near 50 mph (85 km/h) with higher gusts. Gradual weakening is forecast over the next few days, and the system could become a remnant low on Thursday or Friday. Tropical-storm-force winds extend outward up to 80 miles (130 km) from the center. The estimated minimum central pressure is 1004 mb (29.65 inches). 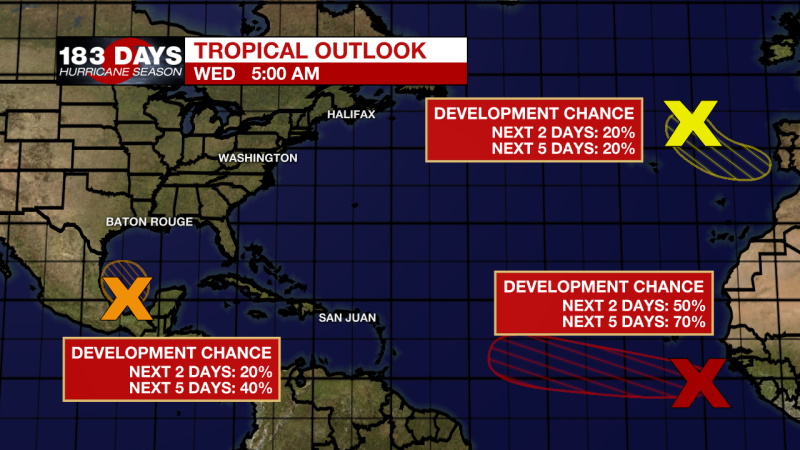 An area of low pressure over the southwestern Gulf of Mexico is producing showers and thunderstorms that are showing some signs of organization Upper-level winds are forecast to gradually become more conducive for development, and a tropical depression could form late this week while the low meanders over the southern Gulf of Mexico for the next several days.

Showers and thunderstorms associated with an area of low pressure located a few hundred miles south-southeast of the Cabo Verde Islands have changed little during the past several hours. Environmental conditions are conducive for development of this system, however, and a tropical depression is likely to form during the next few days while the system moves generally westward at 10 to 15 mph.

A non-tropical area of low pressure is located over the far northeastern Atlantic Ocean a few hundred miles northeast of the Azores. This system could acquire some subtropical characteristics while it moves southeastward and eastward at about 10 mph during the next few days. For more information on this system, see High Seas Forecasts issued by Meteo France.