Rounds of rain begin on Wednesday

One more quiet day of weather is ahead. Rain and storms will return by midweek and last through the weekend.

Today and Tonight: With a high temperature in the upper 80s, clouds will increase on Tuesday as a warm front jogs north in the western Gulf of Mexico. That boundary will allow showers and thunderstorms to push in from the southwest Tuesday night and low temperatures will hold in the upper 60s.

Up Next: On Wednesday, a stalled frontal system will initiate an unsettled weather pattern that lasts right into the weekend. Scattered showers and thunderstorms will occur in multiple rounds and by Thursday, a few of the storms could be strong and heavy. Damaging wind gusts, hail and torrential rain are possible. Though timing is a lower confidence aspect of the forecast, Friday into Saturday looks like a particularly stormy period. A general 4-6 inches of rain is expected over the stretch, but as we commonly see, some locally higher totals could result in areas of street and poor drainage flooding. Spreading the rain over multiple days though should help ease any larger flooding problems. By virtue of clouds and precipitation, low temperatures should remain above average while high temperatures are near or just below average.

The Mississippi River: At Baton Rouge, major flood stage continues with a level of 41.7’ as of Tuesday morning. Peaking at 44.1’ on March 19, the river set its 7th highest recorded crest at Baton Rouge. In addition, at 122 days this marks the second longest period above flood stage. Heavy rain that fell north of the area will keep the river high through Mid-May. At about 42.5’, it does not appear that this second crest will be quite as high as the first earlier this year. The high water is primarily an issue for river traffic and river islands, although some inundation will continue unprotected low-lying areas. The city of Baton Rouge and the main LSU campus are protected by levees up to 47 feet. Some soggy areas and seepage may be noted due to the long duration of high water placing pressure on the levees. As some of the Mississippi River diverts into the Atchafalaya River, gauges at Krotz Springs and Morgan City will stay high as well. This creates backwater flooding in parts of Assumption Parish in areas such as Stephensville and around Lake Palourde. Like Big Muddy, this is expected to be a prolonged event but is not uncommon for the time of year.

By Tuesday with more persistent and deeper onshore flow from the Gulf of Mexico, expect dew point temperatures and therefore humidity to increase. With an upper level ridge departing east, some clouds will build in from the west as well. An unsettled stretch of weather will be underway by Wednesday morning. A warm front will be sliding in from the southwest as a broad upper level trough develops over the western two-thirds of the country. An associated weak cold front will move in from the northwest by Thursday and Friday, stall, and become more diffuse. The position of this trough will put the local area under deep, southwest wind flow, which is a setup that favors rounds of rain and thunderstorms—especially with a forcing mechanism present in the form of a stalled front. 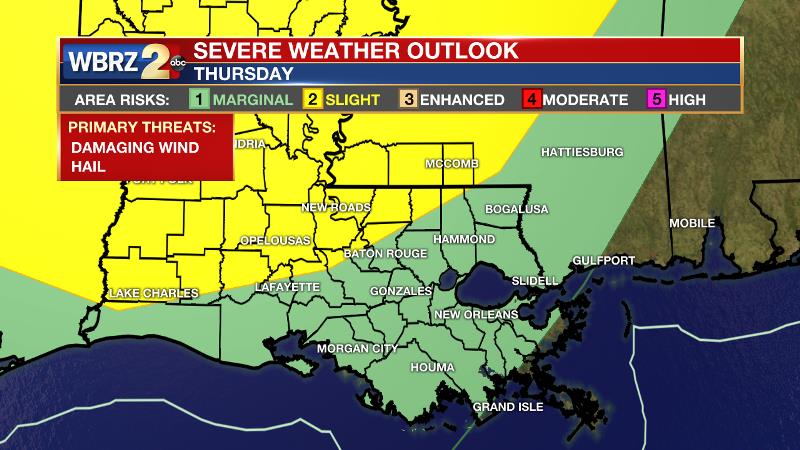 High instability and drier mid-level air could even lead to some damaging wind gusts and hail on Thursday. The Storm Prediction Center has placed the northwestern half of the forecast area in a 2 out of 5 “slight risk” for severe weather to account for this possibility. This pattern will likely continue right into the upcoming weekend. There are two difficulties in this type pattern though. First will be timing out when the most active periods will occur and second will be placing the heaviest amounts of rain. As subtle upper level disturbances ride over the area, we can expect more action so this means daytime heating will not be the main factor in setting off precipitation. 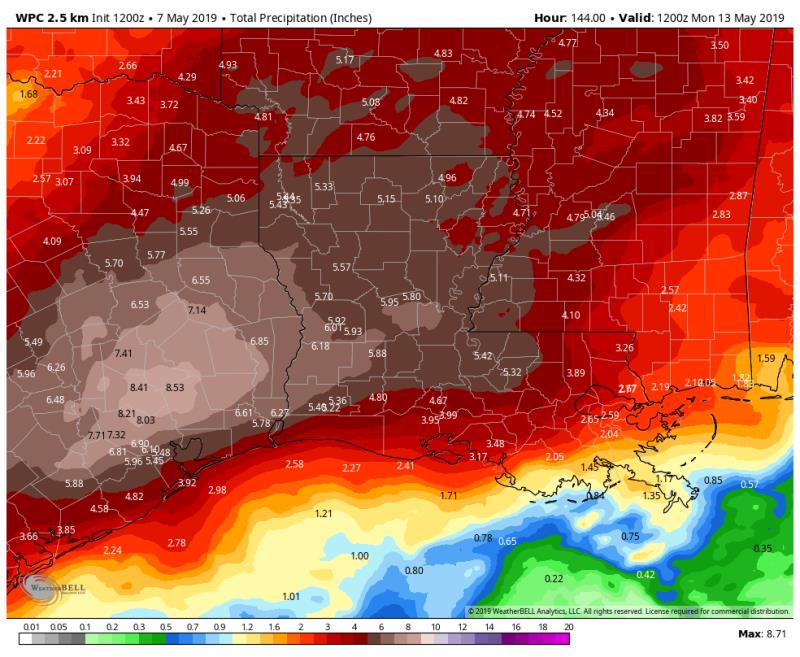 We are expecting a general 4-6 inches of rain over the area but along the Gulf Coast, an event like this often leads to isolated amounts that are quite a bit higher. The good news is that those amounts should be spread across 5 days, which should make runoff manageable, but it would not be surprising to see some areas of street and poor drainage flooding.