October begins warm, but a cold front is in sight

The city of Baton Rouge has capped off its hottest September on record since 1930. Warmth and generally dry conditions will continue through at least mid-week. Alas, the first sign of a noticeable temperature drop is in view for early next week.

Today and Tonight: More sunshine is ahead for your Tuesday. There is an outside chance at some cloud cover and stray showers near the coast. It will likely be the warmest afternoon of the week with highs reaching the middle 90s. Overnight will be mostly clear with lows in the low 70s.

Up Next: A large ridge of high pressure has been camped out over the Southeastern U.S. since last week and that will continue through the middle of this week. High and low temperatures will stay in the 90s and 70s respectively through the week. An isolated shower or two could occur near the coast through Wednesday. The ridge will finally begin to weaken by the latter part of the week, allowing a weak trough to initiate a weather pattern that is conducive for a cold front to push farther southward. By Thursday, a weak and fast moving disturbance will move from east to west across the Gulf bringing a slightly better chance of rain Thursday, and especially Friday, as a weak front moves into the region. This boundary is not a game changer though. It will only lead to a slight reduction in humidity for the weekend. More interesting is that this front could set the stage for a stronger front with cooler air to mosey on in by the early part of next week. 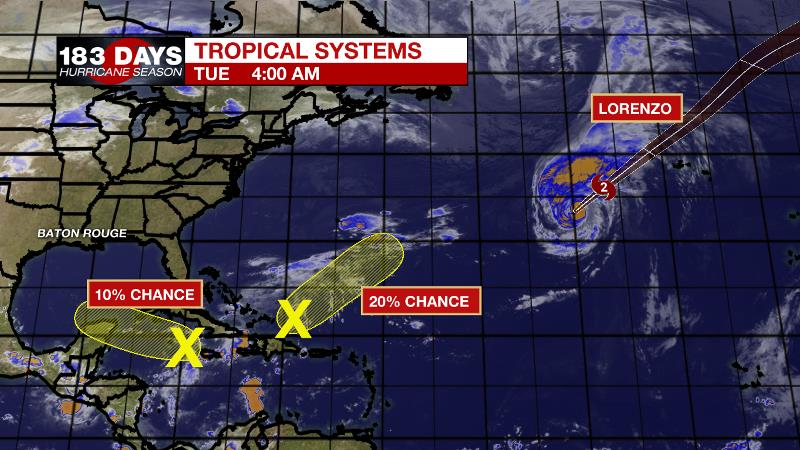 The Tropics: After becoming the strongest storm ever recorded so far north and east in the Atlantic Ocean, Hurricane Lorenzo will move dangerously close to the Azores. Hurricane warnings have been issued for the islands. Lorenzo remains large and strong with maximum winds of 100mph. By the end of the week, the storm will lose tropical characteristics as it approaches the British Isles. High swells, rain and wind are likely there as a result.  Two other weak disturbances have been identified by the National Hurricane Center and both have small, 10 to 20 percent development chances. The first wave is east of the Bahamas and will scoot south of Bermuda. The second wave is west of Jamaica and will cross the southern Gulf of Mexico.

A large ridge of high pressure remains anchored across the Mid Mississippi River Valley. Vertical descent continues to bring warmer and drier than normal conditions to the region. A weak tropical wave moving across the Caribbean Sea will race into the Gulf by the middle of the week. Conditions do not favor any kind of tropical development, but this system could fling enough moisture into the region for a couple of showers Wednesday through Friday, but still, not much. As the large ridge finally starts to break down, moisture associated with the Gulf disturbance could be drawn northward by a weak front approaching from the north. These two factors should combine for the best chance at showers and thunderstorms in more than a week. This front will then push through the area and take dew points down by a few degrees on Saturday, but afternoon temperatures will remain warm. While not too exciting, this front will be important in setting the stage for another, more significant front on Sunday or Monday. Whether or not any rain occurs will depend on the position of a ridge of high pressure behind the boundary. If the high trails closely behind, rain chances will be low. 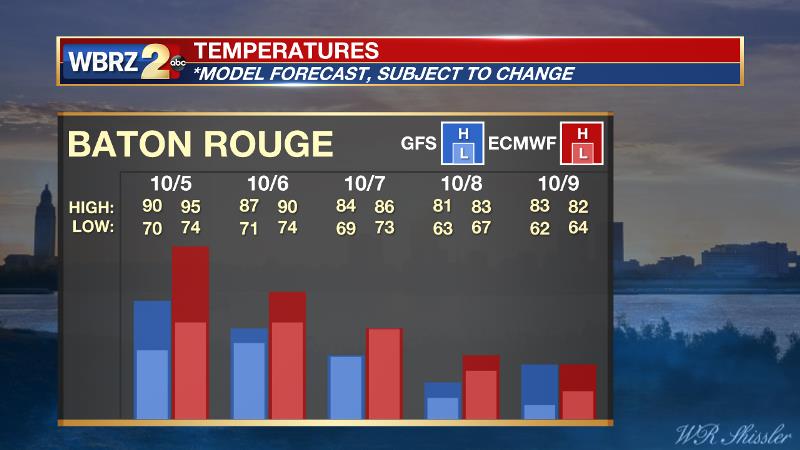 Either way, the aspect of the front of more interest to most will be temperatures. Should this front push through, we will have a chance at some cooler temperatures, perhaps a little closer to seasonal averages in the mid 80s and mid 60s by the middle of next week. Both the GFS and ECMWF model are on board with this solution and only differ in how much temperatures drop behind the front. Stay tuned!