Outdoor plans for Easter Weekend can hop along. The chances for rain will lay an egg through Monday.

Next 24 Hours: Tonight will be clear and chilly with low temperatures in the upper 30s. It would not be surprising to see numbers dip a tick or two lower than Friday morning since winds will be lighter. While patchy frost is unlikely, out of an abundance of caution, you might protect those sensitive plants for one more night. Saturday, plenty of sun will be around but some high clouds could mix in as well. As winds shift east and the atmosphere moderates, high temperatures will take a run at 70 degrees.

Up Next: For your Easter, expect more of the same. Skies will be mostly sunny and highs will be seasonably mild in the mid 70s. By Monday, winds will take on a southerly component and aid a warming trend that sends temperatures back to average with lows in the mid 50s and highs in the upper 70s. By Tuesday, enough low level moisture will return to the area to kick up isolated showers Tuesday and possibly Wednesday. A weak cold front could move into the region by the end of next week with slightly better chances for rain. CLICK HERE for your full 7-Day Forecast.

The Explanation: Northwest winds aloft will maintain a very dry air mass and promote large ranges in high and low temperatures through the weekend. However, an upper level ridge growing across the Mid-South will result in moderating temperatures through the weekend. A fast moving disturbance in the upper level flow will move across the area on Saturday but with little moisture in the atmosphere, just an uptick in cloud cover may be noticed. The broad upper level ridge will hold over the South Central U.S. early next week resulting in sinking air and therefore mainly clear skies and warming temperatures. At the surface, an area of high pressure in the Southeast U.S. will promote a return to southeast winds and gradually increasing moisture. As a result, some limited instability during peak heating hours Tuesday afternoon could lead to a few showers. Rain coverage will be limited to about 30 percent of the area. 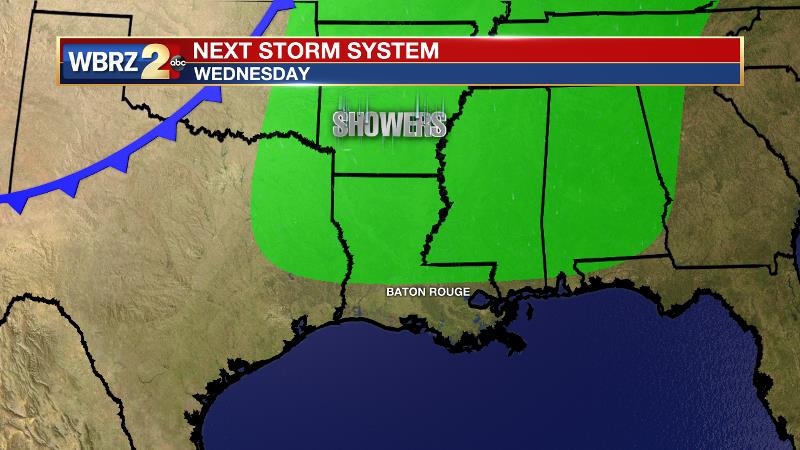 By the end of next week, a frontal system will approach from the north, but as is common as we move deeper into spring, this one will have trouble making a full pass. However, the added lift generated by the front and moist, onshore flow will aid in mainly daytime showers and thunderstorms to end the week.