Tonight and Tomorrow: Mostly cloudy skies tonight, as showers slowly taper off and push toward the northeast. There will still be a potential for overnight rainfall, but should stay rather light. Temperatures will be slow to cool near a low of 74° with calming winds out of the south. A wet Sunday in store, as scattered showers and storms will occur through the day associated with rain bands pushing onshore. Expecting around 0.5” across our area, with localized spots picking up 1-3”. Periods of heavy downpours are possible, so localized flooding will also be a concern – especially through the afternoon hours. Temperatures will have a tough time warming, due to the clouds and rainfall. Highs will only peak near 84° with light winds out of the south. 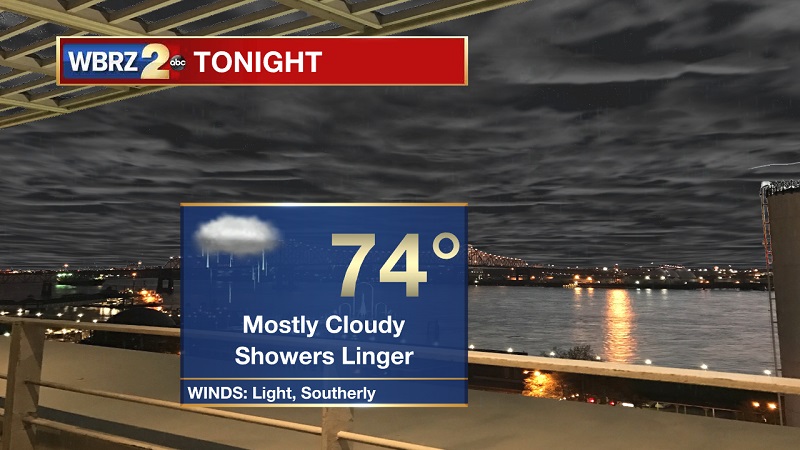 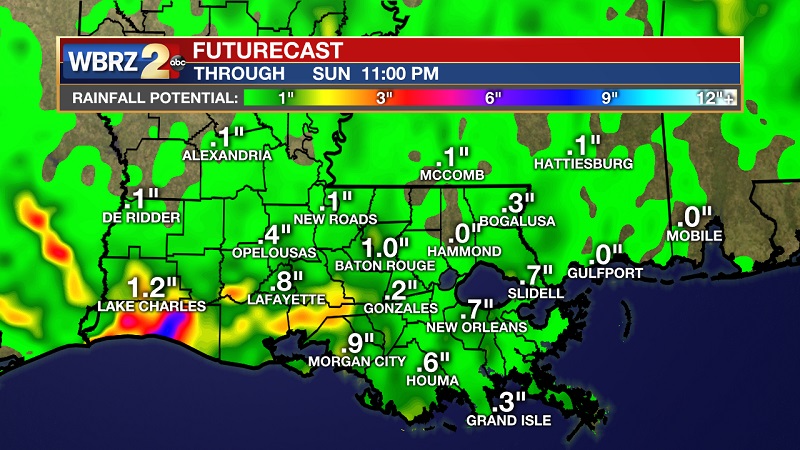 Up Next:  Scattered showers and storms continue through Monday, before being more confined to afternoon hours Tuesday and Wednesday. We begin to slowly dry out through the remainder of the workweek as temperatures rebound back into the low 90s.

The Tropics: The fourth tropical storm of the 2019 Atlantic Hurricane Season has been named earlier today, as Dorian strengthens from a depression to a storm. It is currently located 725 miles east-southeast of Barbados moving west at 12 mph with 40 mph sustained winds. A turn toward the west-northwest is forecast on Sunday, and that motion is expected to continue through Tuesday. On the forecast track, the tropical cyclone is expected to be near the central Lesser Antilles on Tuesday. Gradual strengthening is forecast during the next few days, and Dorian could be near hurricane strength when it approaches the central Lesser Antilles on Tuesday. 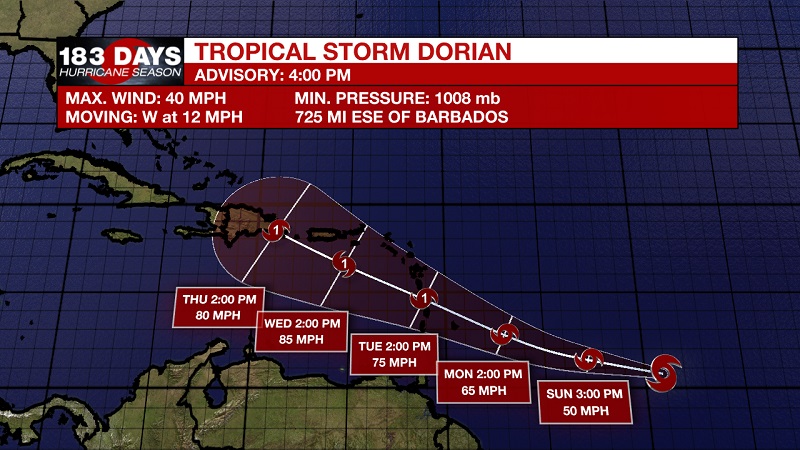 We are also monitoring two tropical waves in the Gulf and the Atlantic. The first is a broad and elongated area of low pressure that is extending from the southern Florida peninsula northeastward into the Atlantic and is producing a large area of disorganized showers and thunderstorms, primarily over the Atlantic north of the Bahamas and east of the central Florida peninsula. Environmental conditions appear conducive for gradual development during the next few days, and a tropical or subtropical depression is likely to form early next week while the system moves northeastward over the Atlantic, offshore of the southeastern United States coast. An Air Force Reserve Hurricane Hunter aircraft is scheduled to investigate the system on Sunday, if necessary. The National Hurricane Center is forecasting a 70% chance of tropical formation in the next 2 days, increasing to a 90% chance in the next 5 days. 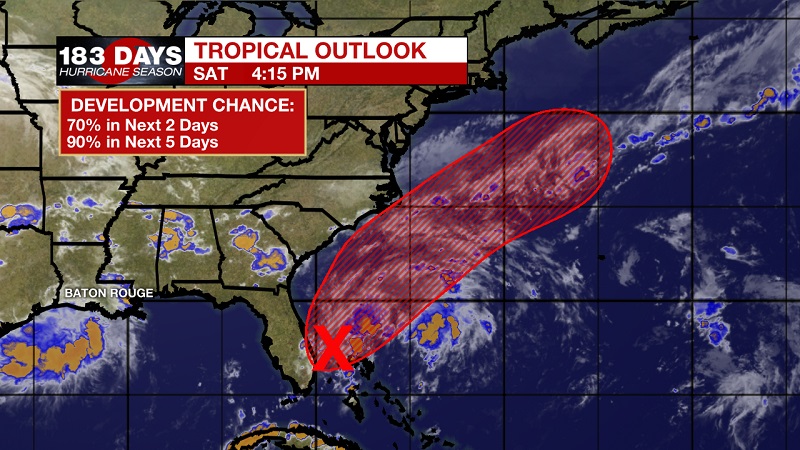 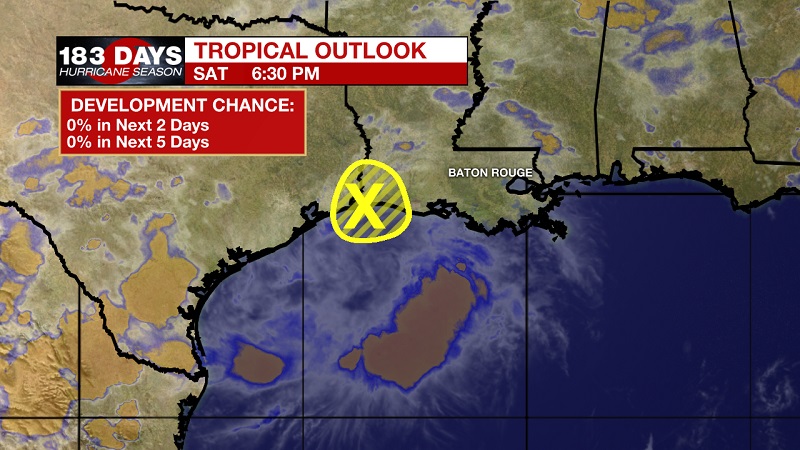 The second is a trough of low pressure over the far northwestern Gulf of Mexico, which has moved inland over the Upper Texas coast and western Louisiana. Although further development of this system is not expected, it will likely bring locally heavy rains to portions of Louisiana and eastern Texas during the next two days. The National Hurricane Center is forecasting a 0% chance of tropical formation in the next 2 days and in the next 5 days.

A low pressure has developed along the Texas/Louisiana border over the last 24 hours, which has kept moisture continuously pushing onshore. This has resulted in times of heavy rain and gusty winds. This will stay in the forecast through the rest of the weekend as the low slowly pushing north through the western part of our state. Flash flooding will be our main concern during the next 48 hours as this system will pull rain bands onshore that will be oriented somewhat north-to-south, which could set up a training situation in areas. This could result in regions experiencing heavy rainfall for over an hour, leading to areas quickly flooding – especially if they are prone to flood or are in low-lying areas. We are in the slight category of the excessive rainfall outlook from the Storm Prediction Center for Sunday, and the marginal category on Monday. This means that we could see 1-2” of rain, with isolated spots picking up 2-4” through Monday. The low and Bermuda high will keep afternoon showers and storms in the forecast Tuesday and Wednesday. Rain becomes more isolated starting Thursday, as drier conditions commence as we proceed through the weekend. High temperatures will be back into the low 90s starting Tuesday, but should stay below average through the rest of the workweek.