NASA’s Opportunity Rover has really made the grade, by extending its intended lifespan on Mars from 90 days to over 5,300. Unfortunately, it may have met its demise as scientists have yet to hear back from the rover since June 2018. That was when a huge planet-wide sandstorm blotted out the sun for several months, inhibiting the sunshine breaking through to the martian surface and draining onboard batteries. Since the last communication with the rover, back on June 10, 2018, NASA has sent over 600 commands in order to revive it. Scientists were hoping that during Mars’ windy season, which is usually from November to January, the wind would be able to clear Opportunity’s solar panels in order to provide enough power to finally communicate with Earth. Unfortunately, that has not been the case, and the martian winter is approaching, which ended the life of Opportunity’s twin rover, Spirit, back in 2011. 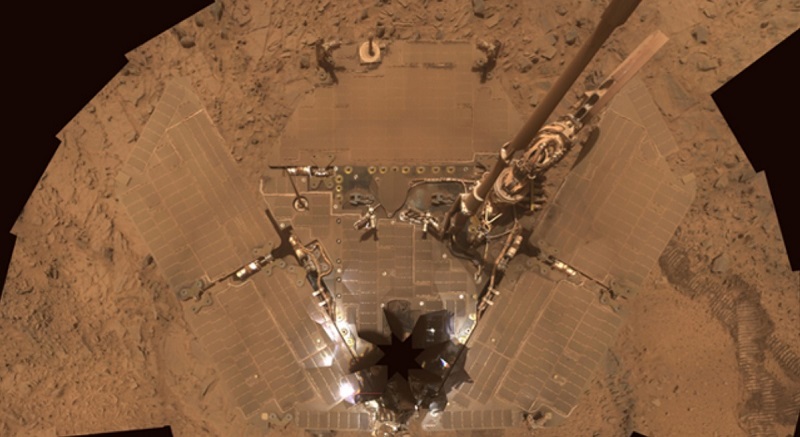 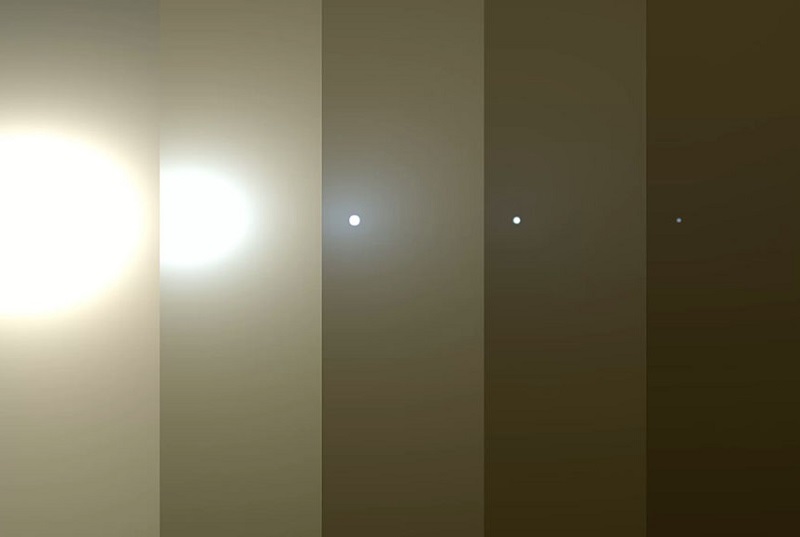 Image:This series of images shows simulated views of a darkening Mars sky blotting out the Sun from the point of view of NASA's Opportunity rover, with the right side simulating Opportunity's view during the onslaught of the global dust storm in June of 2018.

“The end of the windy season could spell the end of the rover,” says Steven Squyres, the mission’s principal investigator at Cornell University. “But if this is the end, I can’t image a better way for it to happen… 15 years into a 90-day mission and taken out by one of the worst martian dust storms in many years.” An incredible feat by NASA scientists having kept Opportunity alive for 15 years, and breaking the record set back in 1973 for longest driving distance on Mars or the moon at 45.16 km. Opportunity has also brought us incredible understanding on the intricacies of the Mars surface, soil composition, water history, and availability through the past years. 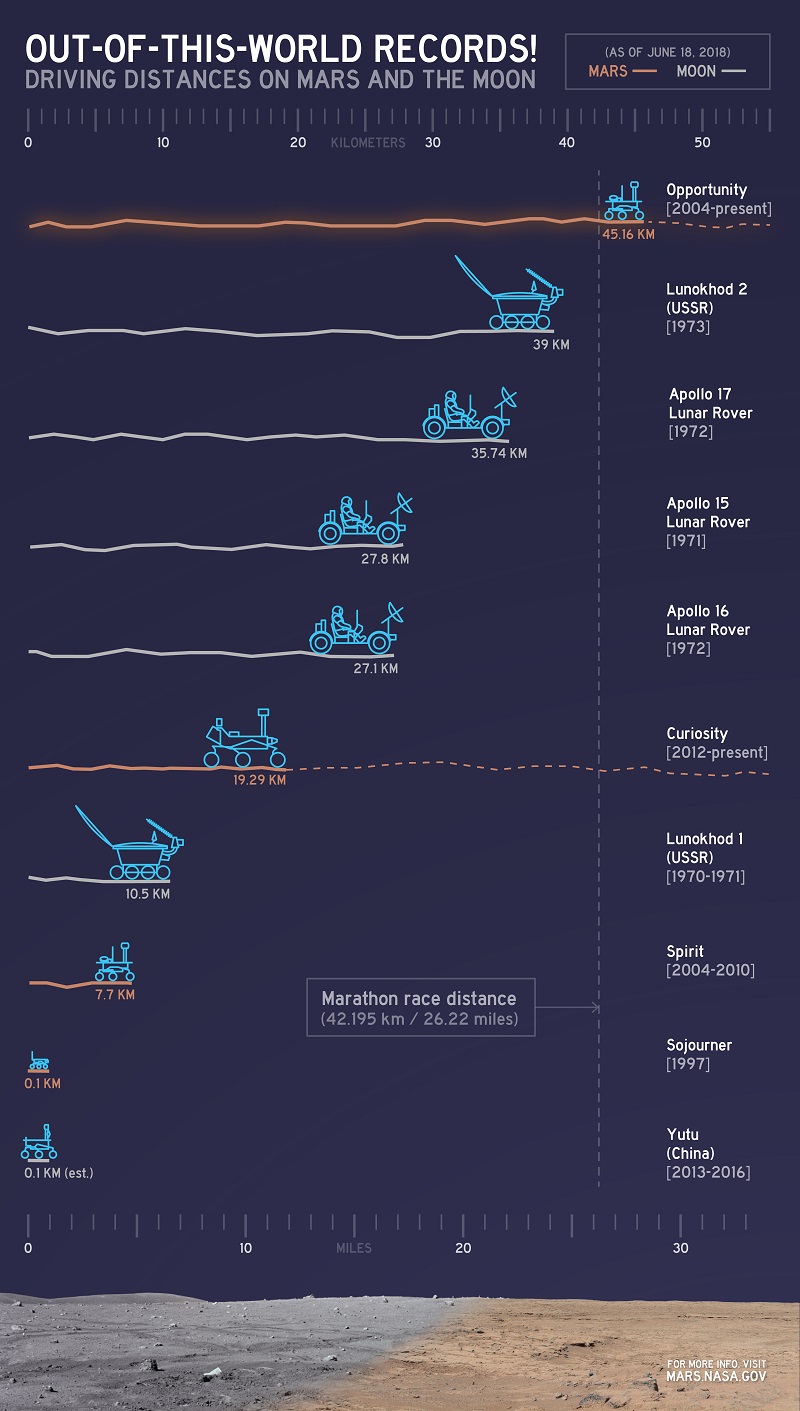 Image:This chart illustrates comparisons among the distances driven by various wheeled vehicles on the surface of Earth's moon and Mars. Two of the vehicles shown - NASA Mars rovers Opportunity and Curiosity - are still active, and their drive distances shown are as of June 18, 2018. Opportunity hold the off-Earth roving distance record after accuring 25 miles (40 kilometers) of driving on July 27, 2014. Currently, it has journeyed just over 28 miles (45.16 kilometers) to date.

“We have and will continue to use multiple techniques in our attempts to contact the rover,”said John Callas, project manager for Opportunity at NASA’s Jet Propulsion Laboratory. “These new command strategies are in addition to the ‘sweep and beep’ commands we have been transmitting up to the rover since September.” The ‘sweep and beep’ commands that are sent to the rover, ask that the rover respond back with a beep. This is more of an instant acknowledgement of the rover returning to a more normal operating status instead of JPL just listening for Opportunity. The new transition strategies are expected to go on for several weeks. They address three possible scenarios: that the rover’s primary X-band radio – which Opportunity uses to communicate with Earth – has failed; that both its primary and secondary X-band radios have failed; or that the rover’s internal clock, which provides a timeframe for its computer brain, is offset. A series of unlikely events would need to have transpired for any one of these faults to occur. The potential remedies being beamed up to address these unlikely events include a command for the rover to switch to its backup X-band radio and commands directed to reset the clock and respond via UHF. 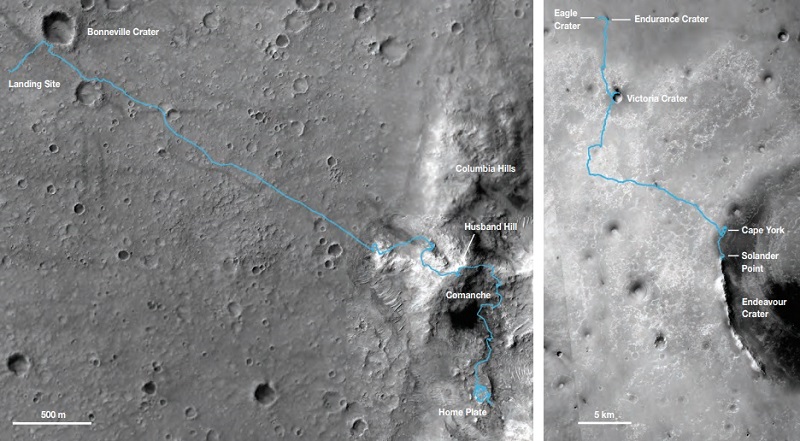 “Over the past seven months we have attempted to contact Opportunity over 600 times,” said Callas. “While we have not heard back from the rover and the probability that we ever will is decreasing each day, we plan to continue to pursue every logical solution that could put us back in touch.” The window of opportunity is closing, as the windy season has commenced and winter in the southern hemisphere is nearing. This will bring extremely low temperatures that are likely to cause irreparable harm to an unpowered rover’s batteries, internal wiring, and onboard computer systems. “After that, I don’t know what to do next, if anything,” Callas says.