A cold front will move through with a few showers into the start of the weekend. Much cooler temperatures will move in behind it and stick around for the foreseeable future.

Next 24 Hours: A cold front will move into the region tonight bringing increasing clouds. Ahead of it, south winds of 5-10mph will provide just enough low level moisture for some showers to develop with the front. Low temperatures will stop in the low 60s. On Saturday morning, showers will quickly depart from west to east. Clouds will linger into the afternoon with more clearing possible late. Behind the front, north winds of 10-15mph will cause temperatures to remain close to 60 degrees or even fall into the 50s through the day.

Up Next: Clearing skies and the ongoing north winds will send low temperatures tumbling into the 30s on Sunday morning. Some patchy frost is possible and an isolated spot or two well north and east of Baton Rouge could hit freezing. After a clear and cool finish to the weekend, another storm system will move into the region early next week. 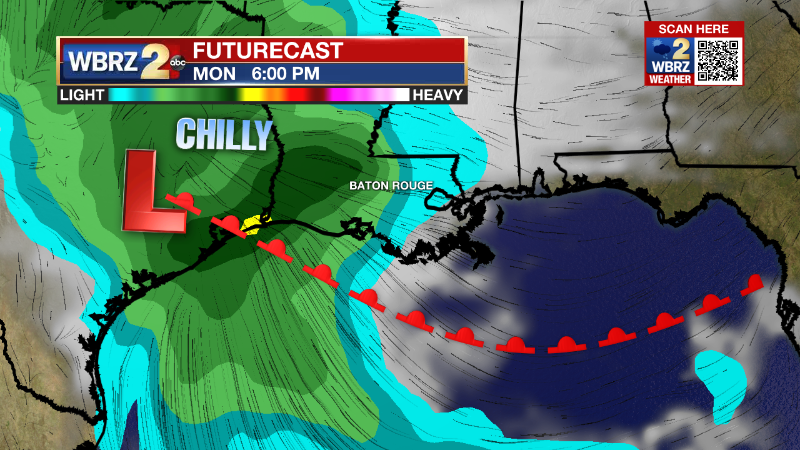 Monday will also begin in the 30s and with increasing clouds through the day, it will be hard for thermometers to climb beyond the upper 50s. A period of rain is expected Monday evening through Tuesday morning. Temperatures will only fall off a few degrees into the 50s as the rain is falling. A half inch or even inch of rain is possible before ending. The remainder of the week will stay cool with highs near 60 degrees and lows near 40 degrees. CLICK HERE for your detailed 7-Day Forecast.

The Tropics: Post-Tropical Cyclone Nicole will track to the northeast through Saturday with a couple of tornadoes possible over southeast Virginia and Delmarva early Friday evening. Locally heavy rain and gusty winds will spread from the mid-Atlantic and Ohio Valley to New England overnight.

The Explanation: A strong upper level trough of low pressure with move into the Great Lakes Region overnight pulling a surface cold front eastward and through the local area. Scattered to numerous showers will possible in advance of the front, but there will only be a brief window where there might be enough instability to produce a rumble of thunder or two. Rainfall amounts will be rather light. Expect morning temperatures in the 60s to be steady or even falling temperatures behind the front for most of Saturday. As the front and center of the upper level trough continue east, it is possible that areas west of I-55 areas could see clouds departing late in the day. Temperatures Sunday morning could approach freezing across the northern half of the viewing area. Frost in those areas, especially those sheltered from the wind, is certainly possible, and the National Weather Service will assess the possibility of freeze alerts. A surface high pressure system will slide east across the Mississippi River Valley through Sunday and Monday making way for the next storm system. A weaker surface low pressure system will spin up on the tail end of the cold front in the baroclinic region along the south Texas Coast on Monday morning. That low will track northeastward Monday evening but likely remain south of the I-10 corridor leaving the best instability and parameters for severe weather offshore. Atmospheric moisture will climbs well above average before this system arrives though and so it will likely deliver more substantial rain to the area. Fortunately, it will be a short lived event lasting from Monday evening to Tuesday morning meaning there should not be any flooding concerns. Cool, north winds will continue to wrap into the region behind this low pressure system keeping cooler than average temperatures around for the middle and end of next week.