An unseasonably warm weekend is ahead. However, though not impossible, showers are unlikely.

A *DENSE FOG ADVISORY* will be in place for part of the area through 10am Friday.

*DENSE FOG ADVISORY* for the shaded area. Take it easy driving and check with @WBRZtraffic for updates. #WBRZwx pic.twitter.com/PEdYTUWIK6

Today and Tonight: Friday will be similar to Thursday with partly sunny skies, an isolated shower and high temperatures in the low to mid 80s. Winds will be southerly at 5-10mph. Overnight, expect partly cloudy skies and possibly some patchy morning fog with low temperatures in the upper 60s. 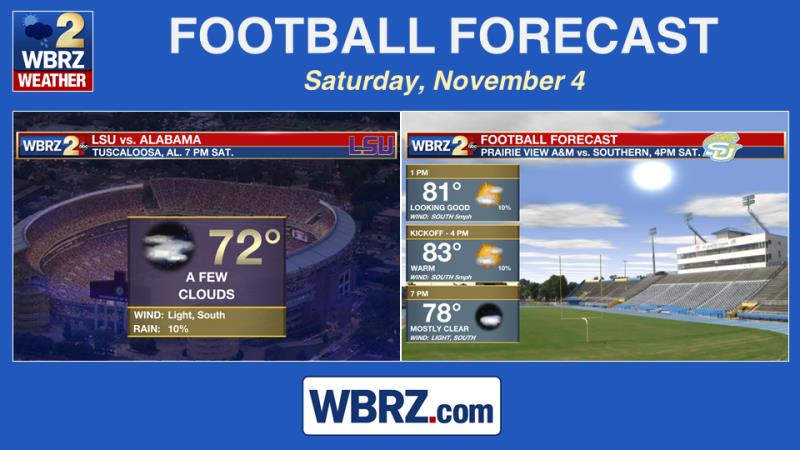 Up Next: For the weekend, rain chances can be all but eliminated. Expect partly sunny skies with highs in the low 80s and light, south winds. Nights will feature mostly clear skies early, patchy fog late and above average low temperatures in the low to mid 60s. This means the Southern Jags game at home in Baton Rouge will have no weather related issues this weekend. In Tuscaloosa, the weather is looking cooperative for the Tigers and the Tide. Game time temperatures will be in the low 70s beneath mainly clear skies. Dry, warm weather will continue into early next week. A cold front is pegged to pass on Wednesday with temperatures returning to near average for the time of year, which are highs in the mid 70s and lows in the low 50s.

As a ridge begins to build in the southern Gulf of Mexico, some lobes of energy riding around the northern periphery of this ridge may be able to trigger the development of some showers and thunderstorms across the central Gulf Coast. The most vigorous of these lobes appears to come on Friday afternoon/evening with an embedded shortwave in the jet stream to our north. The only question is if whether or not enough moisture will be available. Given the limited moisture fields shown by forecast models, expect rain coverage to remain low. Over the weekend, the ridge will build north, effectively ending precipitation development and warming high and low temperatures a good 5 to 10 degrees above average. Mild and benign conditions are anticipated early next week before the ridge begins to get suppressed south by a longwave trough moving across the northern CONUS. Forecast models hint at some sort of front accompanying this upper level transition but little to no rain is shown by forecast models. Limited lower level moisture may be to blame. Either way, forecast models do agree on a 5-10 degree drop in temperatures, returning the region to more seasonable conditions in time for next weekend.