Time to exhale after nasty storms tracked across the area on Thursday. After some straggling showers, a beautiful holiday weekend is ahead.

A plethora of weather warnings were issued on Thursday with many resulting in some minor wind damage for the WBRZ Weather forecast area. Several tornadoes occurred in southwest and central Mississippi, right in the middle of the Storm Prediction Center’s “enhanced” outlook area. The National Weather Service will visit Tangipahoa Parish more widespread wind damage may have been the result of a tornado. 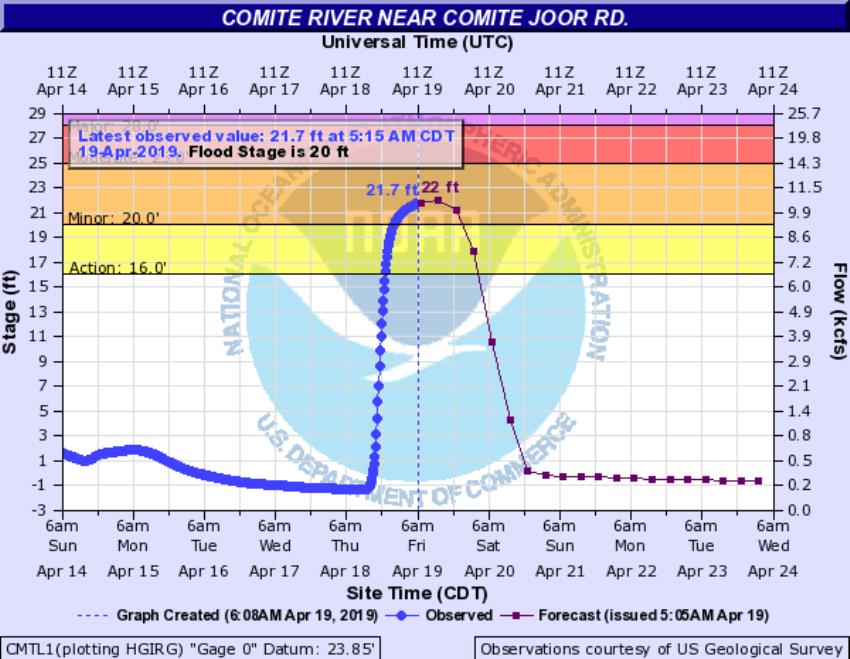 In the city of Baton Rouge, heavy rainfall resulted in street and poor drainage flooding. Due to runoff, the Comite River at Joor Road will tip 2 feet above flood stage Friday afternoon before quickly falling over the weekend.

Today and Tonight: While skies may be partly sunny to start Friday, expect to see more clouds and some showers develop during the late morning and afternoon hours as lingering upper level energy from Thursday’s cold front moves across the region. Behind that front, northwest winds of 5-10mph will hold high temperatures below average in the upper 60s. Nighttime skies will clear out with low temperatures in the upper 40s.

Up Next:  Gradually moderating temperatures are expected through Easter Weekend. Saturday will be in the 70s and Sunday will be in the 80s. Easter morning will be cool though, so grab a light jacket for the egg hunt. Quiet weather will lead us into the early part of the week. The next rain will not come until Wednesday at the earliest.

The Mississippi River: At Baton Rouge, major flood stage continues with a level of 40.3’ as of Friday morning. Peaking at 44.1’ on March 19, the river set its 7th highest recorded crest at Baton Rouge. In addition, at 104 days this is now the 3rd longest period above flood stage. River flooding and drainage north of the area will keep the river steady over the next several days. The high water is primarily an issue for river traffic and river islands, although some inundation will continue unprotected low-lying areas. The city of Baton Rouge and the main LSU campus are protected by levees up to 47 feet. Some soggy areas and seepage may be noted due to the long duration of high water placing pressure on the levees. As some of the Mississippi River diverts into the Atchafalaya River, gauges at Krotz Springs and Morgan City will stay high as well. This creates backwater flooding in parts of Assumption Parish in areas such as Stephensville and around Lake Palourde. Like Big Muddy, this is expected to be a prolonged event but is not uncommon for the time of year. Read more HERE.

A deep trough trailing the surface low and cold front that moved across the area on Thursday, will settle over the central Gulf Coast on Friday. The associated cold pool may allow for some showers to flare up in the northwesterly wind flow aloft, especially as maximum daytime heating is met. These showers should be isolated and little more than an annoyance with minor rain amounts. Cold air advection will hold high temperatures in the 60s for most and continue overnight. With clearing skies, low temperatures should be able to sneak into the 40s. As surface high pressure builds overhead for the weekend, moderating temperatures will begin on Saturday. That high will shift east on Sunday and southerly winds will guide highs back into the 80s. The high should stay parked in the Southeast through Tuesday, maintaining seasonably warm temperatures and quiet weather. Some clouds may start to build up on Tuesday and a weak upper level trough could return some showers to the area by the middle of next week.