The area is really stuck in a typically active early summer pattern. It may only change, for the wetter, by Independence Day Weekend.

Next 24 Hours: Overnight will be partly cloudy with low temperatures in the low 70s. The repetitive summertime pattern is expected on Tuesday partial sunshine warms temperatures through the 80s. Where some showers and thunderstorms develop earlier in the day, mainly near the coast, highs may only make it into the upper 80s. For locations that see precipitation holding off until afternoon, the low 90s are possible.

Up Next: Scattered showers and thunderstorms will stay in the forecast each day through the week. Highs will be about two degrees either side of 90 depending on when the cool down showers fall over your location. By the weekend, a cold front will move into north Louisiana and central Mississippi. With deep, tropical moisture pooling south of it, the boundary will be responsible for an uptick in showers and thunderstorms. Though it is a little early to call the weekend a washout, multiple rounds can be expected each day. Some downpours and therefore localized flooding could become an issue. At this time, 2 to 4 inches of rain are expected through next Monday.  CLICK HERE for your full 7-Day Forecast.

The Tropics: Tropical Storm Danny formed Monday afternoon, shortly after being determined as Tropical Depression Four in the morning. With maximum sustained winds of 45mph, Danny will move inland near Beaufort, South Carolina on Monday evening. Gusty wind and 1-3 inches of rain are expected across the South Carolina and Georgia through Tuesday. 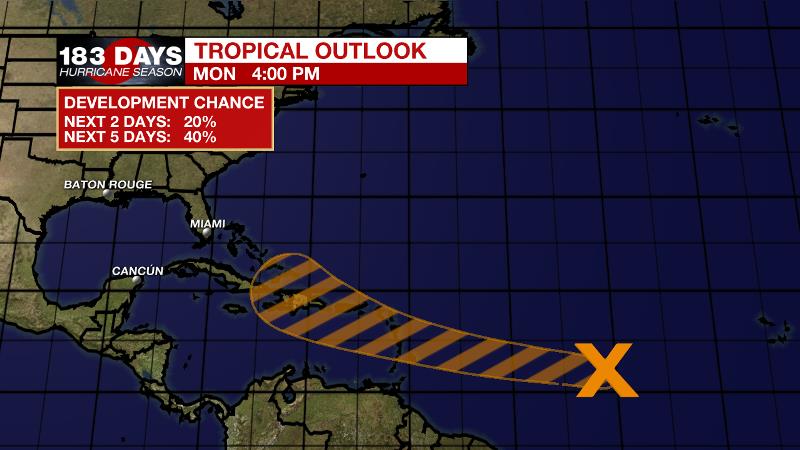 A tropical wave located over the central tropical Atlantic Ocean has been producing disorganized showers and a few thunderstorms. There is a 40 percent chance of development after the middle of the week while the system moves westward at 15 to 20 mph.

The Explanation: A strong surface high pressure system will remain just offshore of the Northeastern U.S. through the week thereby maintaining deep southeast to northwest wind flow at the surface. This result of this “fetch” will be plenty of tropical moisture and a busy sea breeze to instigate showers and thunderstorms each day as temperatures warm. An upper level low southwest of Tropical Storm Danny, near South Carolina, will zip west toward the local area on Tuesday. This mechanism could activate showers and thunderstorms near the coast that push inland by mid-morning. Otherwise, a typical daily rhythm of late morning to late afternoon showers and thunderstorms is expected each day through the week with daily coverage between 40 and 60 percent across the 13 Parish, 3 County Forecast Area. The pattern will change into he upcoming weekend, but not for the drier. A deep trough will dig into the eastern third of the country by Saturday sending a cold front into the Southeast. Unfortunately, we will see the associated showers and thunderstorms but not cooler temperatures. Given the positon of the upper level trough and the lift added to the atmosphere by it and the front, scattered to widespread showers and thunderstorms are anticipated over the Independence Day Weekend. Moisture in the atmosphere, measured by precipitable water, will be well above average and so downpours and localized flooding could become a concern. As of now, the 7-Day Rainfall Forecast calls for 2 to 4 inches, plus.