As we move into the final day of what has been a warm and humid week, some changes are in the forecast. A cold front and associated upper level system will bring some rain to the area Friday and for part of the weekend.

Next 24 Hours: The muggy feel will persist into Friday morning with low temperatures in the low 70s. Clouds will increase overnight with a few showers and thunderstorms possible by daybreak. A surface low and associated cold front will deliver scattered showers and thunderstorms on Friday. This system does not look too threatening, and while a gusty thunderstorm is possible, much of the day will be dry and some spots could miss rain entirely. As the front drifts through the area, continued clouds, times of precipitation and a wind shift will result in high temperatures in the upper 70s and low 80s.

Up Next: The upper level low associated with the front may not fully cross the region until Sunday. So, on Saturday skies will be mostly cloudy to partly sunny but any precipitation should be isolated due to the lack of a significant trigger. On Sunday, the upper level low will serve as a trigger and therefore set off scattered showers and thunderstorms. At this time, it appears areas north of I-12 may need to pay attention to the possibility of severe weather. Both days will stay close to seasonable highs in the upper 70s and low 80s. By next week, a very familiar warm season pattern will take hold as temperatures and humidity climb with isolated to scattered afternoon showers and thunderstorms. CLICK HERE for your full 7-Day Forecast. 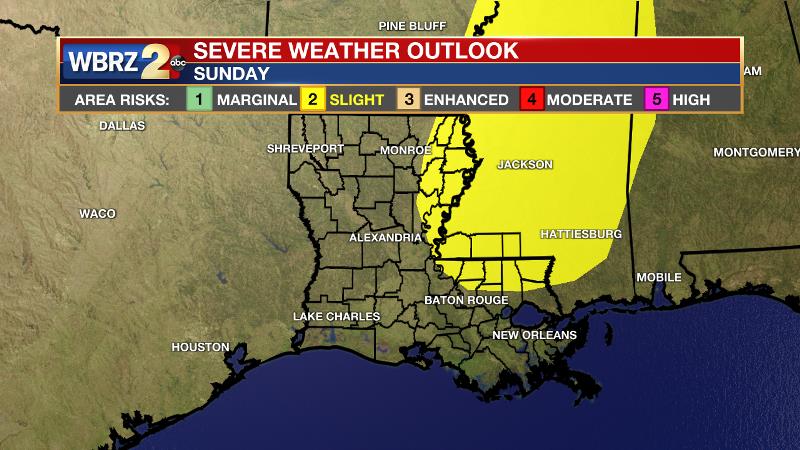 The Explanation: A frontal system over central Texas will slowly advance southeastward into the local area on Friday. This system will tap the unseasonably humid air mass to create scattered showers and thunderstorms. The atmosphere aloft will be relatively warm, precluding any significant threat for severe weather. Once the front slips into the northern Gulf, slightly cooler and drier air can be expected. Continued southwest winds aloft will force moisture over the boundary and allow mostly cloudy skies and isolated showers on Saturday afternoon and evening. A slow-moving upper level low pressure system will then move across the central Gulf Coast on Sunday leading to another breakout of scattered showers and thunderstorms. The atmosphere will be very moist for the time of year so any thunderstorms could be efficient rain producers. A quick two to four inches could occur in some neighborhoods leading to street and poor drainage flooding. Additionally, the Storm Prediction Center is advertising a 2/5 “slight risk” for severe weather given the orientation of the upper level trough and its track across the region. Beyond this system and into next week, a relatively zonal (west to east) flow aloft is expected. Additionally, onshore flow will return allowing warm, humid air to return as well. These conditions should spell partly sunny skies with air mass showers and thunderstorms popping up each afternoon to the tune of 30 to 50 percent coverage.