A cold front will cross the region on Thursday night. Showers will end by Friday as cooler temperatures take hold for the weekend. Standby, an even deeper chill could come early next week.

Today and Tonight: Beyond morning fog, expect clouds and some peeks of sun. Scattered showers are expected, but neither severe weather nor heavy rain is anticipated and the day will not be a washout. In fact, measurable rain may only fall in a few neighborhoods. Thermometers will still make it into the mid 70s ahead of the cold front. As the boundary passes tonight, with a few more showers, lows will dip into the low 50s. 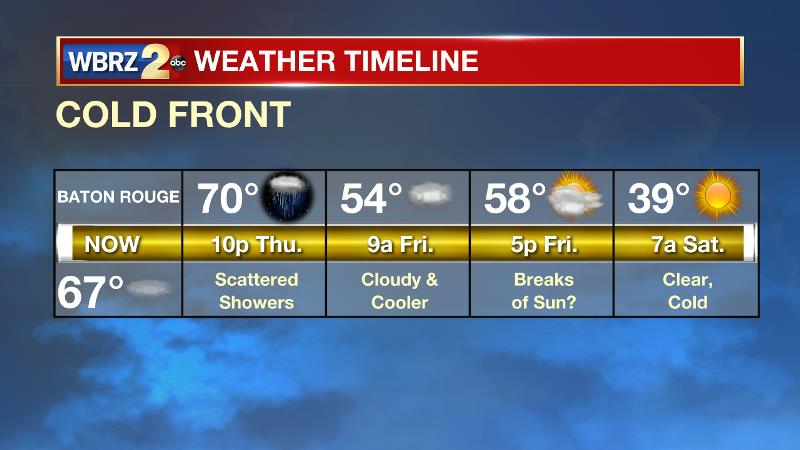 Up Next: Precipitation will end before dawn on Friday as a cold front pushes through. For Tiger fans traveling to Tuscaloosa, the weather should be quiet and cooperative. Temperatures will fall into the upper 30s on Saturday morning followed by a pair of sunny weekend afternoons in the mid to upper 60s. Cool and dry conditions are anticipated for both the LSU and Southern football games on Saturday afternoon. There are signs of even colder air entering on the region next week. A cold front will bring clouds and showers late Monday into early Tuesday followed by sharply colder temperatures. The first freeze of the season is likely on Wednesday morning. Historically, the average first freeze occurs on November 24. The earliest freeze recorded was October 28, 1957.

An upper level trough over the Great Lakes region will dig into the Mid-Atlantic on Thursday. This will send a cold front through the region. However, since instability will be low and the best upper level wind support for severe weather will remain well to the north and east, strong thunderstorms are not expected. In fact, little more than scattered showers are in store for the local area. Amounts will be light and manageable. Due to the basin of the coldest air aloft staying north and east, cold air advection at the surface may set up an inversion (temperatures cooler at the surface than aloft) with lingering mid-level moisture making it difficult for clouds to break on Friday. Lows will bottom out in the upper 30s on Saturday morning. While cooler than average temperatures will prevail, thermometers will quickly moderate through the weekend. 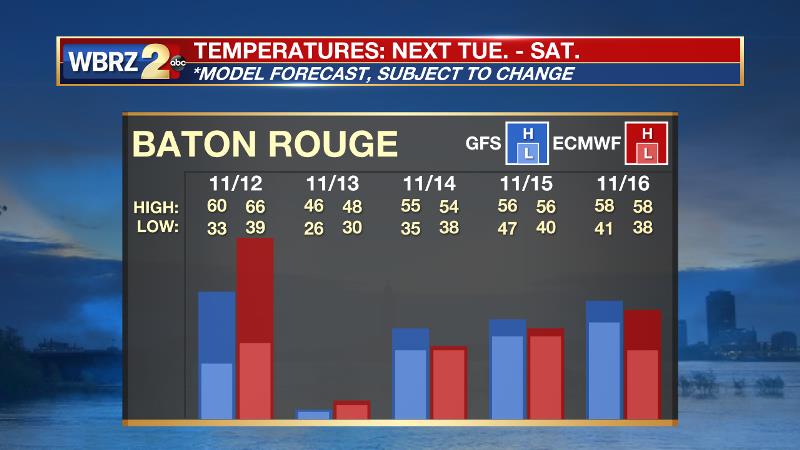 An unusually deep pool of cold air aloft will spill into the Eastern U.S. on Monday. This will send a cold front through the local area. Moisture return will be very limited ahead of that front, so rain coverage and amounts will be low once again. The bigger story with this front will indeed be temperatures. This upper level cold pool will reach the local area and translate to much colder surface temperatures with some staying power. Model guidance points to an air mass anomalous enough such that freezing temperatures are a real possibility—some ten days ahead of historical averages. Both Tuesday and Wednesday may fail to leave the 40s for high temperatures. Forecast models want to end the precipitation on Tuesday as a brief, light wintry mix but with surface temperatures in the upper 30s and the ground well above freezing, problems are unlikely if this low chance scenario materializes.