Small shifts in rain chances will dictate which afternoons are hotter through the first several days of July. Overall, no major weather impacts are anticipated through the fourth.

Today and Tonight: Drier air should remain in place as we proceed through your Monday, but it is summer so we cannot eliminate the possibility of a stray shower or thunderstorm. High temperatures will peak around 92 followed by nighttime readings in the low to mid 70s.

Up Next: The recent forecast has been tricky all because of moisture availability, which has determined the wetter or drier days. Afternoon storm chances are the highest Tuesday and Wednesday, but stay in the isolated range. They should begin to pop-up shortly after noon, and move north into the evening. A warmer atmosphere will build Thursday, allowing for conditions to be drier and hotter for July 4th and 5th. High temperatures will be making it into the mid-90s, with some spots potentially reaching into the upper-90s on Friday. Heat index values will be back into the triple digits during this timeframe. Showers and storm chances are likely to bump up over the weekend, as highs drop back down near average for early July. 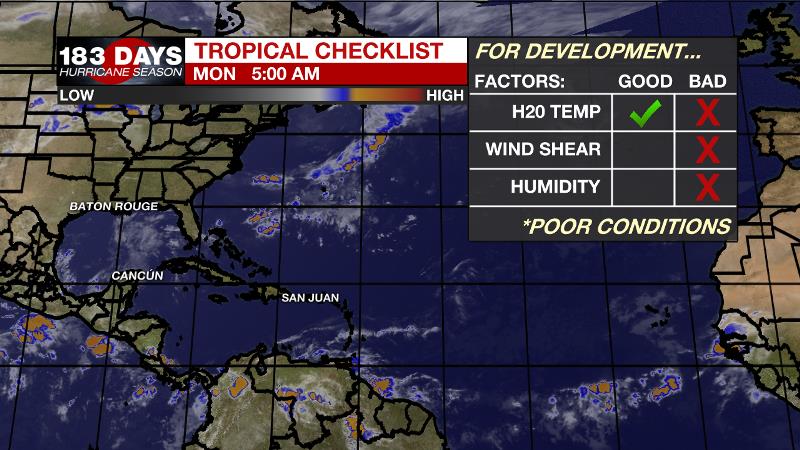 The Mississippi River: At Baton Rouge, major flood stage continues with a level of 41.9’ as of Monday morning. Peaking at 44.1’ on March 19, the river set its 7th highest recorded crest at Baton Rouge. At 177 days, this year marks the longest period above flood stage at Baton Rouge. The level will slowly fall, but is likely to stay above flood stage for several weeks to come. The high water will remain an issue for river traffic and river islands, although some inundation will continue for unprotected low-lying areas. The city of Baton Rouge and the main LSU campus are protected by levees up to 47 feet. Some soggy areas and seepage may be noted due to the long duration of high water placing pressure on the levees. As some of the Mississippi River diverts into the Atchafalaya River, gauges at Krotz Springs and Morgan City will stay high as well. This creates backwater flooding in parts of Assumption Parish in areas such as Bayou Chene, Stephensville and around Lake Palourde.

Drier air is expected to remain in the atmosphere through Monday. An isolated shower or storm is possible, but not likely. The forecast models are split on how the next few days will unfold. The main issue is moisture availability for showers and thunderstorms. Blending the solutions is the going method with isolated to scattered development forecast for Tuesday and Wednesday. This means 30 to 40 percent of the 13 Parish, 3 County forecast area is expected to receive measurable rainfall. As is common for early July, the rain chances should be limited to the afternoon hours. Confidence is higher in Thursday and Friday staying mainly dry. With an upper level ridge building over the region, compressional warming may lead to some very warm temperatures as well. Highs in the mid 90s are likely with upper 90s possible. A persistence forecast will be carried into next weekend.