After quiet weekend, active weather ahead of Thanksgiving

While a little warmer than average, overall, a nice weekend is setting up for the Baton Rouge area. The pattern will become a bit more active and progressive next week.

The Next 24 Hours: For a second straight night, low temperatures will rest in the mid 50s beneath mainly clear skies. Into Saturday, high temperatures will move into the upper 70s with mostly sunny skies. Winds will be light and easterly.

After That: By Sunday, temperatures will be a good 5-10 degrees above average and could run for 80. A weakening cold front will pass through by Monday morning but is not likely to produce any showers or significant temperature changes. A more vigorous storm system will move across the Mississippi River Tuesday night into Wednesday. At this time, it appears to lack most of the ingredients for severe weather, so at this time, we are just expecting a line of rain and thunderstorms Wednesday morning. The associated cold front will clear out in time for a mostly sunny and seasonably mild Thanksgiving. The next front could bring a slightly stronger push of cool air Friday into the weekend. CLICK HERE to view your complete 7-Day Forecast.

The Tropics: A non-tropical area of low pressure could form between the Bahamas and Bermuda. There is a 10 percent chance that this system could develop subtropical characteristics through early next week while it moves northeastward.

The Explanation: On Sunday, a weak upper level trough will pass north of the area dragging a dissipating cold front through Louisiana and Mississippi. While the atmosphere will likely be too dry for precipitation, a nominal drop in temperatures is expected into Monday. Then, an upper level ridge will allow continued dry and moderating conditions through Tuesday. Winds will quickly turn around to the south on Tuesday afternoon allowing low level moisture to build over the area. 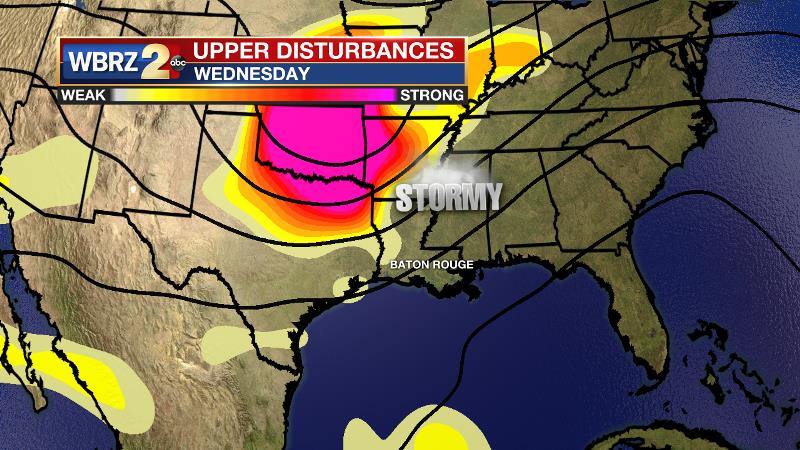 A second, stronger upper level trough will then track a little closer to the area with a better defined cold front. These features should combine to produce showers and thunderstorms, perhaps in a squall line where some brief downpours and gusty winds will be possible. If a little more instability is present, or stronger low level winds, there is still a chance for some severe storms. However, it still appears the greater chances will be just north of the local area. The storm system will press east by Thanksgiving with northerly winds transporting cooler and drier air into the region that should last through Friday.