An upper level low and cold front will approach the Baton Rouge area from the west on Tuesday. More showers and thunderstorms will be the result.

Today and Tonight: Another round of showers and thunderstorms is expected from mid-morning through afternoon. It will not be an all day rain, rather scattered to widespread showers and thunderstorms. Any storm could produce frequent lightning and downpours, leading to some street and poor drainage flooding. Highs will top out near 85 degrees before precipitation develops. Showers will diminish overnight with lows near 70.

Up Next: An area of low pressure over Texas is projected to stall and continue to feed in moisture into south Louisiana through the rest of the week. This will fire up plenty of shower and thunderstorm activity. Know that not every day will be a washout, but there will be rainy periods. 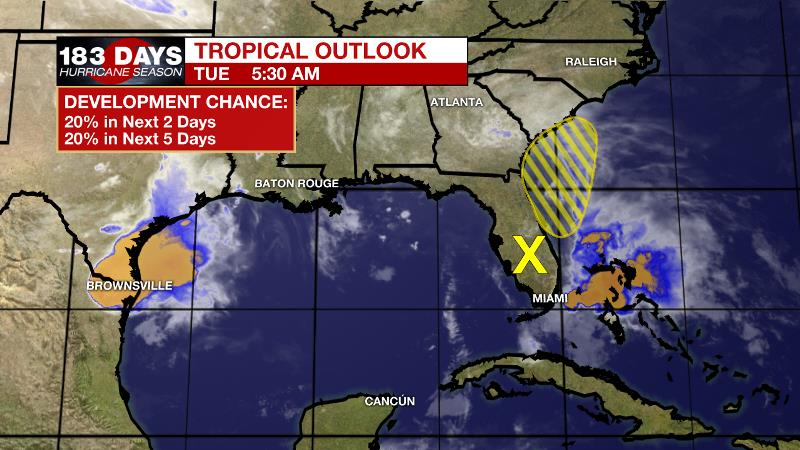 The Tropics: Widespread showers and thunderstorms extending across Florida, the Bahamas, and the adjacent Atlantic and Gulf of Mexico waters are associated with an elongated surface trough interacting with an upper-level disturbance.  Although a weak surface low could form along the surface trough just off the east coast of Florida and move northward toward Georgia and South Carolina on Tuesday and Wednesday, the low is not expected to become a tropical cyclone due to strong upper-level winds.

An upper level low swirling over central Texas will drive a surface cold front into the Lower Mississippi River Valley. The front will work with a deep feed of moisture from the Gulf of Mexico to produce scattered to widespread showers and thunderstorms. Area wide rainfall totals will not be too high for the week, but as is usual, a few pockets could see higher amounts where training storms develop. Torrential rain in these instances can create street and poor drainage flooding. Unfortunately, those microscale features cannot be foreseen until they develop. While the front will be absent, more of the same is expected on Wednesday and Thursday due to a spokes of energy rotating around the upper level low over Texas. By Friday, the upper level low will start to move through our region and into the eastern U.S. The associated instability, deep moisture and marine breeze interactions will allow scattered showers and thunderstorms to continue to develop each afternoon through Saturday. A ridge will build into the region from the west on Sunday or Monday providing a much warmer and drier atmosphere. This would lead to much warmer temperatures and lower rain coverage.
--Josh