Active pattern of showers thanks to tropical moisture

There has been little change in the strength, project path or local forecast with regard to Tropical Depression Eight. An active, wet pattern is ahead. Amounts through the weekend will range from 1 – 2 inches for areas north of I-12, to 2 – 4 inches for areas south of I-10. Tropical showers can be very efficient rainmakers, so a few isolated locations that experience multiple storm downpours could have some street and poor drainage flooding. The system will not produce any serious wind inland outside of thunderstorm gusts. However, on the shorelines, persistent southeasterly winds of 15-25mph will send tides 1-2 feet above average, so a COASTAL FLOOD ADVISORY has been issued through Friday. 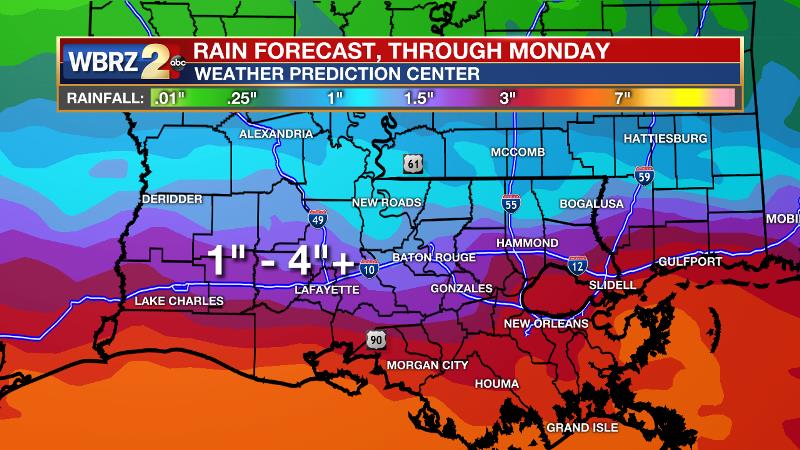 The Next 24 Hours: The night ahead should feature a reduction in showers and thunderstorms though may not work out to be completely dry with rain chances increasing as we near dawn Friday. Low temperatures will stay the course and bottom out in the mid 70s. Tomorrow, the atmosphere will be primed with a lot of moisture on the northern side of T.D. 8 leading to widespread showers and thunderstorms—especially with a little bit of daytime warming which will be limited to the upper 80s due to added clouds and rain.

The Long Term Trend: By Saturday, even though T.D. 8 (possibly Hanna at that time) will be near the central Texas Coast, it will remain close enough to continue widespread coverage of showers and thunderstorms in the local area. Even Sunday and into next week, some lingering “energy” will keep rain coverage elevated to scattered or widespread through the middle of next week. The added rain may keep high temperatures out of the 90s on several afternoons. Finally, one possible “fly in the ointment” is Tropical Storm Gonzalo. We only mention that so not to write it off, but there are no forecast models that suggest a threat to our area.

The Tropics: Here is the latest on the tropics, as of 4pm Thursday. Follow WBRZ Weather on Facebook and Twitter for the latest advisories or download the WBRZ WX App. to track storms on your mobile device.

The Explanation: Tropical Depression Eight will exert an influence on our weather through Saturday. The greatest impacts from it will be over coastal and offshore areas. These locations could experience winds of 15-20mph and tides 1-2 feet above normal. Inland, strong southeasterly winds in the low levels will create a moisture rich atmosphere. Combined with cooler air aloft, widespread rain and thunderstorms will develop. Since the central low will be well south of the area, it will take daytime warming and marine breezes to kick out showers and thunderstorms so most of the activity will occur around and after midday. The heaviest amounts will be focused from I-10 south to the coast. By Sunday, Eight/Hanna will depart to the southwest but very high moisture content will remain, while a persistent trough of low pressure aloft will maintain cooler, more unstable air. This will likely keep scattered to widespread showers and thunderstorms in the picture well into next week. Timing additional batches of rain may come on a day-to-day basis as weak upper level disturbances move over the area. Added cloud cover and precipitation in the area may hold down high temperatures. No major changes to dew point temperatures in the low to mid 70s will keep low temperatures in that range.