A+ afternoon for February, looking ahead to Alex Box opener

A beautiful, blue sky on Wednesday will be followed by increasingly gray skies and milder temperatures into the end of the week and weekend.

Today and Tonight: After a chilly beginning, Wednesday should end up quite nice with a lot of sunshine and highs in the mid 60s. Overnight, winds will turn around to the east resulting in a slightly warmer low temperature in the low 40s. A touch of fog is possible near bodies of water.

Up Next: Thursday will be transitional as southeast winds and a return of moisture to the atmosphere result in some clouds and a return to above average temperatures. A weak frontal system could create a shower on Friday night or Saturday but any activity should be sparse. Mostly cloudy skies, high temperatures in the 70s and low temperatures in the 50s are anticipated. It appears as through the chance for showers will increase with the following weather system Sunday and then again on Tuesday, however confidence remains low in this part of the forecast. 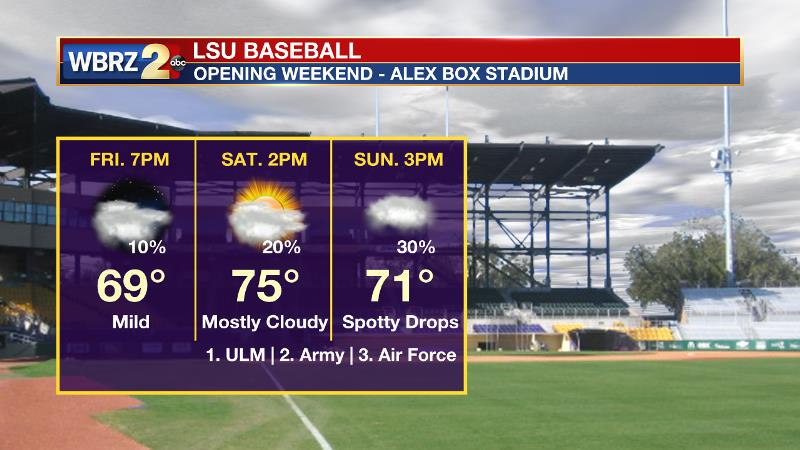 LSU Baseball: The season opener at Alex Box Stadium looks pretty good—especially for February. A weak front stalling in our region could potentially drop a shower or two and the best chance of this would come on Sunday. However, the LSU Tarp Crew should not be any busier than usual. The weekend afternoon games will likely have temperatures in the 70s, but with clouds and breeze, you may want to keep a light pullover handy, just in case.

With a surface high on top of Louisiana, a good deal of sun is anticipated for Wednesday. Some high clouds passing through the area may result in slightly warmer low temperatures overnight. 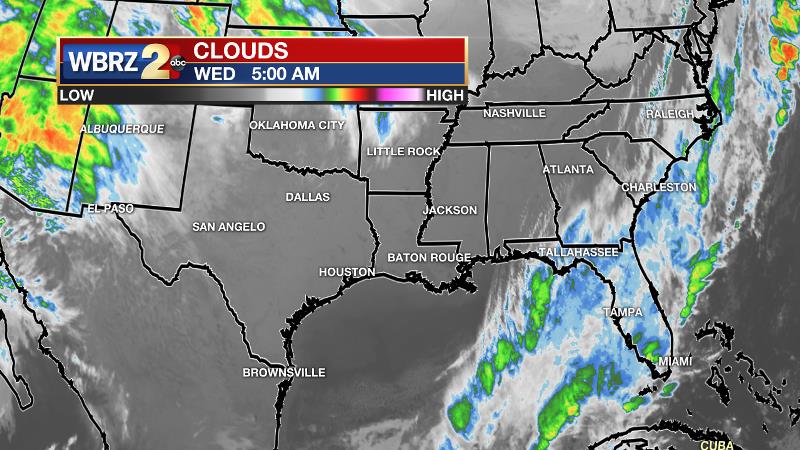 The cool, quiet spell will not last long as the high will quickly depart east on Thursday. Southeasterly winds will translate to onshore flow and a return of mild air from the Gulf of Mexico. The next upper level trough will move out of the Mountain West and into the Midwest on Thursday evening. Once again, the bulk of action with this event will stay north of the local area. However, an associated cold front may result in a passing shower or two Friday night into Saturday. The front is then expected to stall in the region. The forecast beyond this, while low impact, is complex and challenging. Overall, a large scale trough is expected to dig into the western and Central United States. Deep southwesterly flow will provide the moisture needed to maintain a lot of cloud cover. Eventually, a shortwave trough axis spinning through the longwave trough may cause the stalled front to kick south Sunday or Monday. However, forecast model guidance is in poor agreement on whether or not this system produces considerable rain. While most of the time should be dry, those with outdoor plans should be aware that at least for now, a few passing showers seem plausible—especially Sunday. If the front does clear the area on Monday, there may be a short break from any rain chances. By Tuesday, that front is expected to retreat north and stall over the coast for a few days. With continued southwest flow aloft, this could lead to a period of elevated rain chances during the middle of next week.