We are transitioning into a mainly rain-free and hot weather pattern. Expect our first run of days in the 90s this warm season. This will be due to a broad, upper level ridge developing over the southeastern U.S., which can be seen clearly on forecast models. On Monday afternoon , a very familiar warm season scenario played out with pop-up showers and thunderstorms. In line with the forecast, 30 percent of the 13 Parish, 3 County forecast area received rain. The storms were not severe, but did bring lots of lightning and downpours leading to a quick inch or so of rain. 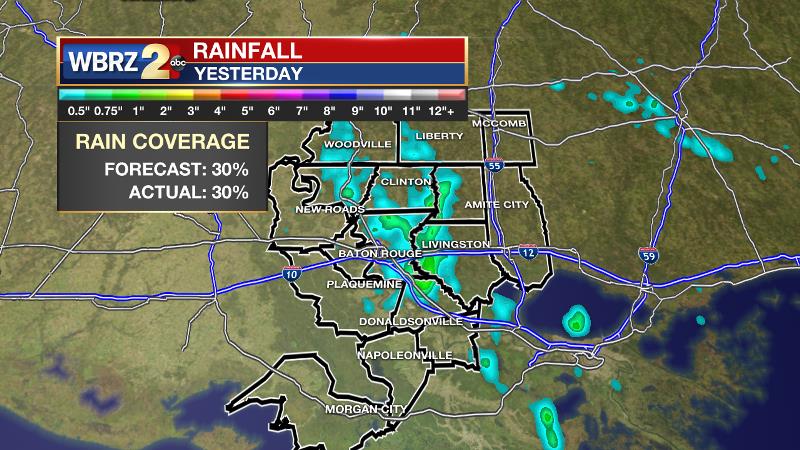 Today and Tonight: While the chances for rain are not zero, Tuesday should only bring a very isolated shower or two. Look for a partly sunny sky with high temperatures pushing 90. The overnight will be mostly clear and muggy with low temperatures near 73. 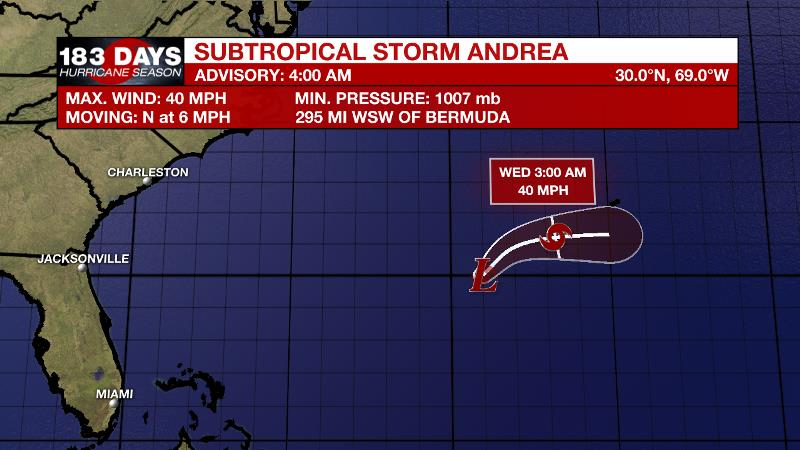 The Tropics: On Monday, Hurricane Hunters found Subtropical Storm Andrea in the west-central Atlantic. The system has a defined center but is interacting with an upper level low, and precipitation is very detached from the middle of the storm, hence the "subtropical" classification. Andrea will drift northeast toward Bermuda before merging with a frontal system. It is not a threat to the U.S. 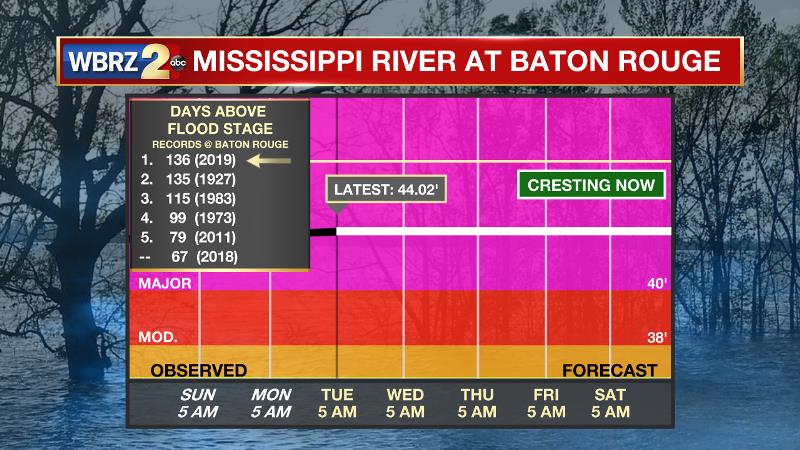 The Mississippi River: At Baton Rouge, major flood stage continues with a level of 44.02’ as of Tuesday morning. Peaking at 44.1’ on March 19, the river set its 7th highest recorded crest at Baton Rouge. As of Tuesday, at 136, this year now marks the longest period above flood stage at Baton Rouge. Projected to crest at about 44’ this weekend, the second crest could challenge the first earlier this year. Still, the high water is primarily an issue for river traffic and river islands, although some inundation will continue unprotected low-lying areas. The city of Baton Rouge and the main LSU campus are protected by levees up to 47 feet. Some soggy areas and seepage may be noted due to the long duration of high water placing pressure on the levees. As some of the Mississippi River diverts into the Atchafalaya River, gauges at Krotz Springs and Morgan City will stay high as well. This creates backwater flooding in parts of Assumption Parish in areas such as Stephensville and around Lake Palourde. Like Big Muddy, this is expected to be a prolonged event but is not uncommon for the time of year.

Tuesday and Wednesday will be hot and humid with an outside shot at a stray shower or thunderstorms developing due to a sea breeze. A cold front will approach Louisiana before stalling on Wednesday, but may get close enough to provide isolated precipitation in the northwestern corner of the forecast area. By Thursday, a surface high pressure that extends into the upper levels as a ridge will become more dominant. The result will be sinking and diverging air at the surface, which will mean warmer than average temperatures and a lot of sunshine. Highs will easily reach the 90s with some mid 90s possible for the upcoming weekend. Humidity will be there, but not quite to summer levels with dew points in the upper 60s and low 70s producing feels-like temperatures in the upper 90s.