Warm temperatures will continue through the week. Two cold fronts are in our future. The first will not bring major changes, but the second will provide some cooler air.

Up Next: A weak trough will finally begin to break down a dominant ridge of high pressure that has been maintaining hot, dry conditions for more than a week. Meanwhile, a fast moving disturbance will move from east to west across the Gulf of Mexico bringing a slightly better chance of rain Thursday, and especially Friday, as a weak front moves into the region. 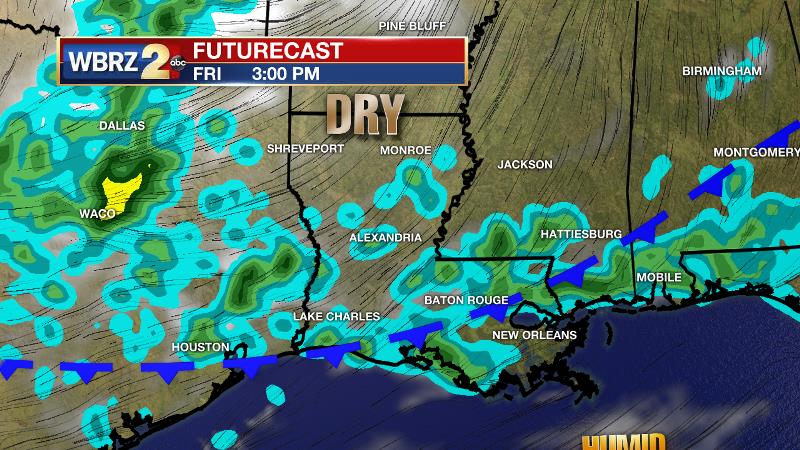 This boundary is not a game changer though. It will only lead to a slight reduction in humidity for the weekend. However, a second cold front will then have an open door to move into the region on Monday. While rain chances with this front remain questionable, some cooler air will be able to mosey on in by the early part of next week. Rather than highs and lows in the 90s and 70s, we can expect seasonable readings in the 80s and 60s. 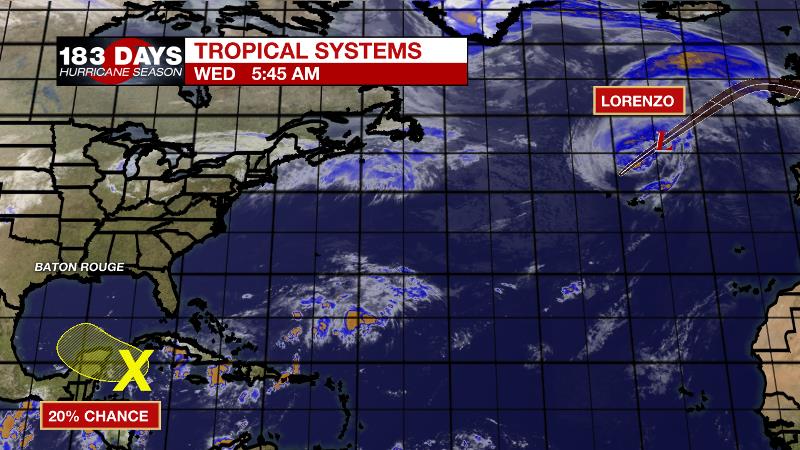 The Tropics: Hurricane Lorenzo has moved northeast of the Azores and is transitioning to an extratropical low, but still packing 90mph winds.  By the end of the week, high swells, rain and wind are likely across the British Isles. A weak disturbance in the northwestern Caribbean Sea will cross the Yucatan Peninsula and southern Gulf of Mexico later this week into the weekend. This wave is only given a 20 percent chance of development.  However, this system could throw some moisture northward to the central Gulf Coast to enhance the possibility of showers and thunderstorms on Thursday and Friday.

The upper level ridge of high pressure responsible for the lengthy stretch of hot, dry weather is beginning to break down due to a number of influences. A westbound upper level wave of low pressure will slide across the Gulf of Mexico on Thursday and Friday. Meanwhile, a weak cold front will approach from the north. The combination of these two features, plus the breakdown of the ridge will finally allow some showers and thunderstorms to develop. Still, extensive precipitation coverage is not expected either day. The first, weak cold front will cross the area on Friday but should not do much to modify temperatures, but it could drop dew points by a few degrees. A temporary break between systems is anticipated on Saturday with more sun and warmth. The next, more significant cold front will move into the region Sunday and Monday. The two major forecast models are about 24 hours apart on specific timing in that window but expect these details to be hashed out as we get closer. Either way, behind the front, temperatures will finally be sent to seasonable average by Tuesday with highs in the low to mid 80s and lows in the low to mid 60s.