A gradual warming trend in highs and lows can be expected through the week. A storm system is being monitored for impact weather in the Friday to Saturday timeframe.

Today and Tonight: Plenty of sunshine will allow afternoon temperatures to warm about 20 degrees into the mid 50s. Winds will be considerably lighter than Monday. Clear skies will continue overnight and most neighborhoods should remain above freezing with exceptions in southwest Mississippi and possibly neighboring parishes.

Up Next: A surface high will move from Louisiana to Mississippi by Thursday allowing for clear skies and gradual warming. Temperatures will break into the 60s on Wednesday, and then into the 70s on Thursday ahead of a frontal system. Winds will shift from northwest to the southwest, helping to increase dew points and instability beginning Thursday. As that system crosses the area Friday and into Saturday, parameters could be favorable for strong to severe thunderstorms, so stay in touch with the forecast.

Some moisture in the upper levels of the atmosphere, seen easily on the water vapor imagery Tuesday morning, may spread thin cirrus clouds across the area during the afternoon but sun is still expected to be the dominant feature. A surface high will build overhead through Wednesday morning allowing for another chilly night. Thanks to the high, the area will remain calm and clear on Wednesday with high temperatures moderating into the low 60s. Thursday through late week, the aforementioned surface high continues east, allowing for a steady on-shore return flow to develop. Increased low-level warm, moist air will help to develop spotty showers across the region. The general environment will continue through Friday, as the next storm system begins to develop across the Western Plains. During the late Friday into Saturday morning period, forecast model guidance shows a negatively tilted trough moving across the Mid-Mississippi River Valley, which would create a strong surface low pressure over Missouri or Arkansas. At this time, the position of the surface low well north of the local area would mean more favorable wind profiles for severe weather are likely to remain north as well. Of course, it is too early to lay out specific details and a risk for strong to severe thunderstorms still exists, especially if the low tracks farther south or activity sparks a bit sooner while the upper levels are more favorable. 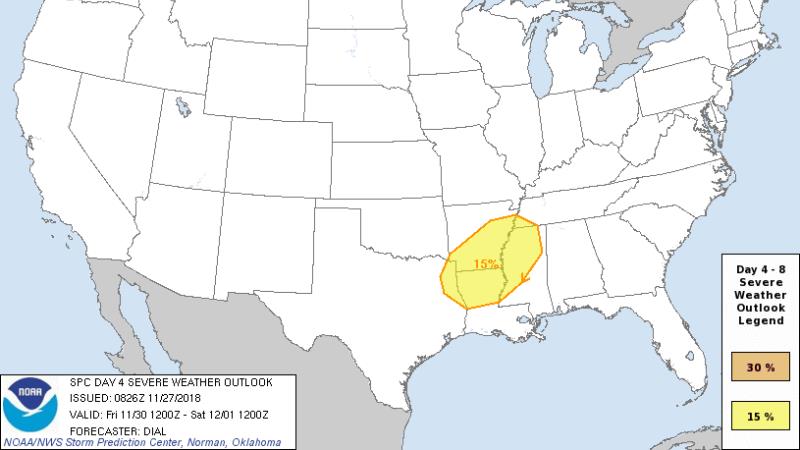 Currently, the Storm Prediction Center highlights the greatest chance for severe weather just north of the Baton Rouge area. After this system, there will be a brief break prior to another trough and surface low cutting across the Mid-South. The latest model guidance moves this system a little farther south, which could heighten the possibility of severe weather on that second one early next week.