A long awaited cold front will keep Hurricane Michael east of the local area. Sunshine, low humidity and cooler than average temperatures will arrive on Thursday.

The Tropics: With 90mph maximum sustained winds, Hurricane Michael was moving north, northwest  at 12mph as of 4am Tuesday morning.  A turn to the northeast is expected on Wednesday and Thursday with landfall occurring on the Florida Panhandle or Florida Big Bend area on Wednesday. Michael will then move northeastward across the southeastern United States Wednesday night and Thursday. 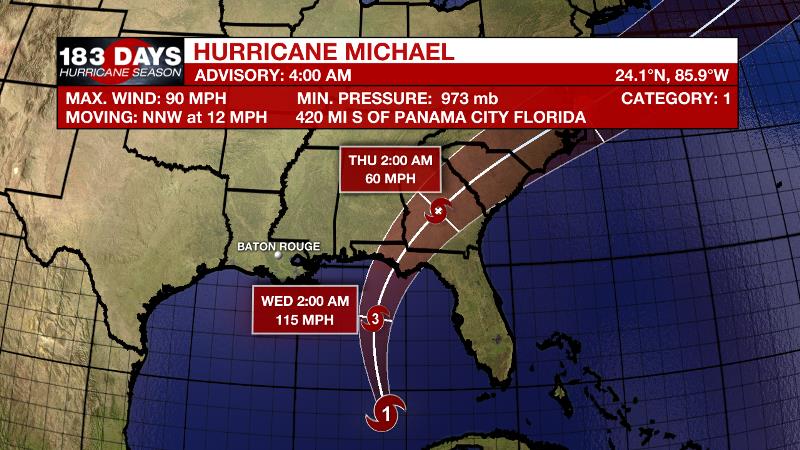 Strengthening is expected prior to landfall and Michael is forecast to be a major hurricane when it strikes. Life-threatening storm surge will be possible in the Big Bend area, with wind and inland flooding extending through the Florida Panhandle, Georgia and the Carolinas. On the western side of the system, impact to the WBRZ Weather Forecast area will be minimal. There may be a few extra showers around and minor coastal flooding of 1 to 2 feet in parts of Livingston and Tangipahoa parishes. A strong east wind will maintain higher than normal water levels along eastern facing shores of Louisiana and Mississippi through Tuesday and so a COASTAL FLOOD ADVISORY has been posted. Tropical Storm Leslie will once again become a hurricane in the east, central Atlantic Ocean and could approach Portugal as a tropical storm early next week. Tropical Depression 15 formed in the far eastern Atlantic on Tuesday morning but is not expected to be a long term threat due to unfavorable upper level conditions.

Today and Tonight: The busiest day of the week in term of showers and thunderstorms is ahead. Little sun is expected as a deep feed of moisture, some associated with Michael, provides mostly cloudy skies as well as showers and thunderstorms. This should keep high temperatures in check, staying in the mid 80s. Spotty showers may continue on a muggy night with lows in the low 70s.

Up Next: As a cold front approaches from the west on Wednesday, Hurricane Michael will be forced east of the local area. Only isolated showers will be possible locally in association with the front. Michael’s landfall is likely in the Florida Panhandle by early Thursday as that front fully sweeps southeastward into the Gulf of Mexico. 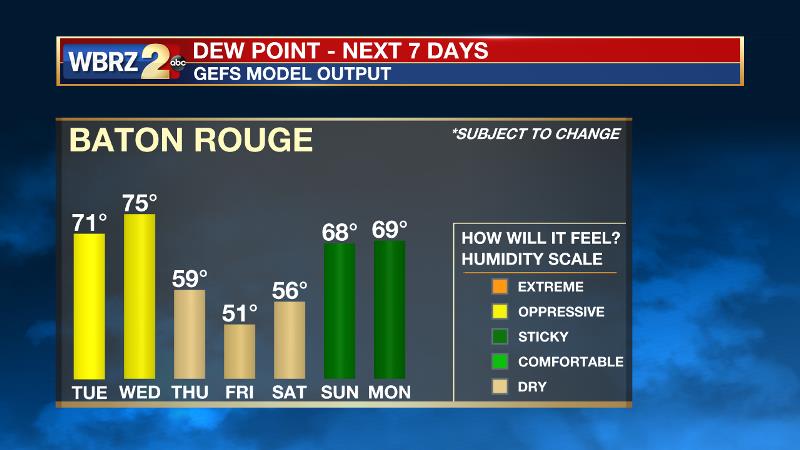 Dew point temperatures above 70 degrees, which have kept a very sticky air mass in place for weeks on end, will finally be swept away for a nice drying trend. Sunshine and cooler temperatures will prevail through Saturday. Friday will likely be the coolest day, starting below 60 degrees, barely returning to 80 degrees followed by another night in the upper 50s. Get the full 7-Day Forecast, CLICK HERE. 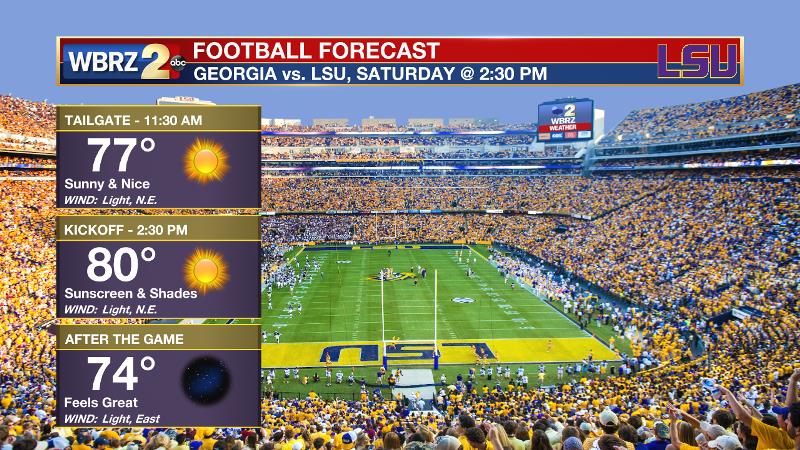 Football Forecasts: Friday night high school games will enjoy the best weather so far this season. Grab a light jacket as temperatures will fall into the 60s by the end of the games. LSU tailgaters and game goers will also enjoy the most pleasant conditions of the season as #2 Georgia comes to Baton Rouge. Take a light jacket for the morning and sunscreen for the afternoon. Southern fans hitting the road will also have similar, nice conditions in Prairie View, Texas.

The amplified upper air pattern over the U.S. will continue through Wednesday with a strong upper ridge centered over the western Atlantic and Southeast U.S. and a deep trough over the Rockies. Southerly flow between these features will steer Hurricane Michael northward from the northwest Caribbean Sea into the eastern Gulf of Mexico. The current forecast from the National Hurricane Center strengthens Michael to a category 2 storm over the eastern Gulf of Mexico before making landfall over the Florida panhandle Wednesday. With this track, most of the impacts from Michael will remain east of the forecast area. However, higher than normal tides are expected so minor coastal flooding will be possible on east facing shorelines, primarily at high tides. Increasing and deepening moisture across the region will lead to increased coverage of showers and thunderstorms through Wednesday. A pattern change will occur during the middle and end of the week period as the ridge finally buckles as the trough lifts northeast and pushes a long awaited cold front through the region. In the wake of the front, cooler and much drier air will prevail for the end of the week and through the weekend. Dew points will dip into the 50s allowing lows to drop below average. Highs will be close to normal in the upper 70s and low 80s. Another cold front will push across the area Sunday into Sunday night reinforcing the cooler air into early next week.