The National Weather Service has continued the FLASH FLOOD WATCH through Friday evening for all local parishes and counties EXCEPT Amite, East Feliciana, Pike, Pointe Coupee and West Feliciana. Nicholas continues to slowly drift east near Lake Charles with copious amounts of gulf moisture continuing to stream into the area. Additional rain amounts of 2 to 4 inches with locally higher amounts are possible over the next several days.

Today & Tonight: Showers and storms will be scattered this afternoon, but since the ground is already so saturated, it will not take much to cause isolated flooding problems. Continue to use caution on the roads especially when it is actively raining. All this rain will keep temperatures trending in the low to mid 80s with high humidity.

There is some ongoing river rise with some local rivers expected to meet or exceed flood stage in the next few days. The smaller creek and stream levels continue to rise and fall but are staying well below the levels that were reached in May. 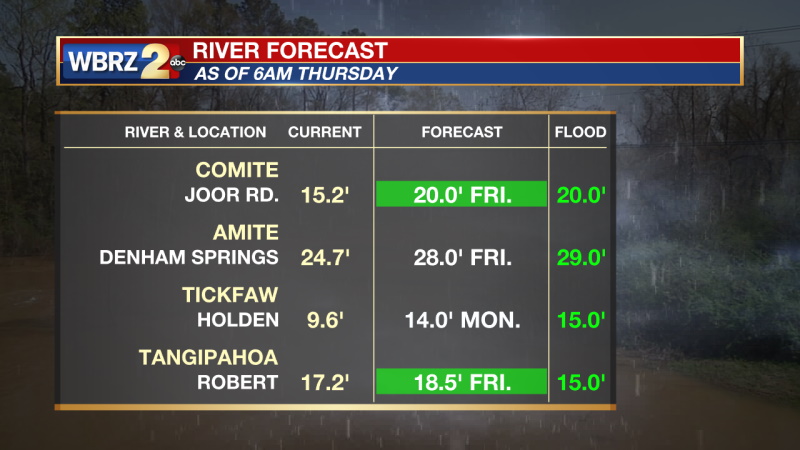 Up Next: Tropical moisture will be in the area for the next 7 days. Flash flooding will be a concern through Friday evening. Showers and storms will continue to be scattered through early next week. Since there will be so much available moisture skies will be mostly cloudy and showers will be able to pop up in the morning as well as the afternoon. Not all areas will see rain every day. Temperatures will continue to trend below normal in the mid-80s. Click here to see the 7-day forecast.  Late next week some dry air will be moving south over the Midwest and it may make it to the Gulf Coast. The WBRZ Weather team is tracking it closely. 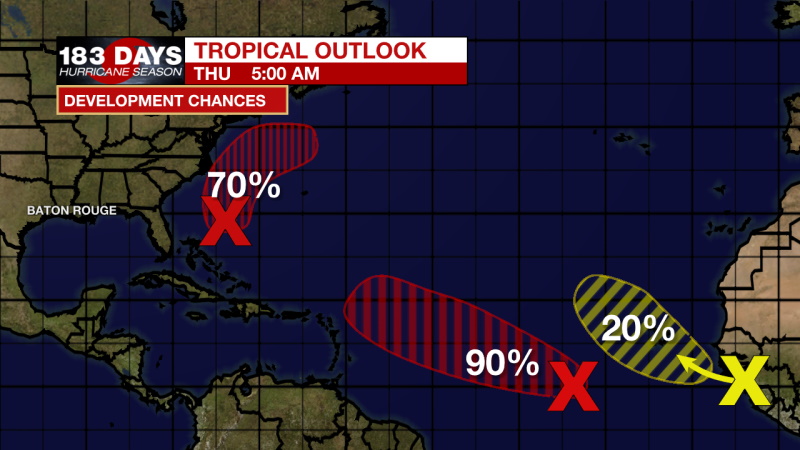 Showers and thunderstorms have changed little in organization in association with an area of low pressure located more than 500 miles west-southwest of the Cabo Verde Islands. In addition, earlier satellite derived winds indicated the system also lacks a well-defined center. However, environmental conditions are still expected to remain conducive for development, and a tropical depression is likely to form during the next couple of days. This system is expected to move westward to west-northwestward across the tropical Atlantic during the next several days. There is a 90% chance of development in the next 5 days.

Shower activity remains poorly organized in association with a broad low pressure system located several hundred miles to the south-southeast of the Outer Banks of North Carolina. Environmental conditions are expected to become more conducive for development, and a tropical depression is still likely to form during the next day or two while the system moves north-northwestward to northward off the southeast U.S. coast.  Regardless of development, this system could bring high surf to portions of the southeast and mid-Atlantic U.S. coasts later this week. Additional information on this system, including gale warnings, can be found in High Seas Forecasts issued by the NOAA Ocean Prediction Center. There is a 70% chance of development in the next 5 days.

A tropical wave located just inland over Africa is expected to emerge off the west coast of Africa in the next day or so. Thereafter, environmental conditions are forecast to be somewhat conducive for additional development while the system moves west-northwestward to northwestward over the far eastern Atlantic. There is a 20% chance of development in the next 5 days.

Reminder: With the threat for impactful weather—localized flooding—please have access to alerts through Saturday. You can download or activate the WBRZ WX App on your Apple or Android device or turn on a NOAA Weather Radio for bulletins such as watches and urgent warnings. Of course, WBRZ, WBRZ+ and the Cable Weather Channel will have updates as active weather dictates.