Mostly sunny skies and no rain chances for Thursday.

Today and Tonight: It will be sunny and hot today! The humidity will be manageable and heat index values will stay below the 100-degree mark. Rain chances today are near 0%. It will be possible to see a few afternoon showers along the coastline, but the WBRZ viewing area will be dry. Overnight lows will be near 72 degrees tonight.

Up Next: New forecast data is showing rain making a return on Friday afternoon. Everyone from Mississippi to the coast should expect to see isolated showers tomorrow. Friday temperatures will still be in the mid to low 90s. The rainy pattern will persist into the weekend and through most of next week. In areas between the rain, temperatures will be in the low 90s and it will be cooler in areas that do see rain.

As of Thursday at 4 am, both Tropical Storms Paulette and Rene are forecast to become category 1 hurricanes out in the open Atlantic. Neither of these systems is a threat to the Gulf of Mexico. Meanwhile, the Atlantic waters along the western coast of Africa look very favorable for additional tropical development. There is also a new disturbance just west of Florida that could move into the Gulf of Mexico. The development chances for that system are low at this time. Stay with the WBRZ Weather Team as we track these developments around the clock.

At 500 AM AST (0900 UTC), the center of Tropical Storm Paulette was located near latitude 20.9 North, longitude 49.0 West. Paulette is moving toward the west-northwest near 10 mph (17 km/h) and this general motion is expected to continue through Friday. A northwestward motion should begin Friday evening and continue into the weekend. Maximum sustained winds are near 60 mph (95 km/h) with higher gusts. Some weakening is forecast during the next couple of days. Restrengthening is expected to commence over the weekend. Tropical-storm-force winds extend outward up to 205 miles (335 km) from the center. The estimated minimum central pressure is 996 mb (29.42 inches). 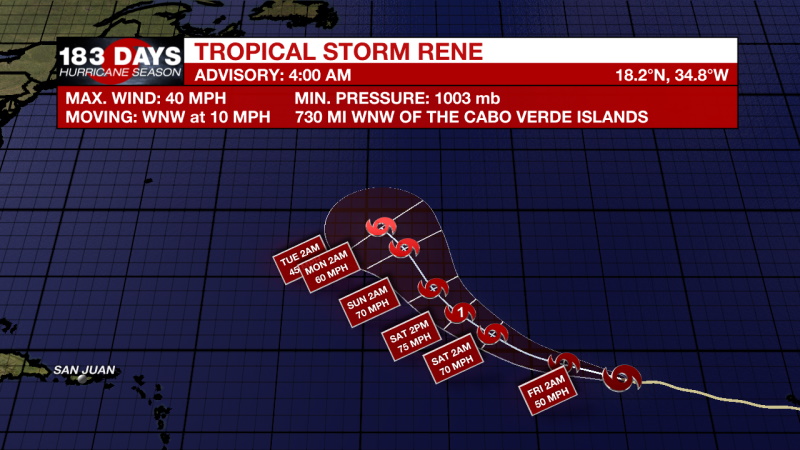 At 500 AM AST (0900 UTC), the center of Tropical Storm Rene was located near latitude 18.2 North, longitude 34.8 West. Rene is moving toward the west-northwest near 10 mph (17 km/h). This general motion is expected to continue for a couple of days, followed by a turn toward the northwest. Maximum sustained winds are near 40 mph (65 km/h) with higher gusts. Gradual strengthening is forecast during the next 48 hours, and Rene is expected to be near hurricane strength by Friday night. Tropical-storm-force winds extend outward up to 70 miles (110 km) from the center. The estimated minimum central pressure is 1003 mb (29.62 inches). 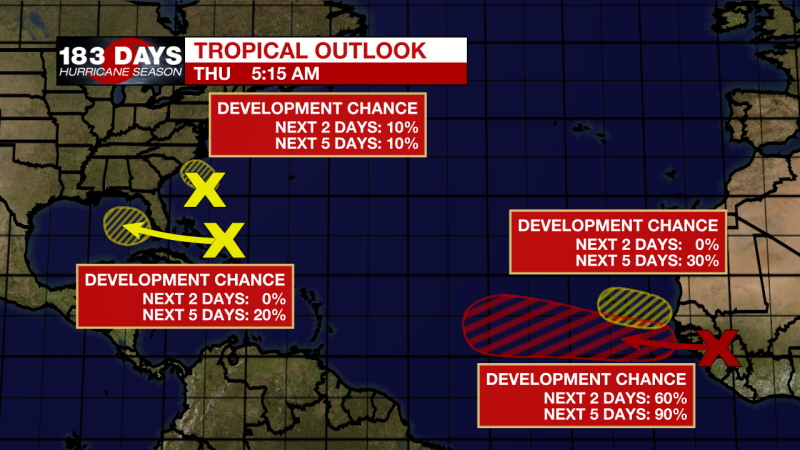 Satellite wind data and surface observations indicate that the low-pressure area of the coast of the Carolinas has weakened to a trough. The system is forecast to move northwestward at 10 to 15 mph and move inland over eastern North Carolina this afternoon, and the chances for significant development by that time are decreasing. Interests along the coasts of North and South Carolina should continue to monitor the progress of this disturbance.

A large area of disorganized showers and thunderstorms is centered a couple of hundred miles northeast of the Central Bahamas. This system is forecast to drift westward and will likely be in the vicinity of the Florida peninsula on Friday. Afterward, upper-level conditions could become conducive for some development this weekend while the system drifts west-northwestward over the eastern Gulf of Mexico.

A tropical wave is forecast to move off the west coast of Africa later today. Gradual development is anticipated once the system moves over water, and a tropical depression is expected to form late this week or over the weekend while the system moves generally westward across the eastern tropical Atlantic.

Another tropical wave is forecast to emerge off the west coast of Africa this weekend. Environmental conditions could be conducive for slow development over the far eastern tropical Atlantic Ocean early next week while the wave moves slowly westward.