The tropics are busy, scroll down for the latest update.

Today and Tonight: The boundary that moved through yesterday is mixing up our general flow. This means more moisture is moving into our area today. Showers are likely to start up around 1 pm and stick around for the rest of the afternoon. About 50% of the viewing area will see rain while the others will see building cloud cover. Showers and storms today will be capable of a heavy downpour, gusty winds, and frequent lightning. Between the showers, temperatures will heat to near 91 degrees. Showers and storms will die out as the sun goes down and overnight temperatures will cool to near 70 degrees.

Up Next: Friday does have a chance for afternoon showers, but it will be drier than today. You can expect building clouds throughout the day and only about 30% of the viewing area will have rainfall. Since today will be rainy, much of the rain-cooled air will stick around and keep temperatures in the low 90s again tomorrow. Moving into the weekend, showers will continue to bubble up in the afternoons and temperatures will stay in the very low 90s. Overnight lows will be in the mid-70s. 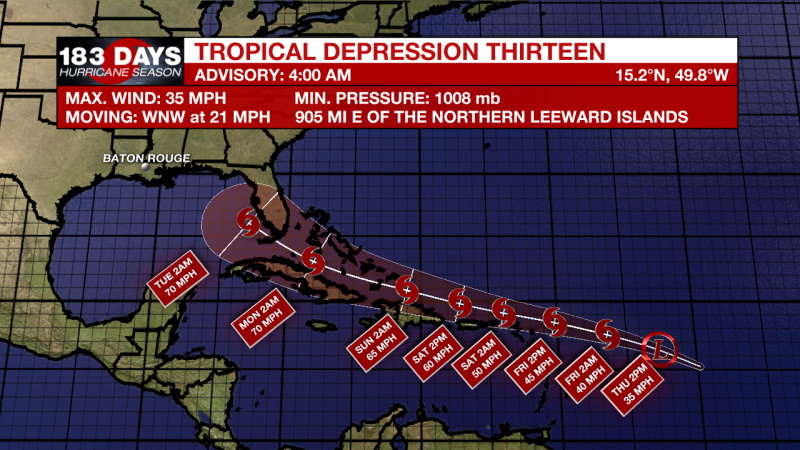 Tropical Depression Thirteen formed late on Wednesday night. This system currently has maximum sustained winds near 35 mph. It is forecast to become a tropical storm later today, and then it will pick up the name Laura. The most recent forecast cone has this system entering the Gulf of Mexico on Tuesday. Many forecast details are unknown. The WBRZ Weather Team is monitoring this storm around the clock. 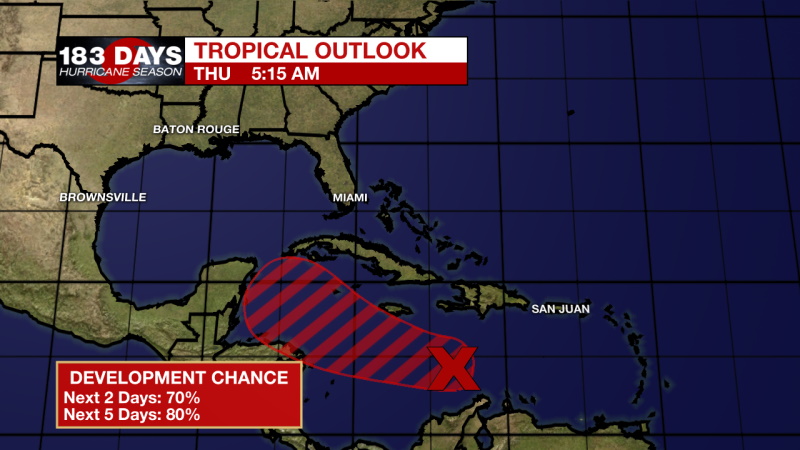 There are also two other disturbances the team is tracking. There is an invest in the Caribbean Sea with a high chance of tropical development. It is likely it will form into a tropical depression within the next several days. This system is currently on track to enter the Gulf of Mexico next week. It does not yet have a center of circulation. 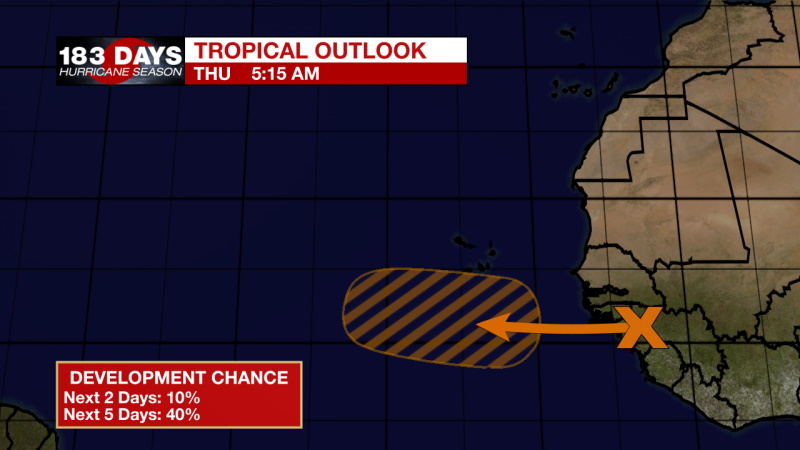 A third tropical system is currently near the western coast of Africa and has a medium chance of development over the next 5 days. This system is not an immediate concern for the local forecast.

Tropical Depression Thirteen: At 500 AM AST (0900 UTC), the center of Tropical Depression Thirteen was located near latitude 15.2 North, longitude 49.8 West. The depression is moving toward the west-northwest near 21 mph (33 km/h) and this motion is expected to continue for the next few days. On the forecast track, the depression is expected to move near or north of the northern Leeward Islands by late Friday and near or north of the Virgin Islands and Puerto Rico on Saturday.

Maximum sustained winds are near 35 mph (55 km/h) with higher gusts. Gradual strengthening is forecast, and the depression is expected to become a tropical storm by later today. The estimated minimum central pressure is 1008 mb (29.77 inches).

Invest in the Caribbean Sea: A tropical wave and accompanying broad area of low pressure is producing an area of showers and thunderstorms over the central Caribbean Sea. This system is gradually becoming better organized, and a tropical depression is likely to form in a couple of days when the system reaches the northwestern Caribbean Sea. This system is moving westward, and interests in Honduras and the Yucatan Peninsula should closely monitor its progress. Regardless of development, this disturbance will likely produce heavy rains across a large portion of Central America and southeastern Mexico late this week and this weekend.

Disturbance near the West African coastline: A tropical wave over western Africa is producing disorganized showers and thunderstorms. This wave is expected to move over the far eastern tropical Atlantic on Friday, and some slow development is possible through the weekend while it moves west-northwestward at 15 to 20 mph across the eastern tropical Atlantic.