After a long stretch of warm, but mostly dry weather, some showers and thunderstorms enter the forecast. Temperatures will be persistent though.

Today and Tonight: A cold front will try to sneak into the region on Thursday evening. Associated showers and thunderstorms will arrive in the northwestern half of the forecast area, making it a close call on late day precipitation for the city. Overall, the best chance for rain will be north of I-10 and west of the Mississippi River. Prior to any precipitation, partly sunny skies and highs in the low 90s are expected. Overnight, showers will dissipate with low temperatures in the low 70s.

Up Next: The weakening cold front will crawl across the area on Friday, but provide enough of a trigger to create scattered showers and thunderstorms. This time, the southern half of the forecast area will stand the best chance. About 40 percent of the area will receive rain. As you know, warm season storms can bring downpours and frequent lightning with the occasional wind gust.  Rain coverage will again diminish over the weekend with highs reaching the low 90s and lows stopping in the low 70s. Mainly clear skies and above average temperatures are likely through the first half of next week.

Baseball Regionals: LSU may have to dodge lingering showers on Friday evening during their matchup with Stony Brook. Regardless, it will be muggy with temperatures in the mid to upper 80s. Southern will face a lower chance of rain in Starkville with thermometers in the mid 80s for their noon start against Mississippi State.

The Mississippi River: At Baton Rouge, major flood stage continues with a level of 43.5’ as of Wednesday morning. Peaking at 44.1’ on March 19, the river set its 7th highest recorded crest at Baton Rouge. At 145 days, this year marks the longest period above flood stage at Baton Rouge. With continued heavy rain events in the Midwest, runoff will result in a second, higher crest in early June. The current forecast is for the level to reach 44.5’, which would be one of the top five highest crests on record. The Morganza Spillway will be opened to mitigate flood risk downstream into the Baton Rouge area. 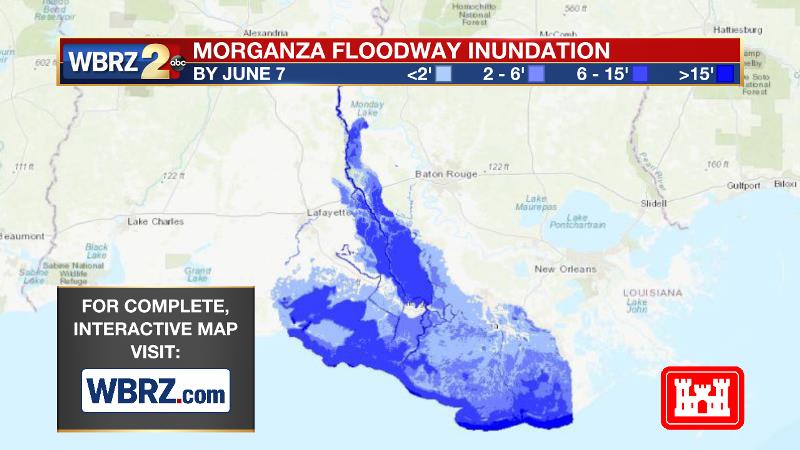 A large surface high pressure system and upper level ridge will breakdown and nudge east on Thursday, allowing rain coverage to increase north and west of Baton Rouge. A cold front will approach from the west, which should provide the lift needed to spark development while a touch more instability is anticipated due to the lowering atmospheric heights associated with the departing ridge. The northwestern half of the 13 Parish, 3 County forecast area will have the best chance at rain during the late afternoon and early evening hours. Then on Friday, with the weakening front on top of the region, scattered showers and thunderstorms are expected—especially for the southern half of the forecast area. If the front can make a clean pass, it will take all day Friday to happen. The weakening boundary will bounce north and east of the forecast area over the weekend and allow some slightly drier air to sneak into the northeastern half of the forecast area—most notable with overnight lows closer to average. 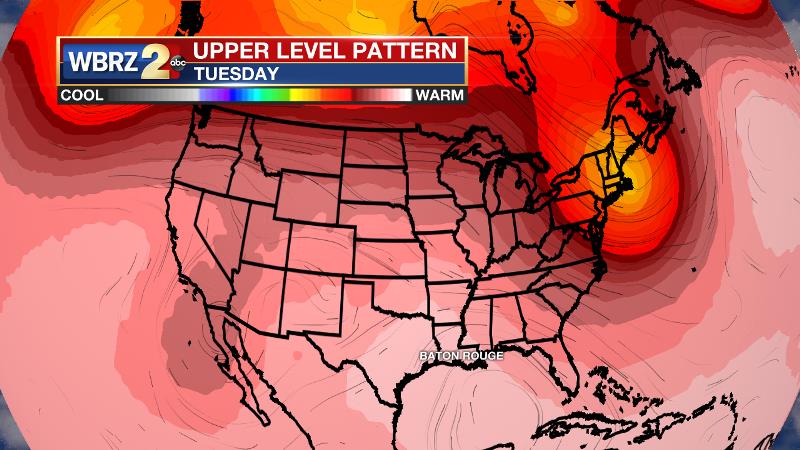 A ridge once again will strengthen over the area by early next week. With that, rain coverage will quickly wane with above average temperatures anticipated through Wednesday.