Some sun was around on a milder Thursday morning. However, clouds will now dominate until the end of the weekend. Beyond that, we will find a rather tranquil stretch of weather until the end of next week when very cold air could move into the region.

The Next 24 Hours: A cold front will enter the region overnight. Ahead of this, temperatures will remain mild and in the 60s. A broken line of showers is expected to move through between midnight and dawn Friday. Rain amounts will be light and thunder will be hard to come by. The cold front will settle in the northern Gulf of Mexico on Friday morning with temperatures backing into the mid to upper 40s. The weakening boundary will remain close enough to the area for cloud cover to persist and scattered showers to hang on. As northerly winds take hold behind the front, the area will be stuck with an unpleasant, dreary day with temperatures generally in the mid to upper 40s.

After That: Chances are, the old cold front will not move much by Saturday and therefore the dreary conditions will be maintained through the first half of the weekend. A weak, reinforcing front is expected to clear the region of clouds and showers for Sunday and Monday. Both days, expect lows in the low 40s and highs in the mid 60s. The forecast for the end of next week is challenging and uncertain at this time. The cold air locked up to the north could dislodge and head south with a slow moving cold front to deliver a cold rain Thursday. Beyond that, and beyond a reasonable forecast window for good predictability, forecast models are showing some low temperatures that range from freezing to the teens and even the possibility of wintry precipitation as well. Again, this is beyond the scope of a reliable forecast but in the era of social media, we wanted to let you know that we are watching it. A bit more detail is provided below. CLICK HERE to view your complete 7-Day Forecast.

We are continuing to catch a signal from the models about some *very* cold air for the #BatonRouge area next weekend. The natural, follow-up question is "what about precipitation?" | MORE HERE: https://t.co/EeuFdhq7Na pic.twitter.com/Dkwl32ftmZ

The Explanation: As a cold front slips into the region Thursday night and Friday morning, expect and thin line of rain to develop. As the front pushes south across the central Gulf Coast, winds aloft will remain west to east meaning that the front will lose its southward push. As the cold front stalls in the northern Gulf, southwest winds aloft will force air over the boundary allowing showers to reinvigorate to the north. With north winds sending cold air across the area, continued clouds cover and scattered showers, temperatures may not warm out of the 40s. The stalled boundary is likely to stay put through Saturday so conditions could stay dreary with clouds and lingering showers, especially south of I-12. If the front can drift a little farther south, there is a chance for some sunshine Saturday afternoon. A second cold front will push into the region Saturday evening with one last wring out of showers. Drier air will follow this system and a two to three day stretch of mainly clear skies is expected. The upper level trough driving these fronts will remain over the northern third of the country and lock the colder air up there with it. Therefore, next week is likely to begin with above average, rather than below average temperatures. A series of fast moving shortwave troughs and associated weak front could cause clouds and showers to stay in play through Wednesday. Once that upper level trough does release, the cold air that builds up behind it will likely be released south and this could happen toward the end of next week. It looks like a front will arrive with rain and maybe even thunderstorms on Thursday. This is where the traditional 7-Day Forecast ends with predictability and accuracy barely better than a coin flip from 8 days onward. 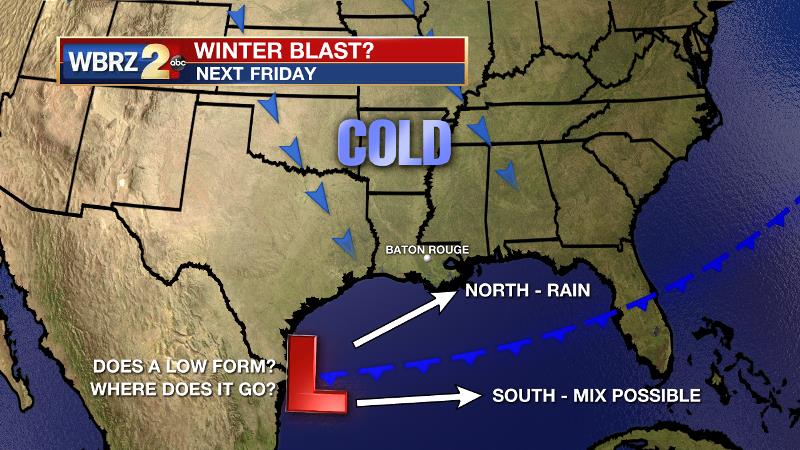 However, forecast models are suggesting that a very cold air mass will invade Friday and Saturday with lows possibly dipping into the teens and 20s. Additionally, and viewed with even less confidence, is the potential for a new storm system to develop in the western Gulf and send precipitation across Louisiana and Mississippi in conjunction with the very cold air. Both the American and European model have hinted at frozen precipitation on Friday or Saturday for a few days now. How far south with the coldest air go? Will a low pressure system develop after the cold air arrives? Where will that low pressure system move? We have plenty of time to watch. Expect changes and updates.