36 hours of quiet weather will start the new week. A frontal system returns the possibility of showers and thunderstorms Tuesday through Halloween followed by the coolest temperatures of the fall season.

Today and Tonight: Clouds have been more stubborn than expected across the Baton Rouge area over the last day or so. However, some clearing is finally expected to occur by Monday afternoon, if not sooner. Peeks of sunshine will guide high temperatures back into the low 70s. Overnight will be partly cloudy with low temperatures in the upper 50s.

Up Next: A warm front will life north through the Gulf of Mexico and bring a slug of tropical moisture with it. Therefore, by Tuesday afternoon, some clouds will return and even a few showers are expected to develop. The warm front will act on the area with showers through Wednesday morning before the next cold front brings an increase of rain and thunderstorm activity late Wednesday through early Thursday. Right now, it looks like precipitation will end just in time for trick-or-treaters. The coolest temperatures so far this fall season will follow. Friday through Sunday will be clear with highs in the low 60s and lows in the low 40s.

The Tropics: Tropical Storm Pablo is way out in the northeastern Atlantic producing 45mph winds. The storm will continue to move north until dissipating by Tuesday morning. A second wave in tropical “nether land” over the north Atlantic is only given a 20 percent chance of becoming a subtropical storm as environmental conditions will gradually become more unfavorable through the end of the week.

The local area has about a day and a half of quiet weather before rain chances increase. Continued dense cloud cover north of I-12 is expected to erode from the south into the afternoon hours as thermometers slowly warm. Clouds make temperature forecasts difficult as those locations that do not clear will obviously remain cooler. On Tuesday, an upper level ridge centered near the Bahamas will shift west. This will steer a weak tropical wave into the southern Gulf of Mexico and then north towards the central Gulf Coast. The ECMWF model suggests rain associated will expand across the entire area while the GFS model keeps it all offshore. Combining those two ideas, our team is forecasting showers across the area late Tuesday and overnight into Wednesday. In addition, it will be breezy along the coast as the local pressure gradient tightens. This may cause higher than usual tides and the National Weather Service may need to issue a coastal flood advisory. 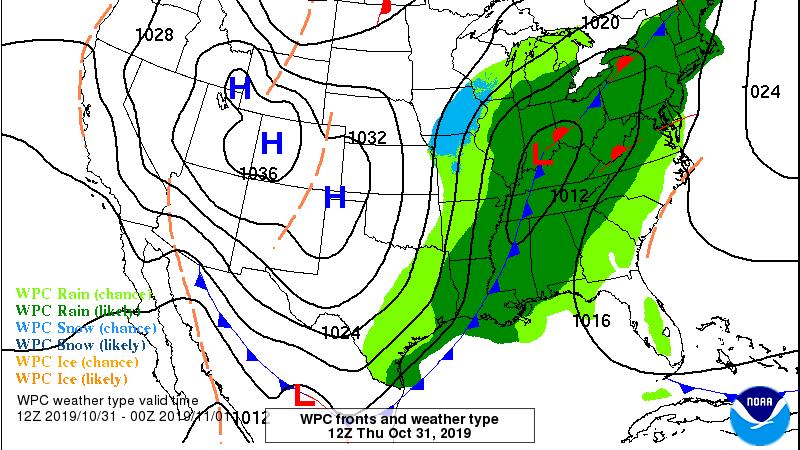 Wednesday and Thursday look to be the most unsettled days of this week. An upper level trough will drive a cold front across the Mississippi River Valley, bringing showers and thunderstorms. Rainfall amounts are expected to be in the 1 to 2 inch range however, any downpours could cause some isolated higher totals. A strong surface high pressure system will push into the region behind the front delivering the coldest air of the young fall season. By Friday morning, temperatures should be bottoming out in the 40s for much of the area and even some upper 30s will be possible for a few spots in southwest Mississippi.  Daytime highs Friday afternoon will struggle to top 60 degrees. Similar temperatures will last through the weekend with mainly clear skies.