The last time most of the local area saw measurable rain was September  9. That streak is expected to be broken this week.

Next 24 Hours: Skies will remain clear overnight with light, northeast winds. Low temperatures will top around 55 degrees. On Tuesday, sunshine will eventually be filtered by some high clouds moving in from the west. High temperatures will peak near 85 degrees.

Up Next: A frontal system will work into the region for the middle of the week. As moisture (finally) returns to the atmosphere, enough instability is expected on Wednesday afternoon for scattered showers and thunderstorms to develop. The cold front will quickly trail overnight into Thursday and this feature will be able to squeeze out a few more showers and thunderstorms, most likely in a narrow line. Most of the activity is expected to end around or before dawn Thursday. Drier conditions are anticipated for the remainder of the week with near average temperatures—which is highs near 83 and lows near 60 this time of year. CLICK HERE for your detailed 7-Day Forecast. 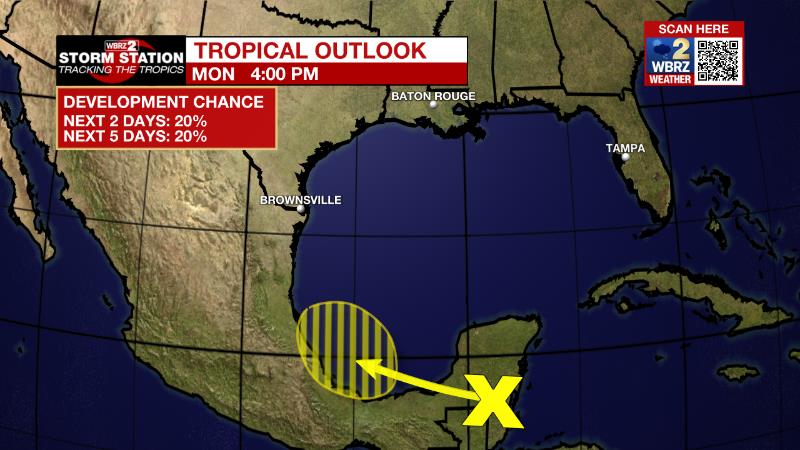 The Tropics: A trough of low pressure over the Yucatan Peninsula is producing disorganized showers and a few thunderstorms. There is a twenty percent chance of development on Tuesday and Wednesday as the system moves slowly west-northwestward to northwestward over the far southwestern Gulf of Mexico.  Increasing upper-level winds should prevent significant development late this week. Regardless of development, heavy rain is expected over portions of southern Mexico, Belize, and Guatemala during the next couple of days.

The Explanation: Tuesday into Wednesday, an upper level trough of low pressure will swing into the region. In advance, southerly surface winds will draw warmth and moisture inland from the Gulf of Mexico. For the first time in weeks, the atmosphere will have sufficient moisture content as instability increases due to cooler temperatures aloft brought in by the upper level trough. As a result, scattered showers and thunderstorms will develop on Wednesday afternoon. A cold front will then move into the region Wednesday night into Thursday. One last band of showers and thundfetrstp4rms is expected with this feature before much drier pushes in ending precipitation. Deep, northwesterly winds will persist Thursday night through Sunday with mainly clear skies and near average temperatures. Another cold front will approach the area Sunday night into Monday and this system should be able to tap into enough moisture for some rain.