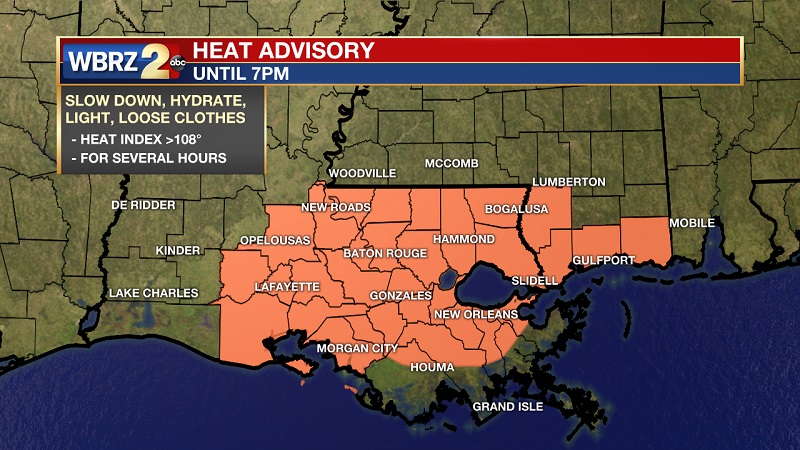 Today and Tonight: Another oppressively hot day ahead to start your workweek. A Heat Advisory is in effect for all southeastern parishes in Louisiana, extending from Lafayette to New Orleans. Temperatures will be warming quickly, breaking into the 80s around 8 AM and 90s around your lunch hours. Highs will top out near 96°, with heat index values hovering between 105° to 108°. Winds will stay light and out of the west through the day and into this evening. Temperatures will be slow to cool, only dropping into the 80s around 8 PM tonight, as overnight lows drop near 76°. 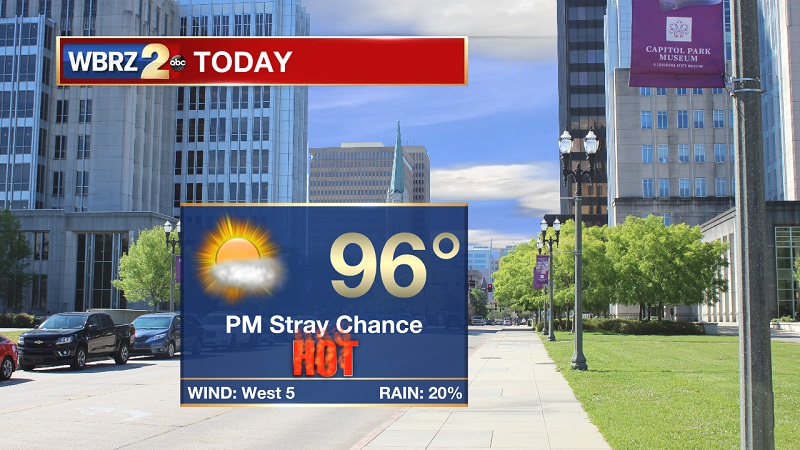 Up Next:  The heat continues through the rest of the week, as highs stay above average through Friday. Rain chances will increase though through the latter half of the week associated with a potential tropical influence. 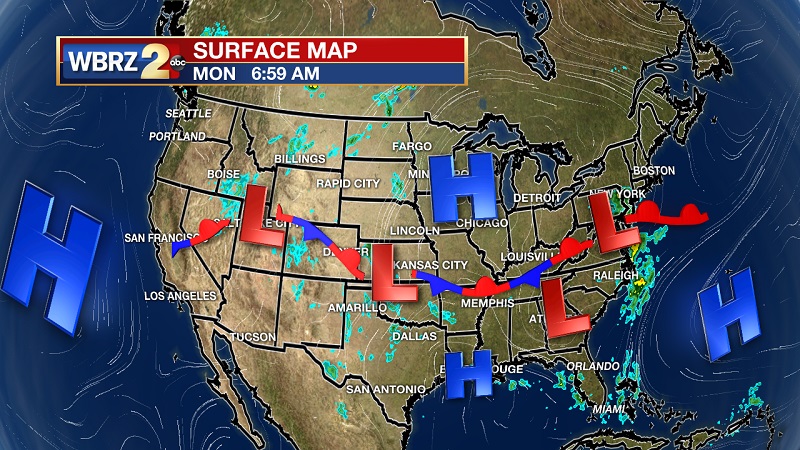 The Tropics: A trough of low pressure located over central Georgia is forecast to move southward toward the northeastern Gulf of Mexico, where a broad area of low pressure is expected to form in a couple of days. Some gradual development is possible thereafter and a tropical depression is likely to form by the end of the week while the low meanders near the northern Gulf Coast. Regardless of development, this system has the potential to produce heavy rainfall along portions of the northern and eastern U.S. Gulf Coast later this week. Currently, weather models are in disagreement about intensity and forecast path, but most are hinting at a more westerly track and onto the south Texas Coast. It is still too far out to determine its exact movement late this week, so it is imperative to stay up-to-date with developments. The low should begin to develop along the panhandle of Florida on Thursday, and tracking back onshore over the weekend. The National Hurricane Center forecast a 30% of tropical formation in the next 2 days, and an 80% chance in the next 5 days. They also are hinting at the fact that this could form into a tropical depression over the northeastern Gulf of Mexico by the end of the week. 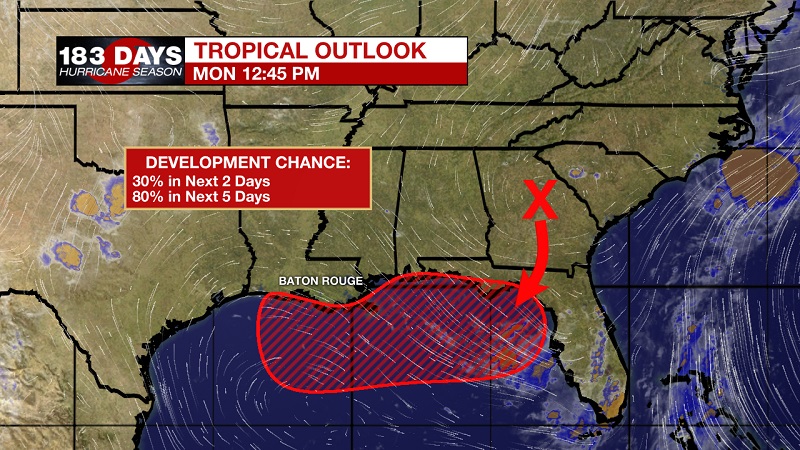 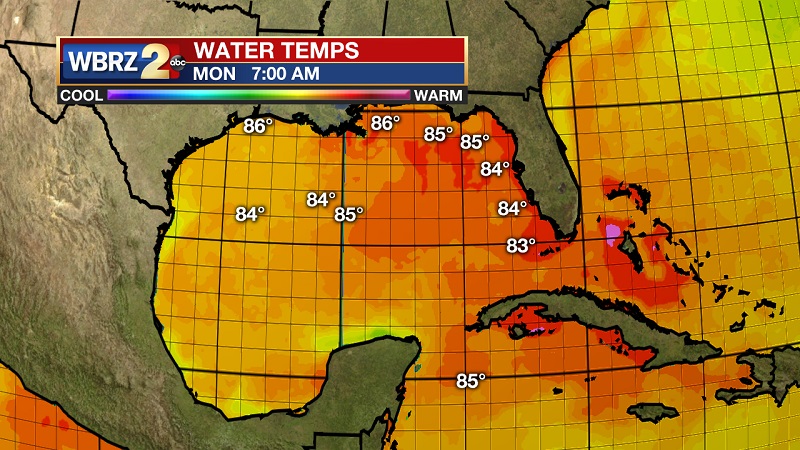 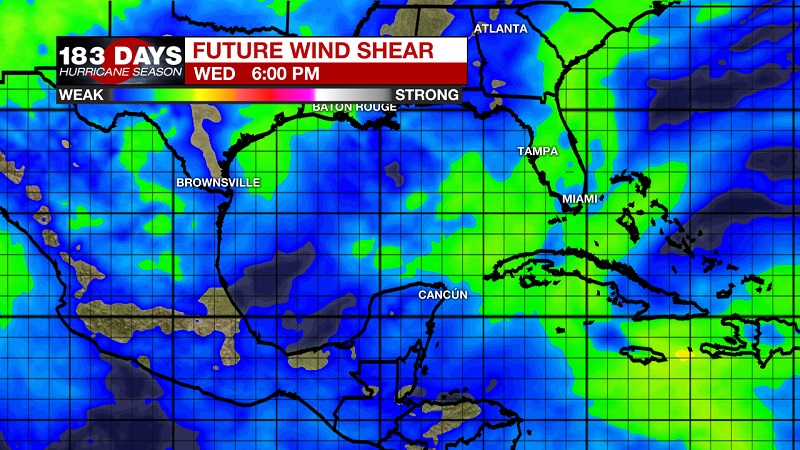 More hot and humid weather is in the forecast through the early part of the workweek, as high pressure is still the dominating and located in southwest Louisiana. Since it is not directly over us anymore and shifting west, Gulf moisture will now be able to efficiently move onshore to provide isolated afternoon showers and storms Monday and Tuesday. The high continues west into Texas through the midweek, bumping up the available moisture as afternoon storms become more scattered Thursday and Friday. Winds will stay out of the south through the week, keeping high temperatures hot and above average in the mid-90s. There is now a fairly good chance of a low to develop into a tropical system just offshore of Florida’s panhandle later in the week, as the National Hurricane is forecasting an 80% chance of tropical develop within the next 5 days. This is based on the fact that sea surface temperatures are in the upper 80s, and upper-level wind shear is low in the eastern Gulf. This shear does increase late in the week and through the weekend over the west coast of Florida, which should push the system west into the Gulf of Mexico. Model are hinting at this, but still have a tough time after the wave makes it in the Gulf and increases to a low pressure. Regardless of model confidence, we are likely to experience enhanced rain chances beginning Friday and extending through the weekend. We are still about 3 days out from this low potentially forming, and 5 to 6 days out from impacting the Gulf Coast, so forecast confidence is low. It is important to stay updated on this storm’s potential to gain tropical characteristics, and its forecast track. Stay Tuned.