"The Rain is on the Way"

Another muggy and humid night ahead, as temperatures will be sticking in the 80s until around midnight. Overnight, temperatures will eventually reach around 76°, as clouds will be breaking up late this evening. Mostly sunny skies to start your Monday, but clouds will be building as we approach noon. Isolated showers and storms possible, mainly along the coast earlier in the afternoon, but will proceed more inland late afternoon and through the evening hours. It will be another hot day, as high temperatures will be reaching around 92°, with heat index values hovering between 101° and 103° during peak afternoon hours.

Showers and storms set to ramp up as we head into the midweek, peaking on Wednesday. This will help to cool temperatures down, keeping them below average for much of the week ahead. Highs will stay in the mid to upper 80s Wednesday, before the heat returns as we get closer to the weekend.

Beryl has now been downgraded to a remnant low, and is on her last leg. Currently located 455 miles north-northeast of Bermuda and 420 miles south of Halifax, Nova Scotia, and moving much faster to the east-northeast at 13 mph. Beryl's winds have slowed to 35 mph. She should turn toward the northeast and faster forward speed is expected Monday, with this motion continuing through early Tuesday. Gradual weakening is expected during the next two days, with the low forecast to dissipate Tuesday. The National Hurricane Center will not be issuing any additional tropical advisories for Beryl, as she slowly becomes no more. 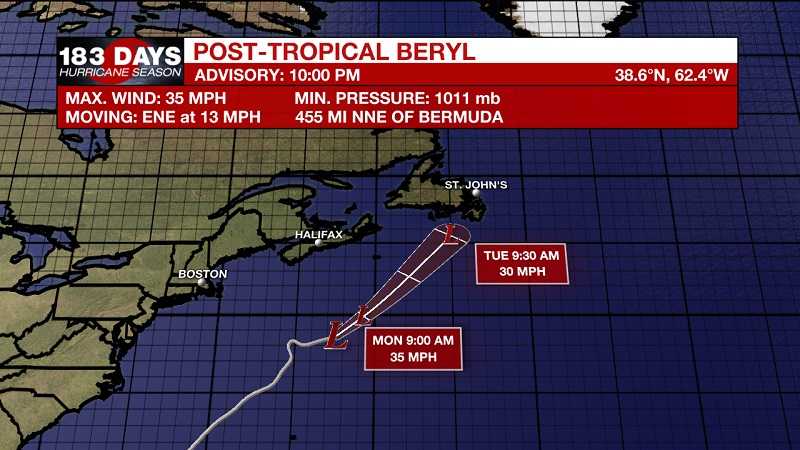 The high pressure that has been camping out in the Gulf is beginning to lose its strength. The timing is rather good, since the cold front that is draped into Arkansas and Oklahoma is about to get reinforced by another frontal system. This will be enough to increase shower chances as we head into the workweek, which will produce waves of moisture moving from the north beginning late Monday afternoon. These will gain in intensity as we move into Wednesday, as a second frontal system drops from Canada to continue the strengthening of the original front stalling from Tennessee through Oklahoma. The additional push south from the front should be enough for the system to move into Northern Louisiana and Central Mississippi, bringing scattered showers and storms across the area late Tuesday through early Thursday. The cold front will finally move onto the East Coast later in the week, as a high moves in from Canada to help push it along. We should begin to see another high pressure ridge set up by Friday, bringing back drier days, but also cranking up the heat. High temperatures are expected to reach in the mid-90s Friday and linger into the weekend. 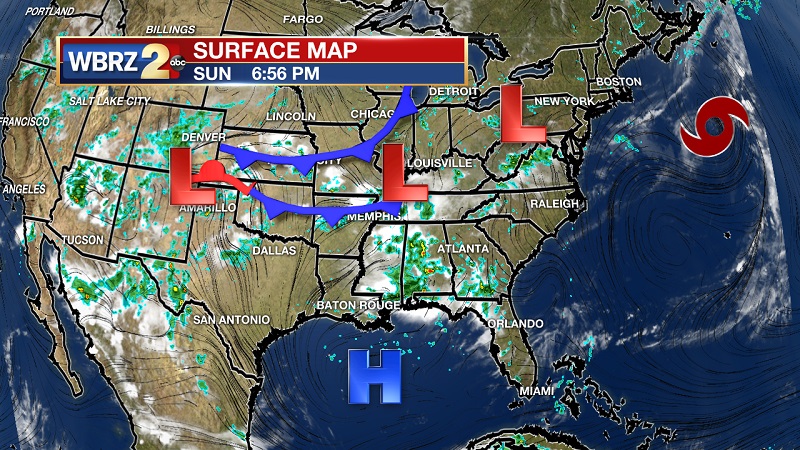