Hot temperatures will grab weather headlines through the weekend. While enjoying outdoor events during that time, keep water in the mix and be aware of the signs and symptoms of heat illness.

Today and Tonight: The chance for showers and thunderstorms is low to nil. Temperatures will burn their way into the mid 90s under mainly sunny skies. Expect a muggy, still evening for WBRZ’s Fireworks on the Mississippi with a temperature near 84 degrees at 9pm. Overnight lows will slip another 10 degrees or so from there.

Up Next: A warmer atmosphere will encompass the central Gulf Coast through Sunday. Rain coverage will be at a minimum. High temperatures will be making it into the mid-90s, with some spots potentially reaching into the upper-90s. Heat index values will exceed 105 degrees for several hours each afternoon and heat alerts may be posted by the National Weather Service. High dew point temperatures will keep it stuffy overnight with low temperatures in the mid 70s. Showers and storm chances may bump up by early next week. 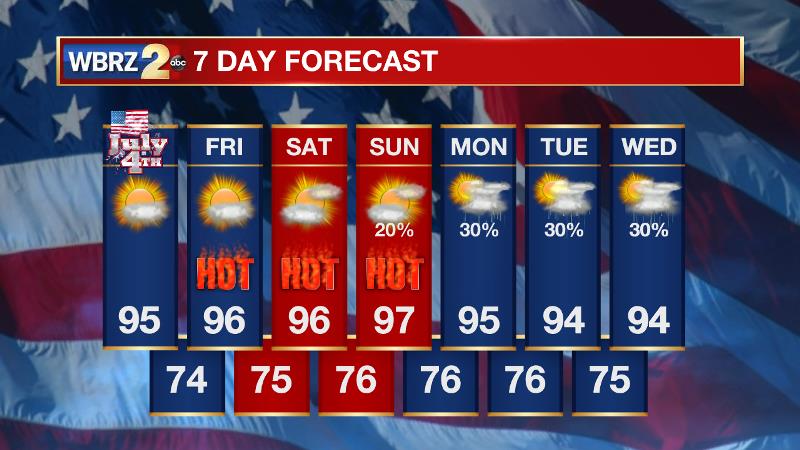 The Mississippi River: At Baton Rouge, major flood stage continues with a level of 42’ as of Wednesday morning. Peaking at 44.1’ on March 19, the river set its 7th highest recorded crest at Baton Rouge. At 179 days, this year marks the longest period above flood stage at Baton Rouge. The level will slowly fall, but is likely to stay above flood stage for several weeks to come. The high water will remain an issue for river traffic and river islands, although some inundation will continue for unprotected low-lying areas. The city of Baton Rouge and the main LSU campus are protected by levees up to 47 feet. Some soggy areas and seepage may be noted due to the long duration of high water placing pressure on the levees. As some of the Mississippi River diverts into the Atchafalaya River, gauges at Krotz Springs and Morgan City will stay high as well. This creates backwater flooding in parts of Assumption Parish in areas such as Bayou Chene, Stephensville and around Lake Palourde.

An upper level ridge will build over the region through Saturday. Compressional warming will lead to some very warm temperatures while the sinking motions overcome convective development. Highs in the mid 90s are likely with upper 90s possible. Even though the atmosphere will dry out a bit, the surface certainly will not. With high dew points accompanying the warmer temperatures, heat indices will likely go well over 105 degrees for several hours. The National Weather Service may issue some heat bulletins—especially with many taking part in outdoor activities. A persistence forecast will be carried through the weekend. Some weakness in the mid-level ridge may penetrate from the east by early next week allowing just enough instability for some showers and thunderstorms to develop.