It will be a rather unsettled finish to the week with showers and thunderstorms. However, fall-like air will push in for the weekend.

Today and Tonight: Scattered showers and thunderstorms are expected Friday in association with a cold front moving through the area. The threat for severe thunderstorms is low. While this could deliver some needed rain to much of the area, the possibility is there for rain to come too fast and create some isolated area nuisance flooding. 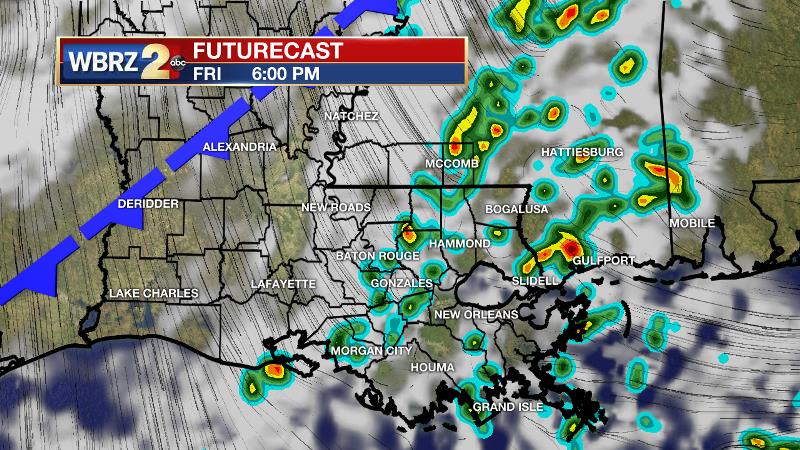 Temperatures may make into the middle 80s if there are enough breaks in the clouds. Once the boundary crosses around dusk, expect a sharp drop in temperatures in a short time. Showers will taper this evening from northwest to southeast. Some drizzle and cloud cover may persist through the night. North winds will send temperatures tumbling into the upper 50s overnight.

Up Next: Clouds could linger well into Saturday morning followed by some sun later in the day. Temperatures will be in the upper 50s at daybreak and barely sneak into the 70s during the afternoon. For LSU and Southern fans, this will mean that jackets are needed for morning tailgates and the evening games! Temperatures will slide into the 60s after dark and continue down into the upper 50s Sunday morning. A quick rebound to average temperatures is expected for Sunday afternoon into early next week. Showers and thunderstorms will be in the forecast Monday to Wednesday ahead of the next front. 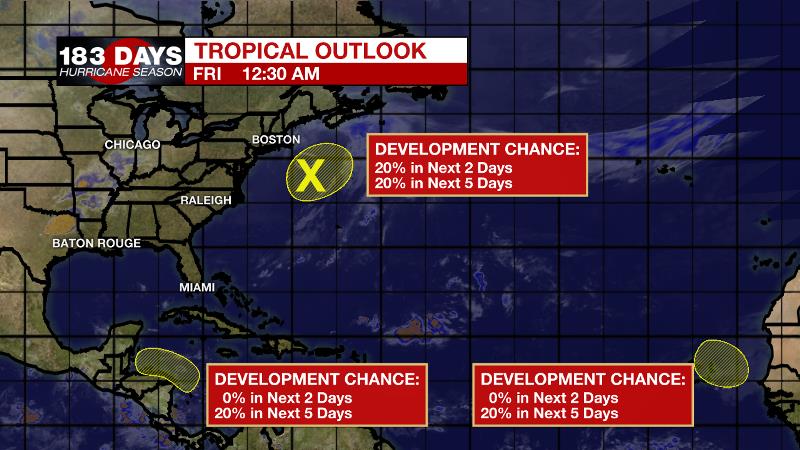 The Tropics: Overall, the Atlantic Basin is not terribly troubling at this time. An area of lower pressure off the East Coast of the United States has a 20 percent chance of tropical or subtropical development through Friday before upper level winds become unfavorable. Areas of low pressure off the Central American and African Coasts are also each given a 20 percent chance of development over the next 5 days. Neither appears to be a threat to the United States.

A strong storm system will move across the nation on Friday. For the local area, an approaching cold front will force showers and thunderstorms to develop. Instability will be high enough to support thunderstorms but a lack of wind shear should keep them from turning severe. Atmospheric moisture content is rather high for the time of year and given the instability and frontal forcing, some downpours could possibly lead to some isolated street and poor drainage flooding. Frontal passage is expected to occur Friday evening. This front will slam on the brakes as it approaches Alabama on Saturday. While the showers will taper on the stable west side of the front, some clouds will linger. Moisture return will begin due to onshore flow Sunday. The old front will jog back to the north and into our area by Monday inducing more showers and thunderstorms through at least midweek. The next cold front will press into the region on Wednesday but is not clear if this will stall and hold rain in the forecast or clear the area with another stretch of cooler temperatures.