Temperatures will continue to climb over the weekend with near record warmth possible on Sunday. The first good chance at area wide rainfall in more than a week is expected on Monday.

Up Next: It will feel a bit muggy on Sunday morning with lows in the mid 60s. Sunday afternoon will be especially warm with high temperatures topping out in the mid 80s. If Metro Airport can reach 87 degrees, it will be the warmest temperature since October. Just 85 degrees would be good enough to tie a record high that dates back to 1945. An isolated shower or two could develop north and west of Baton Rouge on Sunday afternoon, but the better chance for area wide showers and thunderstorms will come with a slow moving cold front Monday into Tuesday. Cooler air will arrive behind this front but it appears enough moisture will linger on the backside to keep some showers around on Tuesday and Wednesday. Most locations will receive about an inch of beneficial rain through the middle of next week. CLICK HERE for your detailed 7-Day Forecast. 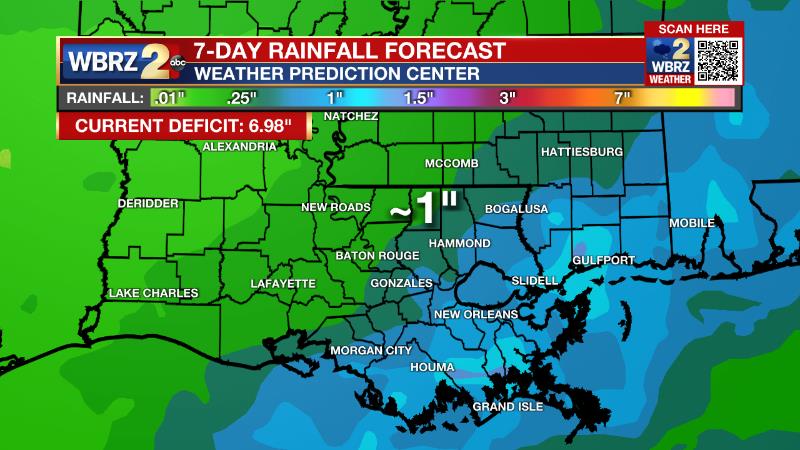 The Explanation: Winds will take on a more persistent southerly direction overnight into Saturday advancing enough moisture inland to elevate dew point temperatures and keep low temperatures in the 50s instead of the 40s. Additionally, onshore flow will allow some clouds to develop. As this continues into Saturday, the added clouds will prevent high temperatures from warming too much, but they will still be able to climb into the 80s. Into Sunday, low temperatures will be almost muggy in the mid 60s followed be near record high temperatures in the mid 80s during the afternoon. A weak upper level disturbance will move northwest of the area and could feasibly trigger an isolated shower—especially north and west of the Capital City. As that disturbance moves along, there will be a brief dry period late Sunday into Monday. Another upper level trough of low pressure will move across the Lower Midwest to begin the new week. A cold front will nudge toward the area and tap into the unseasonably warm and moist air mass to kick out scattered showers and thunderstorms. Right now, ingredients do not look favorable for any severe weather. With upper level winds essentially parallel to the front, there will not be much support to push it through the area quickly. It will slow near the coast Monday night into Tuesday, but cooler air will filter in dropping temperatures into the 50s and 60s. As another fast moving disturbance moves northwest of the area on Tuesday, it will cause some moisture to pull back across the front and generate a few more showers. Yet another disturbance will push across the region on Wednesday—this one a little more vigorous and a bit further south. Another front may be pushed through the area with scattered showers especially early in the day. Over the three day stretch, an inch or so of rain is possible—not much, but enough to put a small dent in the drought. By Thursday, that front will clear the area leaving behind a cooler and drier air mass.