The area did not meet the heat advisory criteria on Friday. However, it certainly was steamy with all viewing area locations spending some time with triple digit feels-like temperatures.

Next 48 Hours: A mostly clear and muggy night is ahead. Low temperatures will struggle to dip much lower than 75 degrees. Plenty of late July humidity will mean the afternoon hours will have feels-like temperatures in the low 100s right through the weekend. Nights will be sticky and unpleasant in the mid 70s. If you have outdoor plans, it is back to the typical summer routine. While nobody will be washed out, isolated thunderstorms could chase a few indoors during the afternoon hours. Activity on Saturday will probably hold off until late and position east of the Mississippi River. Sunday will have slightly more rain coverage in the afternoon. Always take shelter inside if you can hear thunder or can tell via a weather app. that lightning is within five miles of your location.

Be on the lookout for colorful sunsets this weekend! A layer of dust in the atmosphere all the way from the Saharan desert could make for some good picture opportunities.READ MORE, HERE.

Up Next: This status quo pattern will carry into next week with only minor day-to-day variations. Monday may feature a bit less areal coverage in showers and thunderstorms. Tuesday through Thursday, a weak upper level disturbance crossing the Gulf of Mexico from east to west will slightly increase the coverage for showers and thunderstorms but this will be a nuanced aspect of the forecast. After all, in mid-summer, the weather can be pretty consistent in south Louisiana and southwest Mississippi. CLICK HERE for your full 7-Day Forecast. 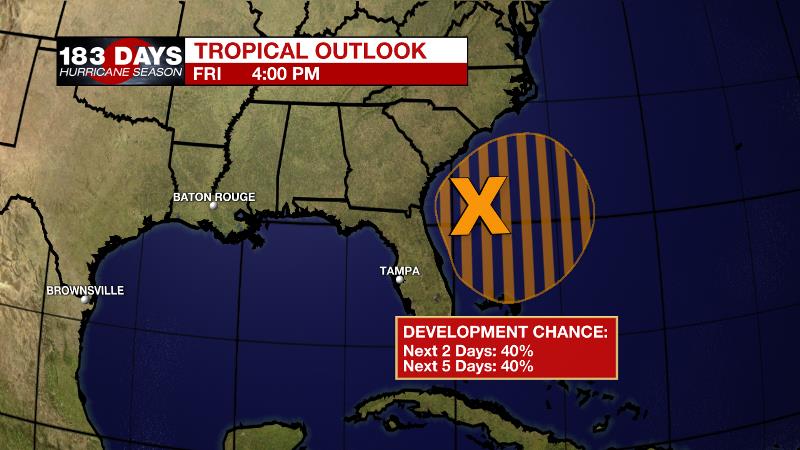 The Tropics: An area of low pressure located off the southeastern United States coastline continues to produce a large region of disorganized showers and thunderstorms. Environmental conditions appear marginally conducive and there is a 40 percent chance that a tropical depression could form over the next couple of days as the system meanders over the Gulf Stream, just offshore of the southeastern United States. Interestingly, there is an upper level low pressure feature trailing this system that will either pass south of or merge to move across the Gulf of Mexico next week which could provide an uptick in local rain chances. Other than than, no serious impacts are expected. For the latest tropical forecasts and information, visit the WBRZ Hurricane Center as we navigate all 183 Days of Hurricane Season.

The Explanation: An upper level ridge that caused the mainly dry, hot conditions on Friday will center just a little west of the local area over the weekend. Heat will remain a story although the shift of the ridge will mean there is a slightly better chance for some isolated, cooling showers in the afternoon. Saturday afternoon, a weak upper level impulse will clip the northeast corner of the forecast area, which could trigger some late showers and thunderstorms. At this time, there appears to be a better chance of activity east of the Mississippi River. By Sunday, a weakened upper level ridge will leave enough instability for daytime warming and the marine breezes to trigger convection during the afternoon hours. By Tuesday, Wednesday and Thursday, a weak upper level low is expected to traverse the Gulf from east to west and this could restore scattered daytime showers and thunderstorms for 36 to 48 hours. Still, nights would be largely quiet. As we move into the latter portions of the workweek there are some indications that an upper level ridge will rebuild across the central U.S. with vengeance and really increase the potential for big heat by next weekend.