Showers and thunderstorms will scale back through the weekend. While still hot, some slightly drier air could be around the corner.

The Next 24 Hours: As showers subside overnight, skies will partially clear with calm winds and low temperatures dipping into the mid 70s. One more relatively active day is then expected before a short intermission. Saturday will find high temperatures in the low 90s before scattered showers and thunderstorms develop—mainly after lunchtime.

The Long Term Trend: A much drier trend is expected for Sunday and Monday, but the tradeoff will be hotter temperatures. Beneath partly to mostly sunny skies, both afternoons will top out in the mid 90s, with feels like temperatures in the 100 – 105 range. Nights will be muggy in the mid 70s. A weak cold front will pass through Monday evening. While a shower remains possible with the front, activity will be very isolated. We may also feel some steam relief and temperatures 2-4 degrees below average (93/74) for Tuesday and Wednesday. During the latter half of next week, the front will retreat north over our area and stall, with a weak area of low pressure developing along it. This could spell a prolonged wet stretch for parts of the region—especially the eastern Gulf Coast. 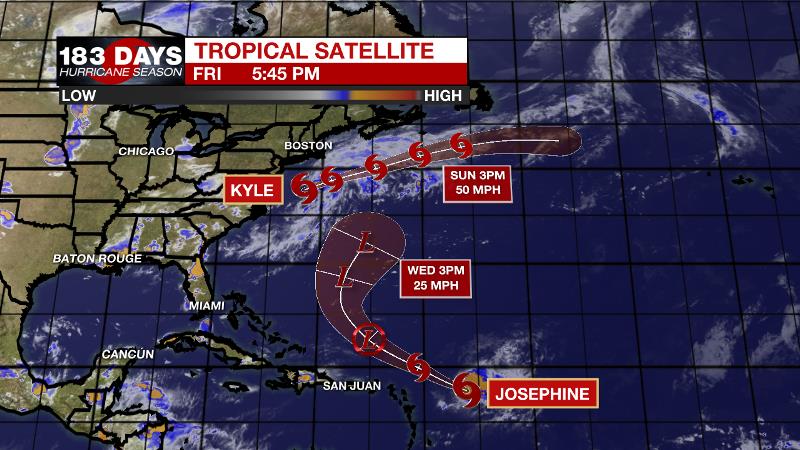 The Tropics: As of 4pm Friday, Tropical Storm Josephine was producing 40mph winds moving west-northwest at 15mph about 400 miles east of the northern Leeward Islands. The storm will continue on that motion for the next few days, possibly strengthening a little. The storm will pass north of the islands over the weekend and likely diminish early next week. Tropical Storm Kyle formed 200 miles east of Atlantic City, New Jersey. With maximum winds of 40mph, the storm is ripping east at 20mph. The storm will continue on that path and accelerate. Though it could strengthen slightly, it will turn post-tropical by early next week. Neither system poses a threat to the U.S.

The Explanation: On Saturday, an upper level trough will release to the east, relieving some of the available instability and forcing, but daytime warming and marine breezes will stay spark isolated to scattered afternoon storms. Moisture should scale back quite a bit by Sunday, as a large ridge over the western U.S. builds slightly east over our area. The result will be a warmer, sinking air mass thus tapering if not eliminating showers and thunderstorms. The pattern gets very tricky next week. A few more shortwave troughs will ride the eastern flank of the trough and dig into the existing trough over the Southeast. A blocking pattern is likely to develop—that is, a large ridge in the western U.S. and over the Atlantic. The result will be a trapped trough over the Eastern U.S. and a few weak cold fronts may take advantage of this avenue. With one or two clearing the Metro Area, there could possibly be a few days of drier air and below average temperatures for the middle of next week. Consequently, as it is August, the front will lose its integrity and may retreat north over the Gulf Coast. Forecast models show a ripple of low pressure developing along this front and nearing the coast. These two features, along with ample instability created by the unusually deep trough over the Southeast, could lead to some periods of heavy rain.